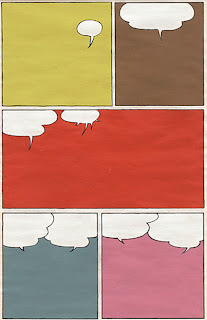 Rosalind Krauss wrote an important essay about how perplexing the concept of sculpture had become at the end of the seventies: Sculpture in the Expanded Field (1979):

The expanded field of comics may spread in time and social context (Medieval comics, for instance), but also in space (and social context): onto the gallery walls. Again, this process goes against a fixed concept of comics as low mass printed art.

Original comic art has been exposed in galleries, museums, and comics conventions (a strong tradition in Europe's comics conventions gives original art an important role as an attraction factor), but I don't mean that. What I mean is comic art meant to be exposed as unique objects on gallery walls. Most people would call these objects paintings inspired by comics. Don't take my word for it though, the artists themselves call "gallery comics" to what they're doing. Sorry to indulge in name-dropping, but I mean: Christian Hill, Mark Staff Brandl, Howie Shia. Andrei Molotiu could also be part of this list, I suppose; ditto Paper Rad: they all have strong links with the comics milieu. As for Brazilian painter Rivane Neuenschwander, American painter Laylah Ali and Swiss painter Niklaus Rüegg, I have no idea, but both Ali and Rüegg are interesting examples because, not only did they paint, their paintings were also original art (in the comics sense) for the publication of comic books (by the MOMA and Fink Editions, respectively).

At the risk of stating the obvious, words and drawings printed on paper may be what first comes to our minds when the word "comics" is mentioned. But the "language" of comics can also exist, in my humble opinion, in a painting on the wall (or on a computer screen, for that matter). I'm writing in English either if I write with a nib on parchment or paint words three stories high with a brush.

During the fifties Brazil was at the avant garde of poetry. Inspired by Stéphane Mallarmé's Coup de dés, Guillaume Apollinaire's calligrammes, Dadaism, Ezra Pound's Imagism, Haroldo and Augusto de Campos, Decio Pignatari, Pedro Xisto and others created Concrete poetry. In a Concrete poem typography and the pages' space is as important as words. Sounds are more important than meaning (or new meanings are born when words are reorganized on the space of the page).

In 1967 the Process-Poem was a new development that approached poetry and comics even more. Álvaro de Sá abandoned words to do comics (comics critic Moacy Cirne was also part of the movement).

Apart from being, with the Brazilians, one of the creators of Concrete poetry, Swiss Eugen Gomringer advocated an international visual poetry by the end of the sixties. A poetry that used photos, words, and easily recognizable graphic symbols. It also had, sometimes, a clear political message.
This is, in broad strokes, the international context in which Ana Hatherly's O Escritor (the writer) was written, drawn (1967 - 1972) and published (1975).

Image:
Zé Carioca no. 4, A Volta de Zé Carioca (1960). Edição Histórica, Ed. Abril by Rivane Neuenschwander, 2004. Rivane erased all characters and backgrounds from a Brazilian Disney comic.
Posted by Isabelinho at 9:34 AM

Not that "what is" discussions are always uninteresting, but, man, defining a medium gets pretty tedious and tends to go nowhere. Seems to me that you're taking what amounts to the institutional theory of art, which I take to be common sense. 'Comics' is what exists in the comics milieu CM. When object X doesn't reside in CM, but an inhabitant of CM notices certain covalent attributes of X with CM's objects, then X becomes part of CM (as per your example of "comics language") -- moreso as other CM inhabitants begin to accept the shared attributes between already acknowledged objects of CM and X.

Hey Charles:
This post is part of a larger project in which I tried to do two things: 1) separate a tradition of comics as mass art (the restrict field) from an expanded field composed of: a) cartoons (Saul Steinberg et al), b) Medieval Comics (or Bizantine, Roman, etc...), c) Fine Art examples (Picasso _Songe et Mensonge de Franco_, Pierre Alechinsky, etc... concrete poetry), d) wordless comics (Frans Masereel, Lynd Ward, etc...); 2) separate "the language" from a particular support (the printed page).
I don't say that you're not correct, but I'm hardly an institution. This is just one person expressing a few ideas. It's what could be, not "what is," to quote you.

That's worthwhile. By "institutional theory," I meant this.