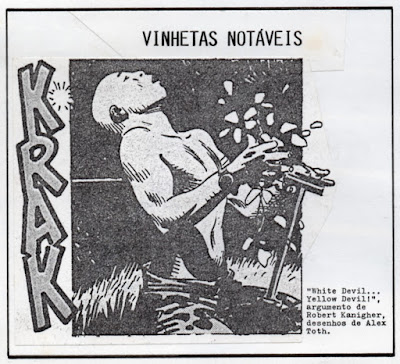 This post could also be titled: White Flowers... Red Flowers.

I started writing about comics more than 25 years ago in the so-called fanzines Nuxcuro and Nemo (I don't like the term because I'm no fanatic, of course). That said, Manuel Caldas' amateur magazine Nemo was first published in 1986. I came on board in # 4 of the second series (August 1990).

So, as you can see above, very early (in the next issue, really) Manuel Caldas accepted my suggestion to include a "Vinhetas Notáveis" [remarkable panels] section. What he doesn't know to this day, because I never told him, is that the above was not the remarkable panel that I intended. The real one is shown below:

"White Devil ... Yellow Devil!": I don't know who the colorist was? The Grand Comics Database doesn't help. Neither does Alex Toth.

This remarkable story was republished in Sgt. Rock Special # 8 (June 1990). This means that it was fresh on my mind and it impressed me enough to ask Manuel to open "our" brand new remarkable panels section with one of its panels. Below: Greg Theakston's colors for the same panel:

The dirt was colored differently.
According to what I call my Nelson Goodman theory of comics fakes recoloring should be banned. Below we can see the first page of the story as originally published: 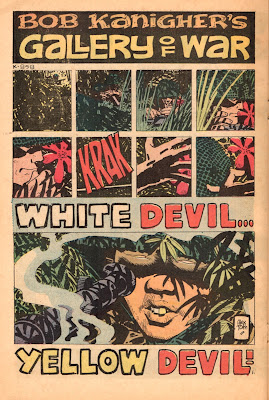 Anyway, let's see what Alex Toth said about it: 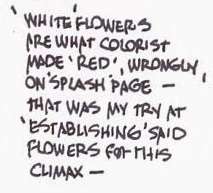 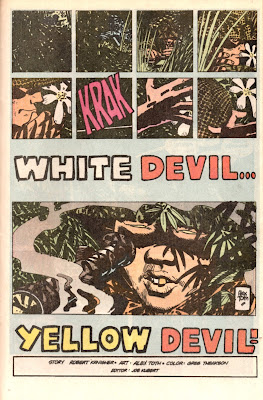 There are few issues in the area of film preservation that arouse more anger than the issue of colorization. That is because it is an issue involving taste, and, to put it bluntly, anyone who can accept the idea of the colorization of black and white films has bad taste.

Why did (and does) the comics industry and comics readers accept  such a thing? Because, you see, not all comics creators were born equal. There's a hierarchy that mostly goes like this: 1) the drawer; 2) the writer; 3) the editor; 4) the inker; 5) the colorist; 6) the letterer. As you can see above the header of "White Devil ... Yellow Devil!" was erased from the republished version. This happened, methinks, because it gave the writer too much of a star status (which is too much for a # 2). This means that colors can be changed, but changing some master's drawings isn't easily accepted by readers (or should I say, watchers?).

But let's go back to the first page of "White Devil ... Yellow Devil!"... Among other minute differences Greg Theakston corrected the anonymous colorist's, according to Alex Toth, mistake: the white flowers at the end were colored red at the beginning. I would say that this (the correction, I mean) shouldn't have been done and yet...

Greg Theakston's recoloring in this story is quite good and in many ways quite faithful to the original color. There are hundreds or thousands of horrible recoloring jobs out there (mainly using the worst nightmare of comics coloring: computer generated gradients that turn every surface into pristine plastic). So, I would say that this is a really bad choice to attack fake comics. And yet, I chose it for a purpose: since it is a borderline case between what should (only the original material should be reproduced) and shouldn't be done, I'm inclined to agree that correcting a blatant mistake is acceptable. On second thought the democracy of comics creators tells us that the original colorist has as much right to the integrity of his or her work as everybody else (the colorist was usually a woman, which is an additional reason, in the boys club that is the comics industry, to disrespect colors). I'm not even sure if we can call the red flowers a mistake. Alex Toth didn't own the story. He certainly didn't own the colors, so, if the colorist chose to color the flowers red on page one who is he to say that it was a mistake? If Sheldon Mayer, the editor, said nothing, the colors on the first page were always meant to be red, the color of blood, period. (Kindness is what kills both "devils" and we can metonymically link kindness to flowers.)

In the end the question is: who created this comic? Is Greg Theakston one of the creators? The answer is obviously and rotundly, no, he isn't.

Posted by Isabelinho at 2:59 PM No comments:

Posted by Isabelinho at 2:30 PM No comments:

The Last One With a PS - Coda

I'm seriously pondering the possibility of changing my blog's title to "This Art Form Deserves to Die!" What do you think?

Also, to know why, if you read French, read this.
Posted by Isabelinho at 6:27 AM 11 comments:

The Last One With a PS

Below is the last elongated panel by Hugo Pratt on the cover of Misterix.

By the way, I continue to read, on some French sites, that Hugo Pratt wrote this and that WITH Oesterheld. It's an improvement since the days when Oesterheld's name was completely forgotten, but get this people: Hugo Pratt didn't write a word in "Sgt. Kirk", "Ernie Pike" (except in one story, at the end of the run, that he did alone), or "Ticonderoga". Please, get your facts straight once and for all!... Enough already!...

Oh, and, another thing: the above image was never reprinted, as you see it above, since it was first published almost 60 years ago. This is indeed an amnesiac art form! On top of that the historiography of comics is full of false assumptions, like the one above, put into circulation by incompetent amateurish "historians" and adoring hagiographers. This art form deserves to die!...
Posted by Isabelinho at 3:11 AM No comments: 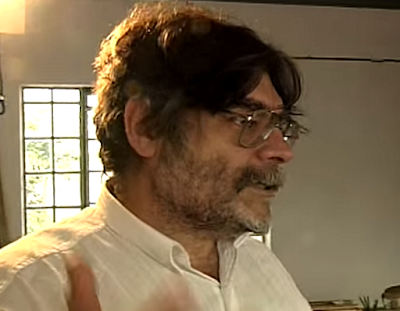 The guys down there at The Comics Journal did a great job to remember Geneviève:
starting with her own words and then going to a great obituary by Rob Clough to finish at a moving rememberance by Anders Nielsen.

You just look at that drawing below with a menacing cloud over her and the bright colors of her daughter's drawing mirroring her happy last moments with her. What really troubles me though is the empty word balloon. Maybe these are the words she will never be able to tell her as she grows up. It's sad beyond belief...

I hope that no one minds if I publish this great work of art here. 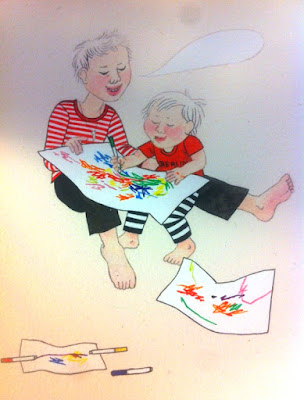 One last thing: I loved the words of Dylan Horrocks:

She introduce herself [at Angoulême] and gave me the most beutiful little book I'd seen in ages. [My wife] Terry and I hung out with her a bit that week and she treated us like co-conspirators, talking about the weirdness of Angoulême and her own feelings of disconfort. She was like a wild animal creeping around a zoo, looking in horror at the cages, afraid she might end up in one. Later, she sent me comics and records, and we saw her again when she came to New Zealand to play some gigs. I'm so glad we got to see her play. Her comics are among my favorite art of any kind, ever. Sometimes this world seems so cruel, and this is so awful and sad. But her art makes me fall in love with the world, with all its darkness and pain and beauty and love, and looking at it now is like a gift. She never went in the cage.

Posted by Isabelinho at 9:59 AM No comments: 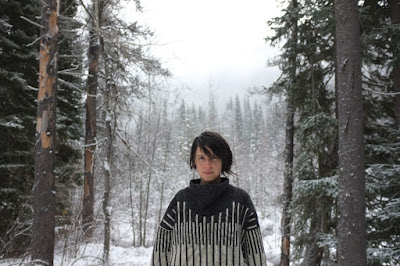 I'm still in shock! Geneviève Elverum died three days ago! Her legacy in comics history is inversely proportional to the days she lived on earth!