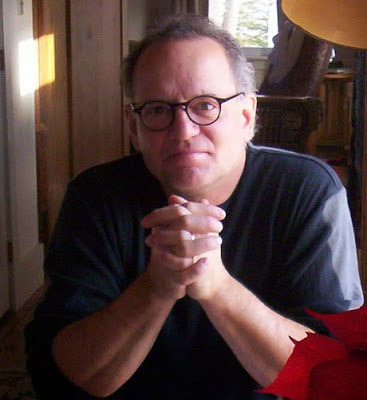 The Crib is in  mourning yet again. David Beronä, the comics scholar who dedicated his whole attention to wordless novels, passed away. Here's how he presented himself on his site:

In addition to my professional duties as the Dean of Library and Academic Support at Plymouth State University, I have  researched the history of wordless books and woodcut novels, referred by Scott McCloud as "missing links" in the development of comics. In Wordless Books, I have narrowed my focus on the works of Frans Masereel, Lynd Ward[,] Otto Nuckel, Helena Bochoraková-Dittrichová, William Gropper, Milt Gross, Myron Waldman, e. o. plauen, Istvan Szegedi [...] Szutz, Giacomo Patri, amd Laurence Hyde. The themes in these wordless books show a powerful relevance to our world today, the significance of wordless stories, and the growing importance of visual narratives in all cultures.

Posted by Isabelinho at 8:05 AM No comments: 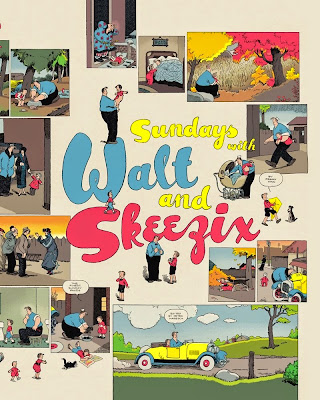 After my last post I thought a lot about newspaper comics reprint coloring. According to my (Nelson Goodman's) theory, recoloring is out of the question, but being "amenable to notation" (it was Kim Thompson who called my attention to the fact that color guides are indeed notations) colors may be remade from scratch if the guide is respected. On the other hand colors may be autographic if color proofs are used (as in Fantagraphics' Prince Valiant edition) or fac-similes of printed pages are made.

Anyway, I think that, thankfully, the days of recoloring (usually with appalling results) are over and most reprint collections today respect the original color.

Are they all equally successful, though? That's another problem entirely...

The most (only?) important text about these matters was written by Zavier Cabarga in his intro to Gasoline Alley The Complete Sundays, volume 1 (Dark Horse, 2014). Here are three quotes with some comments by yours truly:

Typically in old newspaper comics the color registration [...] was pitiful and the ink saturation weak.

I remember a time when I liked the out of register colors. This may be linked to the modernist idea that artists should show their process, but it's more likely that I wanted to see fallible human hands behind the machinery. I like imperfections. I may admire the craft involved in folk art, but it's the naivete that I find appealing. Anyway, all this has nothing to do with coloring... As for the weak saturation, I rather prefer it because it respects the drawings. Highly saturated or highly shaded colors provoke a muddiness and a visual heaviness that I find unappealing as we have seen in my last post. Thankfully I don't need to deal in this post with that scourge of recoloring: computer generated gradients!...


[In color proofs] the hues are usually very dark.

Hear! Hear! I absolutely agree (again, as we have seen in my last post). Below we can see Zavier Cabarga's laborious process (that's what Paul Baresh should have done, but didn't!). 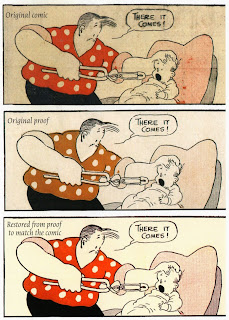 CMYK process inks are crass and unappealing. In old comics, the colors were richer, more somber, more elegant, such as Prussian blue or deep turquoise, vermilion orange-red or burnt sienna [sic], and golden yellow or ochre. In my restorations I have tried to retain these wonderful old-time colors.

Indeed! In the Dark Horse Gasoline Alley edition yellow may be wheat and red may be amaranth or crimson, for instance, which is great, but there are three minor problems in my humble opinion: 1) the paper is glossy which is a no no in my book (fortunately it's not bright white, but magnolia); 2) in spite of what Zavier Cabarga says above some hues are still too dark (this may be the printer's fault though); 3) the drawing is always reproduced in a thick black which, paradoxically, may be distracting if there's a certain amount of it as in Walt's pants (see below). 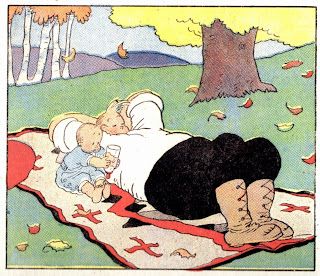 Sunday Press. My scanner darkened the original black. Notice the light yellow in the tree canopy. As I found out during my research old newspaper colorists preferred it to other, more aggressive, yellow variations. 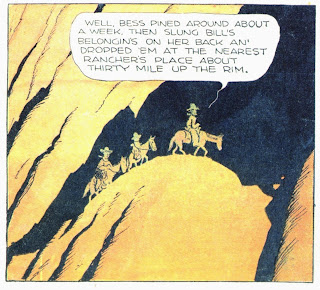 The gray above is a shadow. Being a thick black it would simply be a blot.

Don't get me wrong though, as I said, this is me clearly nitpicking.

My favorite Gasoline Alley reprint is Peter Maresca's Sunday Press wonderful (wonderfully standard sized - Dark Horse's, by the way, is tabloid) Sundays With Walt and Skeezix (see above). It's a fac-simile project reproducing the original newspaper pages in their glorious colors (huge dots and all). It's very similar to an old Drawn & Quarterly reprint (see below). The matte paper color of the Sunday Press edition is absolutely perfect (not so their Little Nemo's which is a bit too deep). 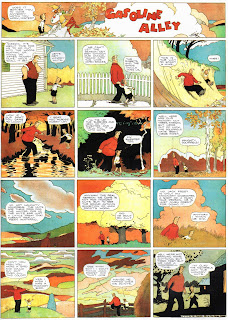 The whole page in Drawn & Quarterly volume 3. It was published four times smaller than the newspaper standard size.

Drawn & Quarterly's also has the same problems (to me), with glossy paper and thick black, as the Dark Horse edition, but it's a pioneering effort with wonderful results. Being smaller though, Walt's trousers don't jump at us (so to speak) as much...

Chris Ware's pastiche colors in the cover of the Sunday Press book above are great (I don't like the electric yellow though), but lack the dots diminishing the contrast between the 25%, 50%, 100% areas and turning everything a lot more impersonal and dull (as he usually does). On the other hand the fac-simile colors and drawing lines aren't as sharp sometimes, but.nothing's perfect...

Note: many thanks to Manuel Caldas for our conversation about comics coloring during last week!
Posted by Isabelinho at 7:20 AM 1 comment:

The Coloring of the Prince Valiant Series Published By Fantagraphics

Fantagraphics blew their own horn in 2011 (or... Kim Thompson did; I miss you terribly, Kim!) praising their new Prince Valiant reprint collection. Kim gave a "special tip of the sword" back then to Paul Baresh who retouched/corrected the old color proofs donated by Foster to Syracuse University and used (Fanta deserves all the credit for it) for the first time in this reprint collection. Unfortunately, I can't say that I agree with Kim (we rarely agreed on anything, by the way, but I respected his intelligence and everything that he did for comics)...

I don't want to put Manuel Caldas' (in Spanish) shoes on, of course! He's, after all, the foremost authority in all Valiant and Foster related things (him and Brian M. Kane, I guess). If you don't read Spanish, I'll just sum up his opinion saying that Manuel thought that Fantagraphics used the best possible material to do a definitive Prince Valiant edition, but didn't. Among other things he mentioned the small size of the books and how poorly the material was scanned (by Syracuse U., it seems, not by Fanta) blurring the art. In his own Cerebus TV, Dave Sim says more or less the same thing while comparing the reprinted pages with old newspaper pages.

That's what I'll do below too adding what, to me, is the biggest problem in these reprints: color saturation. 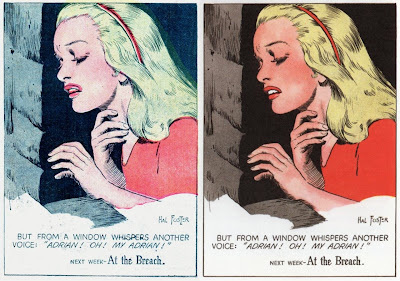 As you can see above the colors are a lot less saturated on the newspaper page. The result is a lot lighter; so, the drawing isn't blurred and overwhelmed by the coloring. (The out of register red on the character's lips is another story.) 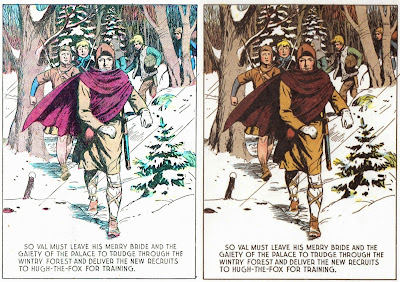 In the example above we can see how Prince Valiant's cape became a formless blot. Notice also how some lines blurred and bleed until becoming (or almost becoming) black surfaces (the stick on the left, the shadows on the snow). 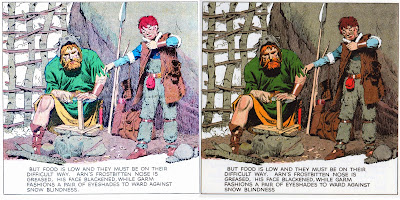 The example above is the more telling of the three, methinks. The Fanta panel is so heavy that the drawing details disappear almost completely under the saturated color. 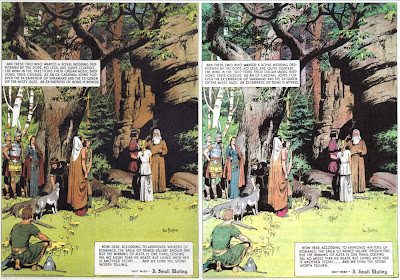 I'm comparing above the Fanta edition with a page published in one of the Tarzan volumes published by NBM. Do I need to say more?

All in all, it's a shame that Kim Thompson didn't accept Manuel Caldas' offer to work in this collection. With a little increase in size it would definitely be the definitive Prince Valiant reprint. No doubt about it.
Posted by Isabelinho at 10:44 AM 11 comments: