Seth was interviewed in 2006 for the POV website. Here's what he said at the time:

Seth: I am plowing ahead with the second part of my book Clyde Fans. I hope to have a good chunk of it done by the end of this year and the whole book hopefully finished up in another year after that (with luck).


Eight years later it is safe to say that we were out of luck in 2007. We're still out of luck in 2014.
A graphic novel that's a work in progress for the last seventeen years (and counting) may present some inconsistencies in style (artists evolve, of course; or, in this case, regress). To see if it happened let's perform a little experiment: 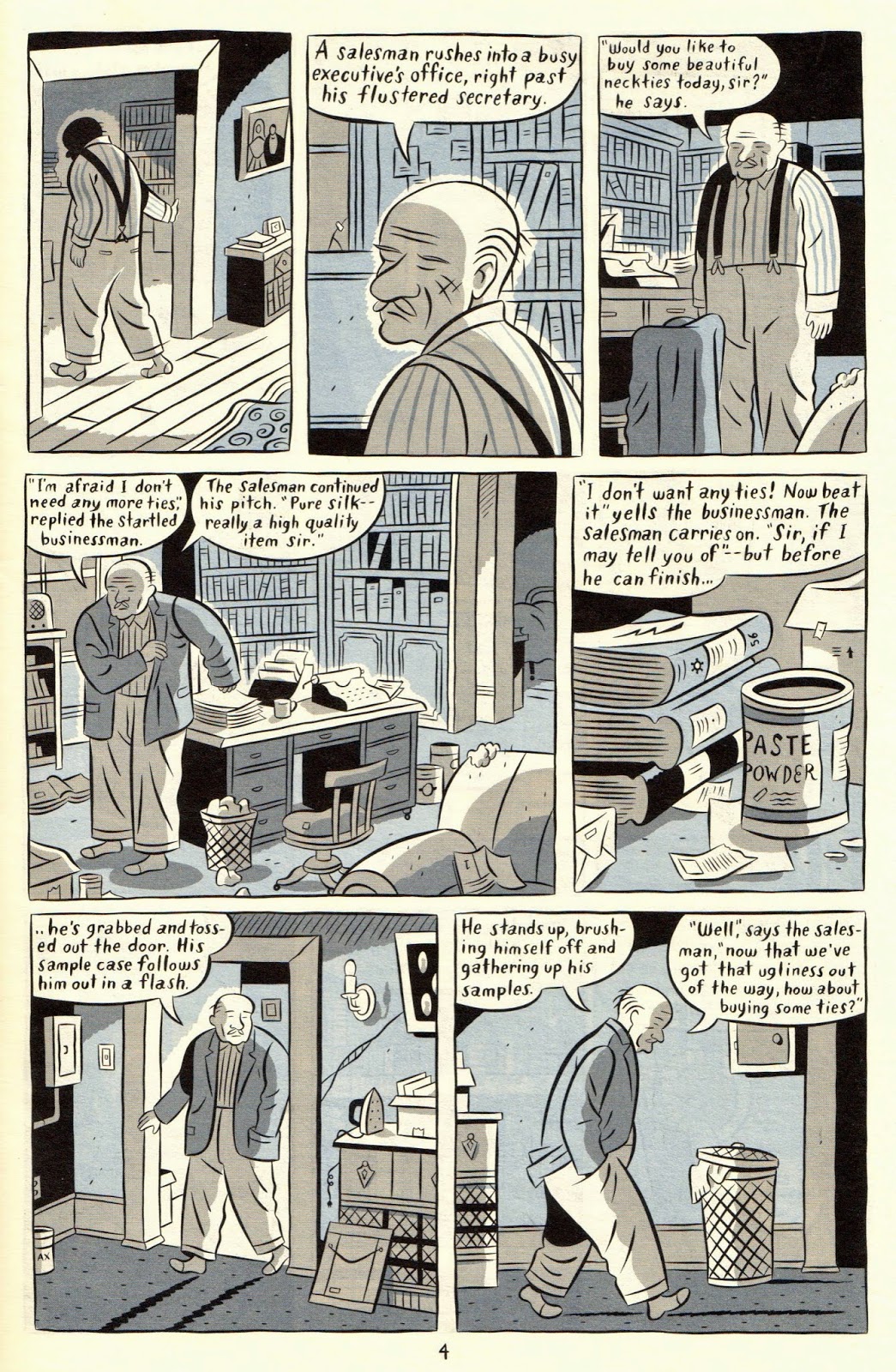 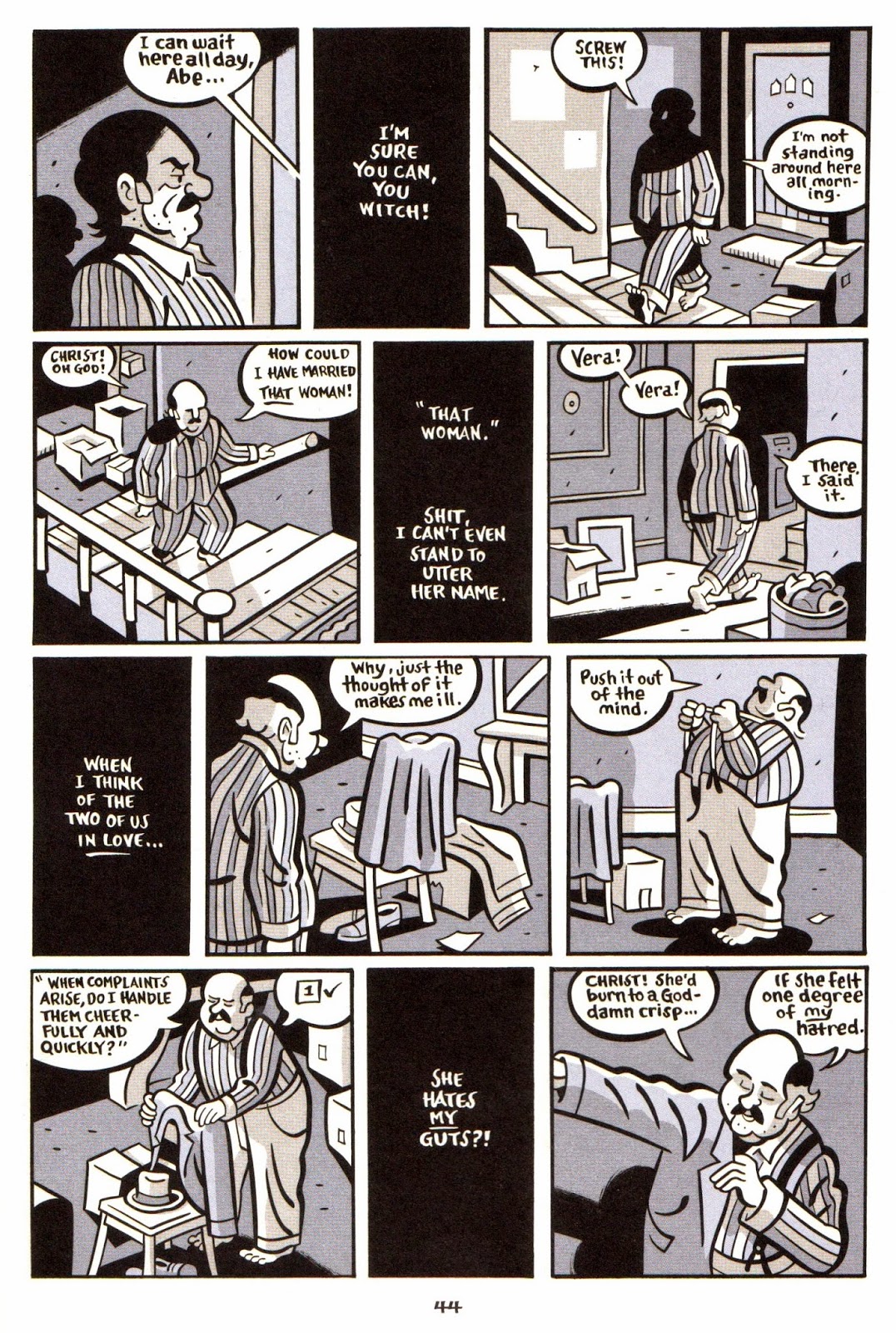 Looking at the two pages above I'm tempted to just say: judge for yourself! The differences are glaring and they aren't flattering for the Seth of 2013, far from it...

Seth became more cartoony in time: Abe's body is more realistically proportioned in 1997 than in 1975. Maybe he grew up, but I doubt it. The attention to detail gives life to the set in 1997 being just a minimalistic void in 1975. This isn't bad, per se, of course. I'm just pointing inconsistencies out. 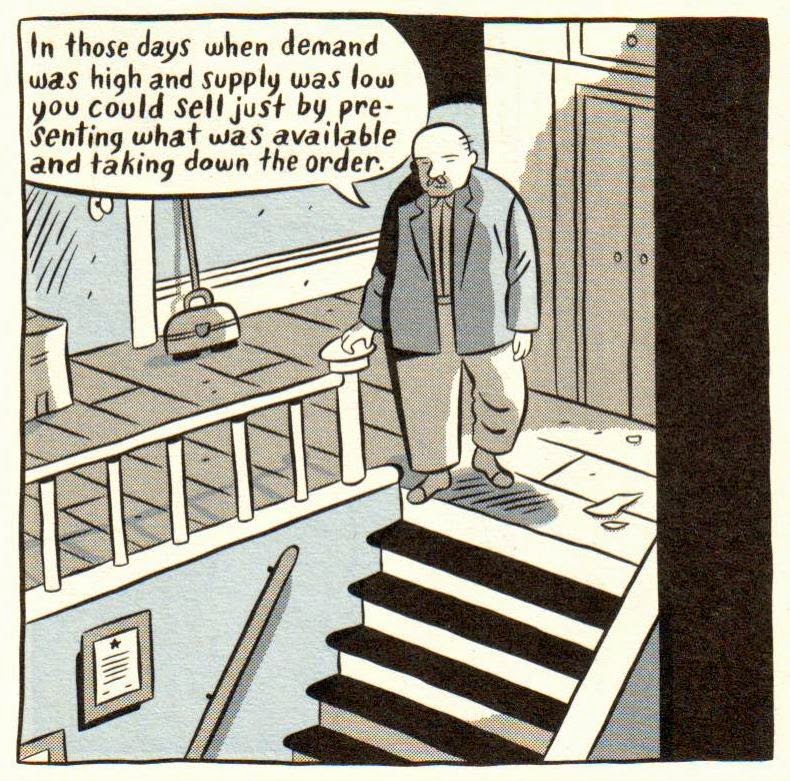 Talking about inconsistencies, compare the stairs in the above panel (page 7 of "Clyde Fans: Part One") with the supposedly same stairs in Part Four. The stairs in Palooka Ville # 21 aren't even well drawn.

But what shocks me the most is the quality of the line (or lack thereof). The shading is also a lot better in the former example. Not to mention the beige color of the paper (a lot better than the white of Palooka Ville # 21 in my humble opinion).

Judging from what appears in Palooka Ville # 21 (two more stories: the awfully drawn "Rubber Stamp Diary" and "Nothing Lasts" - ditto) Seth is more used to sketch in his sketchbooks these days than to calmly sit down and draw comics pages as they should be done. I know that we all need to pay our bills and the only comics that put real bred on the table are bad comics, but if an artist dedicates her or himself to greener pastures (illustration, for instance) the toll to pay is the creation of second rate work. Art is too demanding to be done in our spare time.

Clyde Fans will be a masterpiece? I'm not so sure now... It could have been, if finished many years ago, methinks...

Gregory Gallant (aka Seth) and I were both born in the early 1960s. This means that we lived the end of the pamphlet, as a vehicle for the serialization of alternative comics, and the rise of the graphic novel era in which we are living in. I have no qualms with that. On the contrary: who, being sound of mind, wants to go into those awful spaces known as comic book stores in order to buy great comics? They don't fit in there (the comics, I mean), discriminative buyers don't fit in there either...

What's my problem, then? (It's not with the term "graphic novel," that's for sure.) My problem is that during pamphlet days, when it started being serialized, I thought that "Clyde Fans" was a masterpiece in the making. Meanwhile I've been deceived by years and years of useless waiting...

Let's go to the cold facts:

But, then... Seth started churning out meaningless graphic novels like Wimbledon Green (2005), George Sprott (2009), The Great Northern Brotherhood of Canadian Cartoonists (2011). "Clyde Fans" continued in Palookaville (# 20, September 2010; # 21, September 2013), but the hope of seeing it complete is getting dimmer and dimmer... 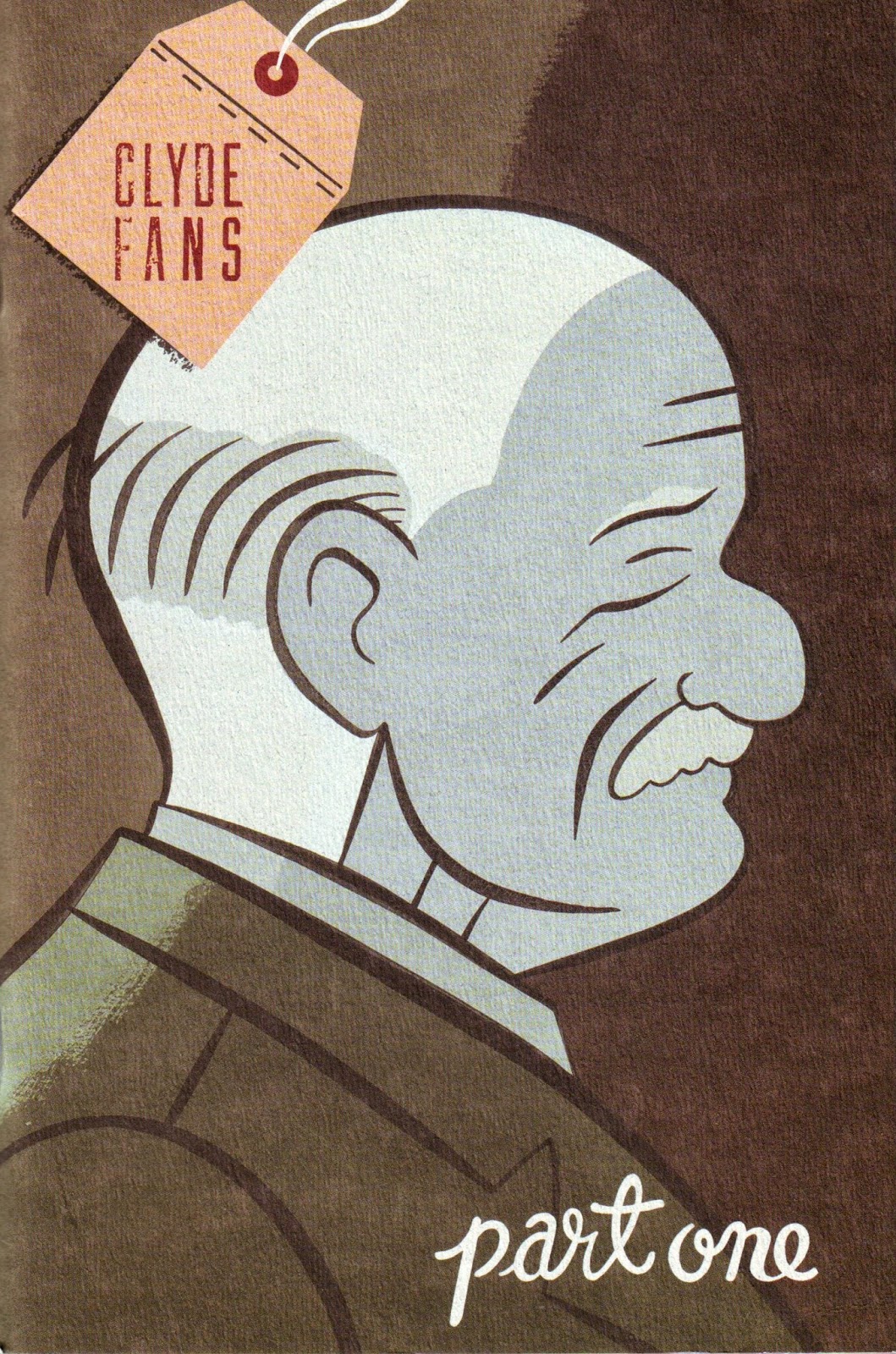 Seth, Clyde Fans Part One, Drawn & Quarterly, August 2000 (The first in a projected five booklets - which means that, initially, at least, Seth planned 5 parts; the fourth part is currently being serialized in Palookaville.) 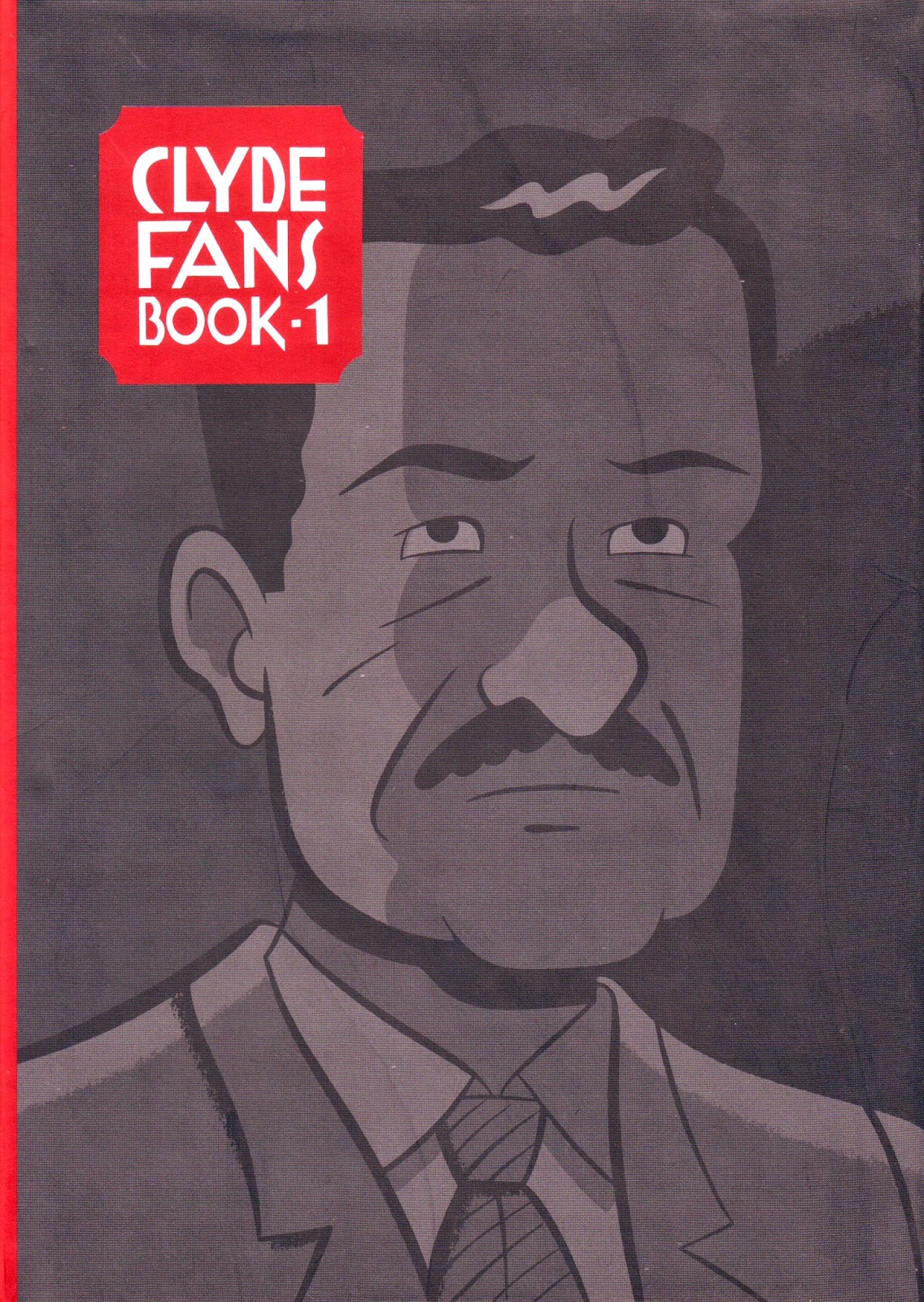 Seth, Clyde Fans Book One, Drawn & Quarterly, June 2004 (Clyde Fans is now projected for two books - graphic novels; four parts instead of five? Since this book was published, ten years ago! Nothing! Is it reasonable to expect this kind of loyalty from readers?)

What happened exactly? Maybe I should have asked Seth when we met in Oslo, Norway, in 2012, but I didn't, sorry! What I can do, then, is to speculate: was "Clyde Fans" being poorly received by Palookaville readers provoking a massive drop in sales? Did Seth lose interest? As I said, I really don't know... What I do know is that another comics masterpiece gets a more than erratic publishing history.

A similar thing happened to Jason Lutes' Berlin... Continuing talking about Drawn & Quarterly I should also write a post about how Chester Brown didn't meet my high expectations, but that's another story...

Posted by Isabelinho at 7:55 PM No comments:

Meanwhile, to be a bit childish myself (it happens), here's one of my favorite covers drawn by Hugo Pratt. Design wise (unfortunately I don't know who the designer was; Fred Zulauf, Juan Herliczka?) I love how the fire destroys the logo. 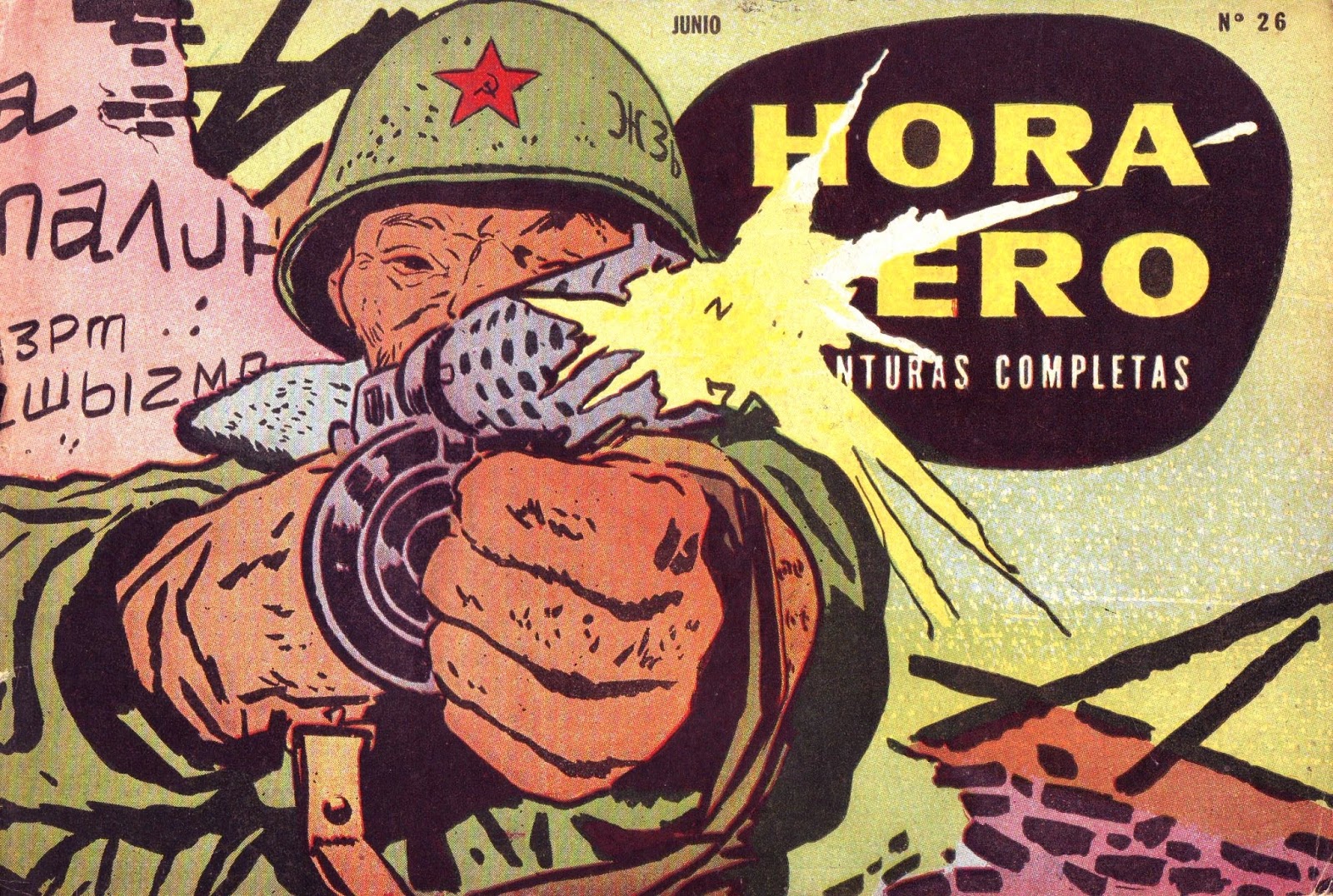 What Is a Hero? 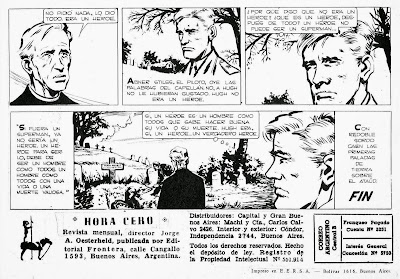 I said on this blog already that my all time favorite comic is "Amapola Negra 'Black Poppy'". In the page above (number 86 in the mini series) lieutenant Hugh Probst (former co-pilot of the Black Poppy, a B-17 bomber fortress) is being buried. The priest calls him a hero. Here's what lieutenant Abner Stiles (Black Poppy's pilot) is musing: "[...]Hugh was no hero./ Why did I say that he was not a hero? What is a hero, after all? A hero can't be a superman.../ Being a superman he can't be a hero. A hero must be simply a man like all of us. A man like all of us with a valuable life or a valuable death. [...]"

Root Hog or Die (trailer) -- a film about John Porcellino


See also John Stafford's blog.
Posted by Isabelinho at 3:47 AM No comments: