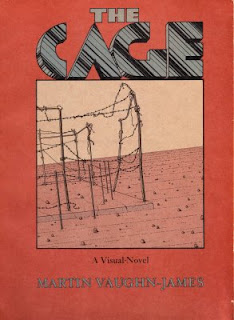 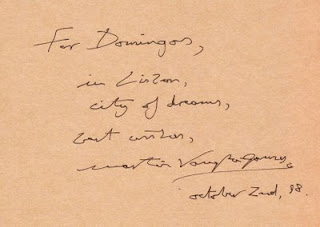 This is the stuff life is made of, I guess... I'm sometimes happy at The Crib for receiving a brilliant original page (like that Carlos Roume one, just the other day)... sometimes, like today, I'm very sad because another artist in my canon passed away. Tom Spurgeon at The Comics Reporter announced the passing of Martin Vaughn-James: http://www.comicsreporter.com/index.php/martin_vaughn_james_1943_2009/
This is a text that I wrote for the Summer, 2004, issue of Indy Magazine online (by the way: many thanks to Bill Kartalopoulos for being such a great editor at a time in which I had a bit of a writer's block): http://www.indyworld.com/indy/summer_2004/isabelinho_cage/
What can I say more, but thanks Martin?!... I'll never forget you!...

Images:
Martin Vaughn-James' The Cage's cover (Coach House Press, 1975; a little strip is missing at the bottom); Martin's inscription in my copy of The Cage: For Domingos, in Lisbon, city of dreams..
Posted by Isabelinho at 3:19 PM 2 comments: 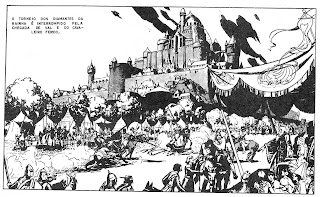 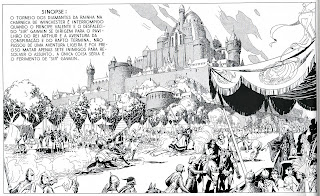 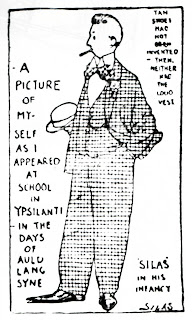 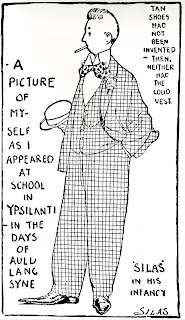 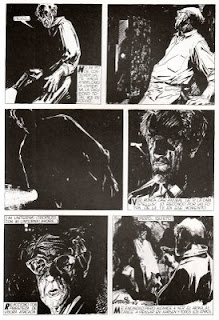 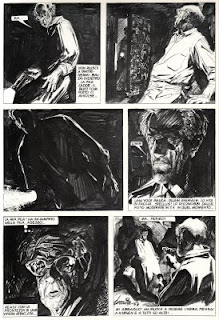 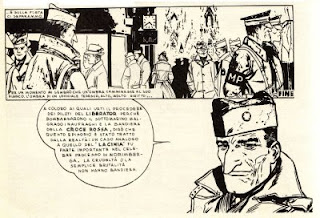 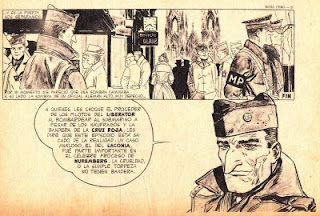 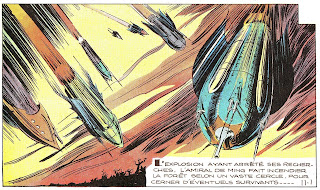 9.
Images:
1. a Prince Valiant (by Hal Foster) panel as published in a Portuguese edition (Príncipe Valente, volume 1, Editorial Presença [presence publishing house], 1972); what a mess!... (and, yes, in case you're wondering: the panel was published crooked as shown);
2. when I first saw my good friend Manuel Caldas' Príncipe Valente edition (Livros de Papel [paper books], 2005) I thought: I've been disrespected by publishers who were selling comics in about the same way as they very well could be selling potatoes (and they would sell rotten potatoes if people were dumb enough to buy them: are comics readers somewhat less bright than potato buyers?, I guess so...); if you like Hal Foster's art (or Warren Tufts') do yourself a favor and buy Manuel's editions in Spanish and Portuguese (http://www.manuelcaldas.com/) or in English (http://tinyurl.com/l8qcxr; http://tinyurl.com/l252ck: scroll down a bit, please...); these are labors of love; (only now, after all these years, did I notice that Hal Foster used aerial perspective in this spectacular image!, thanks Manel!);
3. a Winsor McCay self-portrait as published in Winsor McCay Early Works Volume VIII (Checker Books, 2006); nothing excuses such bad resolution and such bad design and production values!;
4. the same drawing as published in John Canemaker's Winsor McCay His life and Art (Abbeville Press, 1987); it's not Manuel Caldas repro quality, but, at least, it's a decent one;
5. this is a messy edition of Héctor Germán Oesterherld's and Alberto Breccia's Mort Cinder (Colihue, 1997); the repro quality is not the only problem: notice how a balloon content mysteriously disappeared in panel four;
6. the same page as in # 5. above as published in the excellent Italian edition: Mort Cinder, Sacrificio alla luna, L. F. Bona Editori, 1977; the repro is so good that it maintains an original art feel;
7. the last panel of an absolute comics masterpiece: "Un tenente tedesco" [A German Lieutenant] by Héctor Germán Oesterheld and Hugo Pratt (Mondadori, 1976 - one of two pirate editions; the other one was by Ivaldi); not only was the panel published crooked as shown, it also lost almost all the washes (the lines aren't that greatly reproduced either);
8. the same panel as originally published in Hora Cero (monthly) # 3 (July, 1957); no comments needed... (the original title of the story is "Un teniente alemán..."; as an aside: I can't understand why the Laconia became the Lacinia either?, it's not even a case of laconism...);
9. people blame technology sometimes (or the lack of it) for bad repro, but how can a body explain this superlative color edition of Flash Gordon done back in 1980!?, Flash Gordon, Le peuple de la mer (Slatkine B. D.); the only thing that I know is that the book was printed in Switzerland; if anyone can give me more details I will be much obliged...
Posted by Isabelinho at 5:21 AM 11 comments: