Those Crappy Reprints - Belated Coda or Who's The Author?

Who's the author of a comic? It depends, it may go from one person to several... Let's see, there's: the plotter, the scripter, the penciller, the inker, the letterer, the colorist, not to mention the editor, the art director, and, maybe, a couple more I'm forgetting...

Let's look at the below page again:

The authors are Earl Duvall, Al Taliaferro, and a few more people we know nothing about. Why is that? Because those who wrote about these things over the years were completely obtuse. They used mule blinkers to see the drawings and only the drawings. No one else mattered. They were color blind too because, over the years, they couldn't care less for colorists.

Any reprint that doesn't respect the work of all involved (and I mean, ALL people) is a fake in my book. 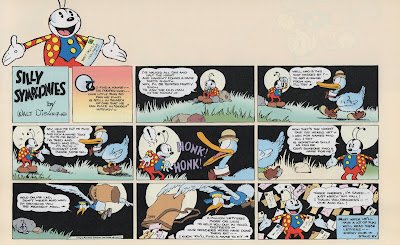 In the above reprint the colors were completely changed. The work of one of the authors was erased creating a fake page. Was Summer Hinton active in 1932? Even if she was, did she work on this page? Even if she worked on this page, did she color it as we see above in the newspaper repro? Obviously not.

Posted by Isabelinho at 7:44 AM No comments: 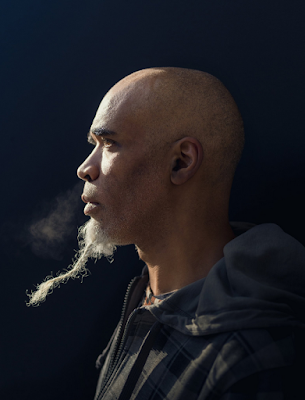 The real canon of comics emerges here and there, that's true, but the false canon prevails and, considering the barbaric times in which we are living now, it will continue doing so, at least during my life time.
Posted by Isabelinho at 6:32 AM No comments:

Here's what Frédéric Pajak says at the end of his Intro to the Oeuvres 1 book (my translation):


It's true that Buzzelli wasn't recognized enough as an artist and it's true that he is a bit forgotten. With the exception of some small printrun examples, over the last thirty years his work hasn't been republished. How could we have endured all this time in the ignorance of this lucid, funnily exasperated, visionary spirit?

Well, the explanation is quite simple: comics readers have been idiots. Once I hoped they stopped being so, but all hope is gone now.
Posted by Isabelinho at 7:50 PM No comments:

I promised perfection, and here it is: 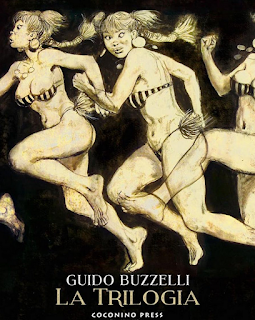 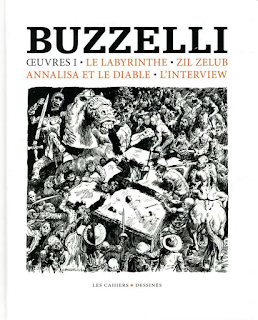 If I still had it in me to search this blog I could quote myself ranting against comics publishers a lot. What I said the last almost ten years of this blog's life could hardly give a worst idea of the species at hand. From subverting every aspect of comics in reprints (layout and colors especially) to poor production values, everything publishers did was, and is, disrespectful to readers.

That's exactly why I want to call your attention to the two reprints above, one Italian, one French. The pages were magnificently reproduced from the original art and the paper is top-notch (matte instead of garish; beige even in the Coconino Press book). All the extra-diegetical material is also great, from the covers you see above to intros and documents about the author (in the Les Cahiers Dessinés edition especially).

So, anyway, as I said, perfection exists, believe it or not. A huge thanks to Igort and Fréderic Pajak. Not to mention that absolute genius of comics, Guido himself!...

Posted by Isabelinho at 4:43 PM No comments:

I'm always amazed by how great the color in old American newspaper comics sections is.

IDW is reprinting these gorgeous looking pages. They look so good the only thing they did was to publish a slightly (where needed) retouched version, right?

Look at how dull and flat and boring the recoloring is if we compare it to the above page!

Perfection is out there. I happen to know it is. I'll show it to you soon.
Posted by Isabelinho at 8:57 AM No comments: