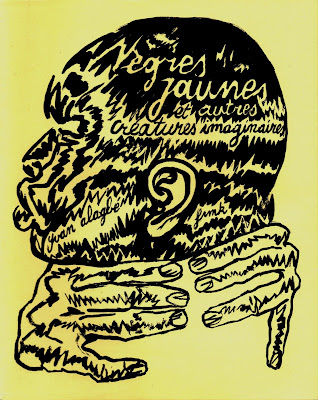 You can read here (in French) a very important interview by Du9's Xavier Guilbert with two of the FRMK publishing house most important pillars: Amok's Yvan Alagbé and Fréon's Thierry van Hasselt. The FRMK or the Frémok is the result of the merging of two previous artists co-ops (no publisher would ever dare to publish what they publish because comics publishers are mercenaries), the aforementioned Fréon and Amok.

The main reason why I find this interview very important is because it touches in a couple of points that are crucial to explain why comics are not an art form among all the others. Namely the reason why comics lack intelligent readers and what are the limits of what we may call comics or not.

One of the obvious reasons why this art form is what it is in the public's view is because comics lack a critical voice in the media. In spite of what you may hear from more optimistic folks this continues to be true. Either those optimists are just that, optimists, or they lack critical standards. I said it before on this blog: let's take the city where the FRMK is based: Brussels. I know that even a city like London, for instance, is Disneyfied to cater to tourists (dumbing down, anyone?). Brussels is no exception except that Disneyland is not the inspiration. They use the Belgian history of children's commercial comics underlining the idea that comics are just meant for an idiotic consumption and not, like literature or painting, capable of serious work exploring adult themes. Whenever comics critics celebrate the new Astérix book (this one is French, I know...) a new nail is sealing this art form's coffin.
Posted by Isabelinho at 5:37 PM No comments: 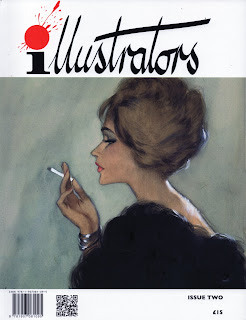 
So, what's wrong with newspaper comics, you may ask? It's a commercial medium that must both entertain and sell paper(s). In spite of their straitjackets some great comic strip artists did remarkable work once in a blue moon, I'm not denying that, but from the moment that 99 % of what they did isn't that good they're overrated in The Crib's book.
"Matt Marriott" by James Edgar and Tony Weare excepted, of course, but "Matt Marriott" and "Carol Day" are Brit realistic newspaper series. And those are a different animal altogether. It's a shame that no one ever noticed the difference.

● An absence of easy answers and happy, tidy endings

● Minor touches that add a great deal to the texture of the strip, for example the surprisingly blunt observations of characters about each other, particularly Carol. Another example is Wright's habit of casting people from his family and daily life or the movies as characters for example his son Nicky as Ian Carr in 'Ebb-Tide', and Burl Ives in 'Caribbean Captives'.

● The universe of 'Carol Day' is not a benign one. Most situations don't resolve happily for everyone or even most people. Carol doesn't smile and laugh a lot-in fact it's so rare that when you encounter an episode in which Carol expresses joy it immediately stands out. Most characters have serious psychological problems and dysfunctional families. Difficult relationships between siblings are the norm. Treachery abounds. Jealousy, greed and self-interest drive many situations. In short Carol Day doesn't live in a neat and tidy soap opera bubble where problems get worked out, relationships get back on track, the evil get punished and the good rewarded.


The somewhat dark universe of 'Carol Day' stands in stark contrast to the major American strips of the time, such as Leonard Starr's 'On Stage', Stan Drake's 'Heart of Juliet Jones', or John Prentice's 'Rip Kirby'.

It's official: I will only fully believe that comics publishers deserve my respect when a complete Carol Day collection sees the light of day (no pun intended).

The sad reality is that in any other art form "Carol Day" would be considered and admired as the master piece that it is. Not among comics readers, though, because they're still attached to children's comics such as The Fantastic Four or "Dan Dare" (to stay in the UK). If they present their laughable children's canon to "normal" readers instead of the truly great comics like "Carol Day" how can they support their mantra "comics are not just for kids anymore"? It's a small wonder that they can't, obviously.

A stunning bit of storytelling by David Wright, below: 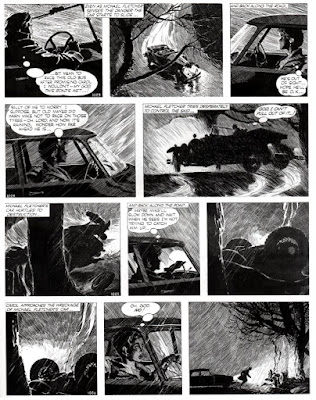 David Wright, "Carol Day: Where There's a Will," December 1959. Notice how Michael flows in the reading sense in the first panel in contrast to a worried Carol in the third panel and how that changes completely afterwards until disaster occurs. Michael is already off-balance at the beginning (the composition is tilted), but the left to right direction helps the slippery slope in the second panel. David Wright, like his friend Tony Weare, was a master of chiaroscuro (conveyed by hatching, cross-hatching, thick blacks, negative space and white paint). Here the ghastly weather at night is perfectly conveyed. Peter Richardson also calls our attention to: "Wright's sublime use of silent panels to add to the already oppressive atmosphere." (Illustrators # 2, "A Brush With Fitzrovia," 31.)
Posted by Isabelinho at 5:24 PM 2 comments: