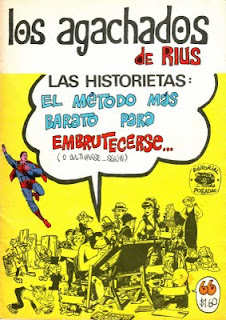 Eduardo del Rio (aka Rius) is a left wing Mexican political cartoonist who edited two comic book series: Los supermachos [the supermachos - one hundred issues: 1964 - 1967 - in Spanish: http://supermachos.toliro.com/] and Los agachados [the stooped ones - two hundred and ninety two issues: 1968 - 1977: Bob Agnew's translation, here: http://tinyurl.com/p2dsh8 (I also saw this title translated as "the underdogs")].
"Las historietas: El método más barato para embrutecerse... (o cultivarse... según...)" [comics: the cheapest way to stultify oneself... (or to cultivate oneself... it depends...) - my translation] is issue # 66 of Rius' Los agachados. It was published on april, 4, 1971, by Editorial Posada. In the first page of the comic book Rius wrote: "Historieta hecha por la tribú Rius © 1969." This suggests that Rius wasn't the only person involved in the creation of this essay in comics form.
Cultural studies is a discipline that started in England by the hand of Richard Hoggart during the fifties. Even if it mostly relies on almost the opposite view now (mainly because of theories developed around Bowling Green University in the United States), Hoggart "lament[ed] the loss of an authentic popular culture and [...] denounc[ed] the imposition of mass culture by the culture industries." (As we can read in his wiki entry: http://en.wikipedia.org/wiki/Richard_Hoggart). The previous decade Dwight MacDonald expressed the same ideas in his mag Politics (there's also the Frankfurt School, Max Horkheimer and Theodor Adorno: http://tinyurl.com/oqxtqk). Rius follows these views, but he was a comics artist so, he has to see some good in comics too (ditto Umberto Eco, more or less around the same time). What he denounces are the violence and stupidity of some comics made in U.S.A. (superhero comics, mainly; in France he denounces the cheap use of sexploitation), the greediness of publishers and the stupidity of the audiences: "Mientras peor es la pelicula. Más larga es la cola..." (the worst the film is, the longer the line to attend it - my translation).
Anne Rubenstein's Bad language, naked ladies, and other threats to the nation [about Mexican comics]: http://tinyurl.com/qb4ft8
Image:
Los Agachados # 66 (cover, April, 4, 1971). Alley Oop, a caveman (!), is at the helm of the comics ship.
PS The Crib is on a hiatus, but I hope to return to work in September (in almost a year I did only half of what I intend to do with it).
Posted by Isabelinho at 12:54 AM 3 comments: