Death As a Character


"Why do you always kill them all?
Because of that character no one really takes advantage of, which is death."

This Blog is dangerously becoming monographic, but a Blog is a log, after all, and I write about what interests me at any particular moment. The day my focus turns elsewhere my posts will change accordingly, of course... That said I feel more and more that, maybe, I should be writing in Spanish because Oesterheld's work will never be published in any English speaking country. I don't do it in the hope that many (yeah, right!) readers talking many languages (Spanish included) understand our modern (and post-modern) Latin.

The fact that no English speaking country will ever publish Oesterheld's work is yet another symptom that comics are not an art form like all the others. Even in today's Barbarian times it's a bit unthinkable (but is it, really?) that an English speaking country wouldn't publish Kafka or Proust. Worst than that though: excluding El Eternauta [the Eternaut], for political, more than aesthetic reasons, Oesterheld's work isn't even published (reprinted) in Argentina (Where's Randall, where's Sgt. Kirk, where's Bull Rockett, where's the complete Ernie Pike, Amapola Negra, Ticonderoga, Mort Cinder, 'Loco' Sexton in a restored fac-simile edition with good production values?)

Anyway... I started this post quoting Oesterheld himself talking about the death of his secondary characters and the death of his protagonists even (like Randall in the series "Randall, 'the Killer'"). In highly formulaic action stories the bad guys are always awful shooters while the hero kills twenty with a slug. Oesterheld couldn't go against that completely, of course, because he worked, after all, in a commercial context, but he could (and did) minimize the unconvincing parts of the formula. He used a few strategies to do that: the most important, because it has ethical consequences, was to avoid (again, not completely) Manicheism; another one explained his protagonist's victory with said protagonist's intelligence, rather than violent inclinations; the death of the good guys was another one (in a war no one is safe). His masterpiece, according to strategies one and three (it's not even a pop story, in my humble opinion) is "Amapola Negra - 'Black Poppy'." But "Amapola Negra" and "Ernie Pike" were published in Oesterheld's own Editorial Frontera (and so was "Randall"), which meant that he had more freedom to do whatever he pleased...

I'm not talking about Editorial Frontera here, though. The examples that I show below (besides the great death of Randall) are part of Oesterheld's career outside of his publishing house: in Abril and Columba (early to mid 1950s and early to mid 1970s). 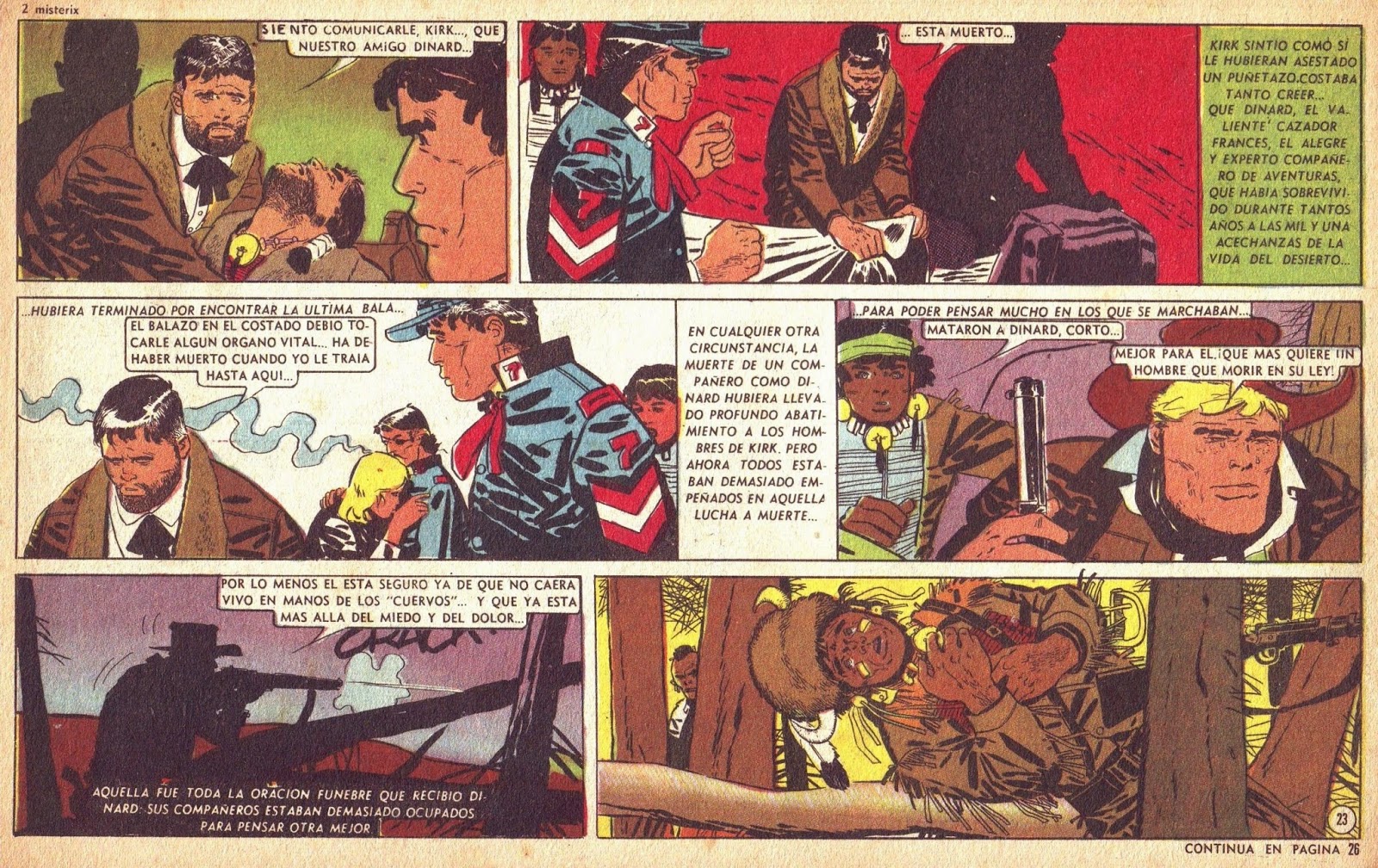 I'm not completely sure, but I think that Dinard's death above may very well be the first disappearance of a main character in Oesterheld's oeuvre. It's interesting how Corto (yes, exactly like in Corto Maltese) deflates the drama. A fight was going on and they didn't have the time to stop and mourn. Here's what Corto said after Maha gave him the news of Dinard's death: "Good for him. What can a man want more than to die as he lived?" 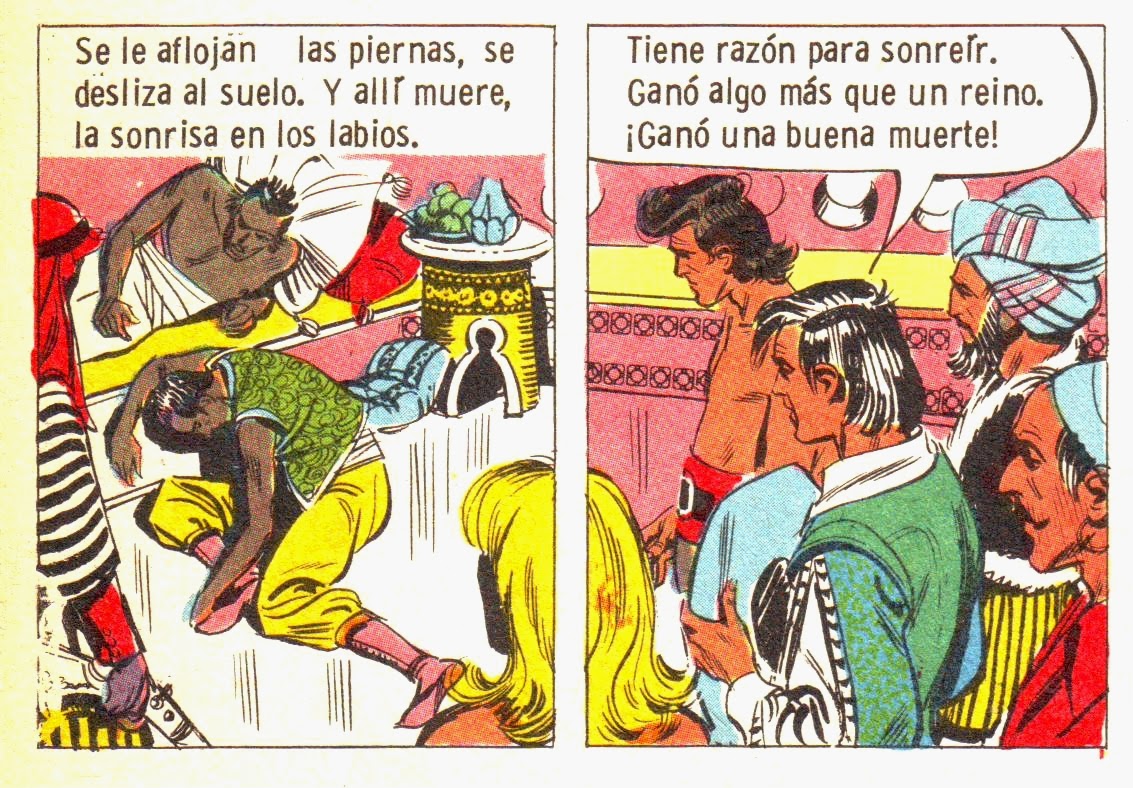 Columba was a traditional highly commercial publishing house. Oesterheld ended up working there because he needed to put bread on the table. However, he was such a towering figure (the writer of El Eternauta, no less) that his editors and publishers gave him some creative autonomy. That's why he could kill off some of the characters, as seen above.

Below, the poetic death of Randall... 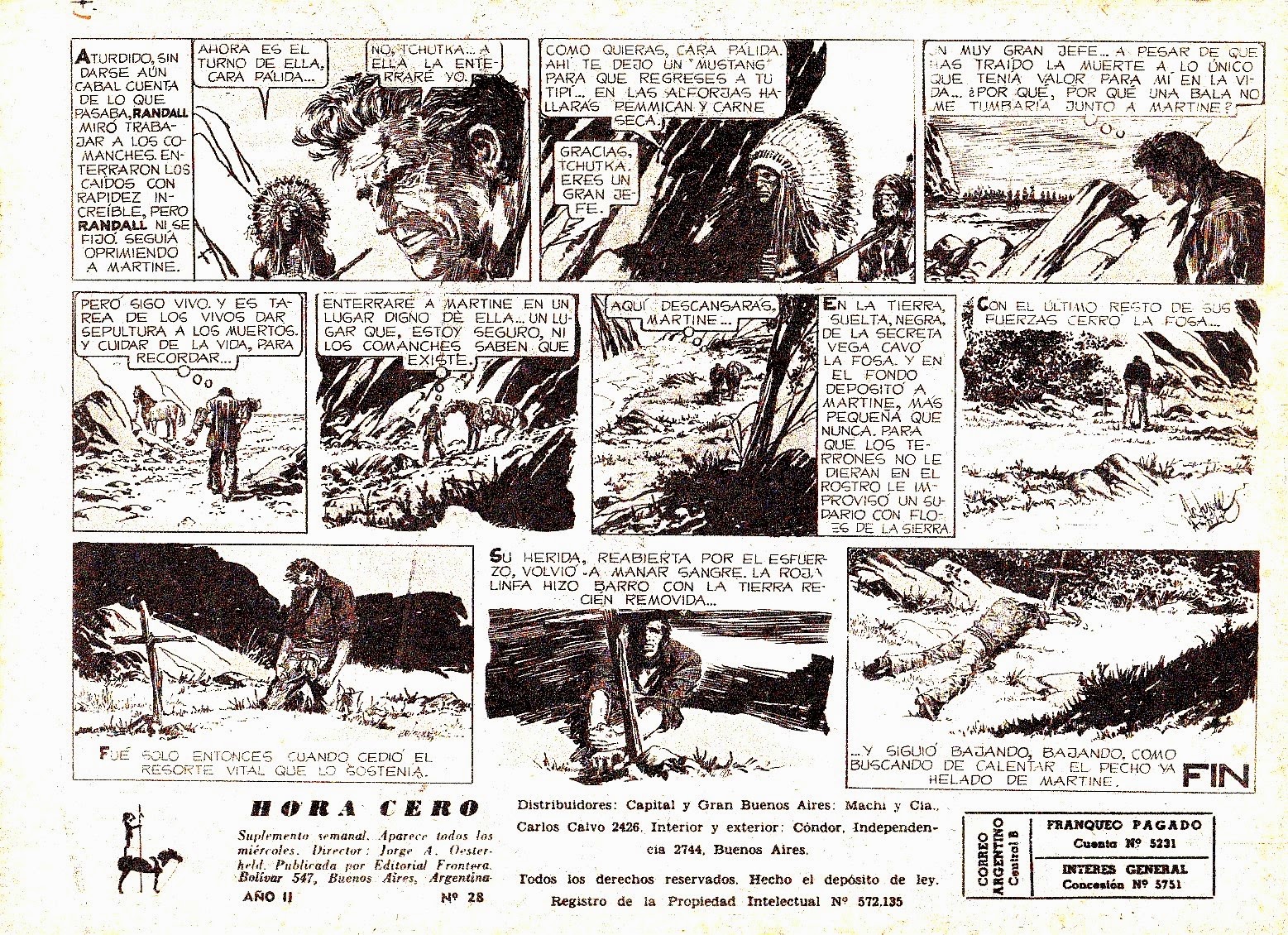 Héctor Germán Oesterheld (w), Arturo del Castillo (a), I don't know who the letterer was, "Randall, 'the Killer': Jinetes vengadortes" [vengeful riders], Editorial Frontera, Hora Cero Suplemento Semanal # 28, December 3, 1958. Here's what's in the captions in the three last panels: "It was then that the vital spring that tied him to life yielded. / Because of his efforts blood spurted from his reopened wound. The red lymph mixed with the recently stirred dirt... / ...and continued to run down, as if seeking to warm up the already freezing bosom of Martine." 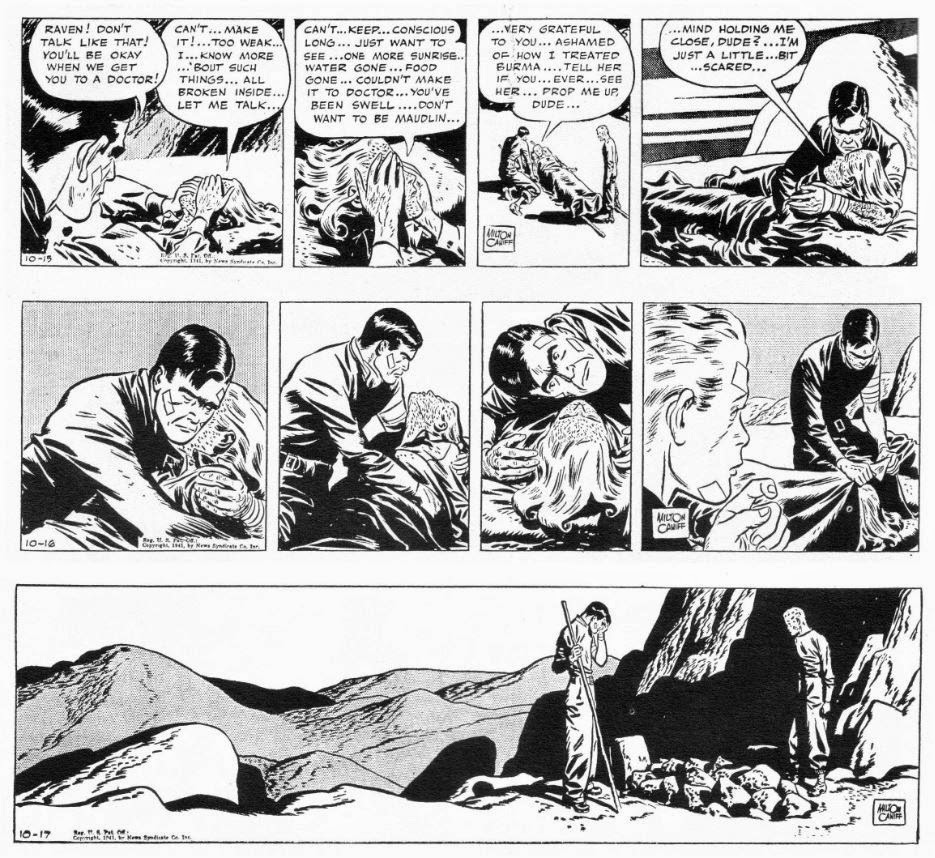 Readers reacted strongly against the death of both Randall and Raven Sherman. So much so that Oesterheld had to resurrect his character and MIlton Caniff never repeated such a stunt again. "Terry and the Pirates" was a mediocre juvenile adventure strip during the 1930s. It improved a bit during WWII, but, besides some good qualities (Caniff's female characters, Burma and Hu Shee especially, and some interesting story arcs - the excellence of the art, and I mean technically, and the colorful language aren't even worth mentioning) it never surpassed, if I remember correctly, stereotyping (Connie is overtly racist) and Manichean formulas. He explained very well why he killed Raven though (it's reason number 3):

"Ever after that if somebody in the strip became ill or hurt or hit by a car or thrown off the back of a truck, the reader knew - well, Jesus, he killed off Raven Sherman, and now he's going to kill off this character. That's the real reason for doing it, to put credibility in there, instead of - oh, well, he'll get out of it somehow or come back to life or something. Soap opera stuff."

A Quick Note From Seth

In a private correspondence with Seth he pointed out that the stairs I mention below are two different sets of stairs because those are two different houses. I stand duly corrected.
Posted by Isabelinho at 4:52 PM No comments: 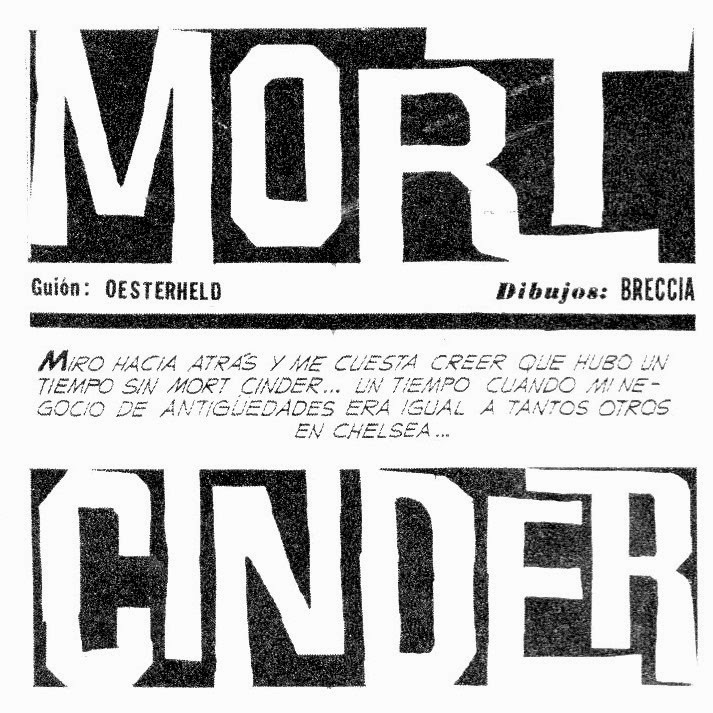 On Stagecoaches and Indian Attacks, Again! Can the Indians Attack a Stagecoach Successfully In a Sea of Eurocentric Mass Media Formulaic Products?...

...They can, at the hands of a truly great writer like James Edgar. If the result of the attack was drawn by a truly great artist like Tony Weare, it's the icing on top of the cake! 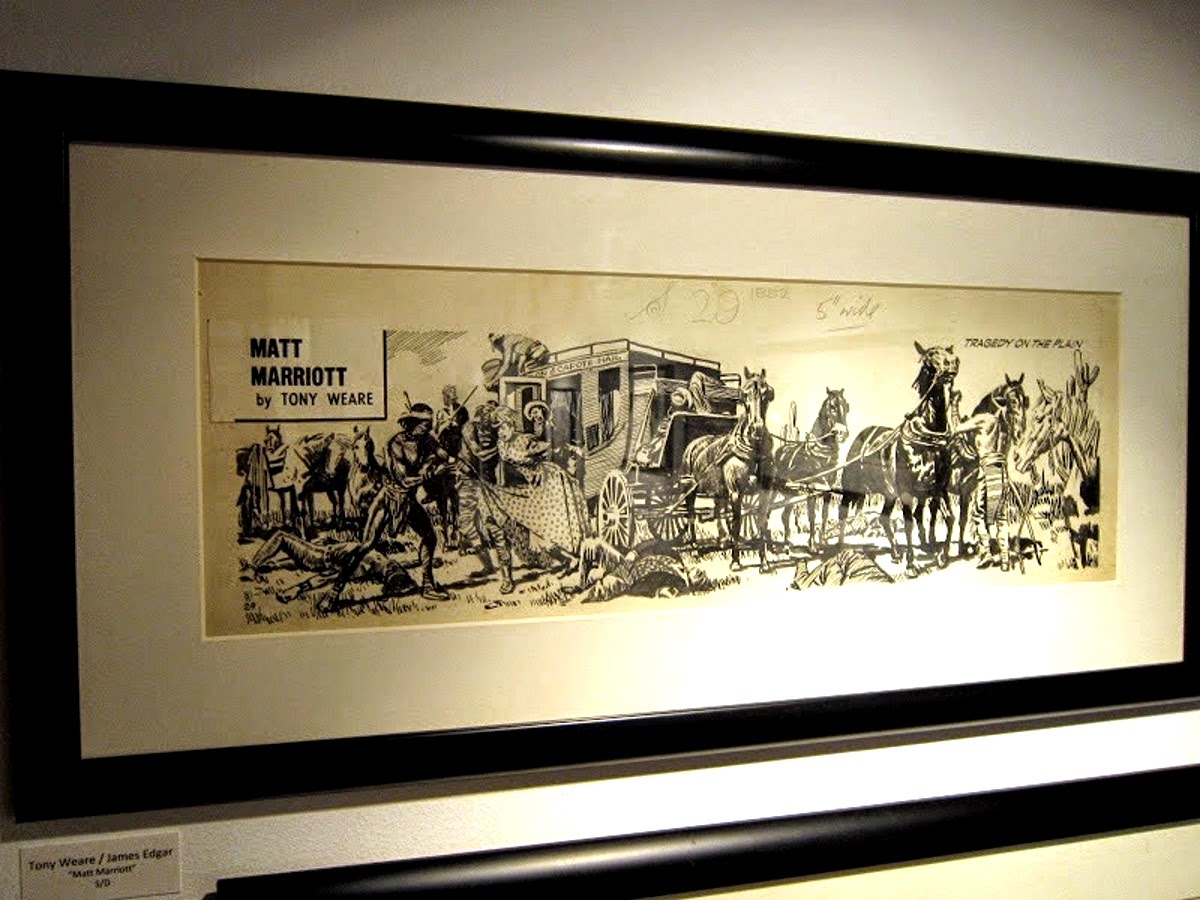 A repro made in Italy (why did they change the caption place, though?...), Matt Marriott di Tony Weare [no need for the scriptwriter's name to appear, of course! Sigh!...], Edizioni Camillo Conti, November 1978.
Posted by Isabelinho at 2:51 AM No comments:

The least we can say is that John Ford was faithful to his movie sites. Monument Valley comes immediately to mind, of course, but what about Beale's Cut? 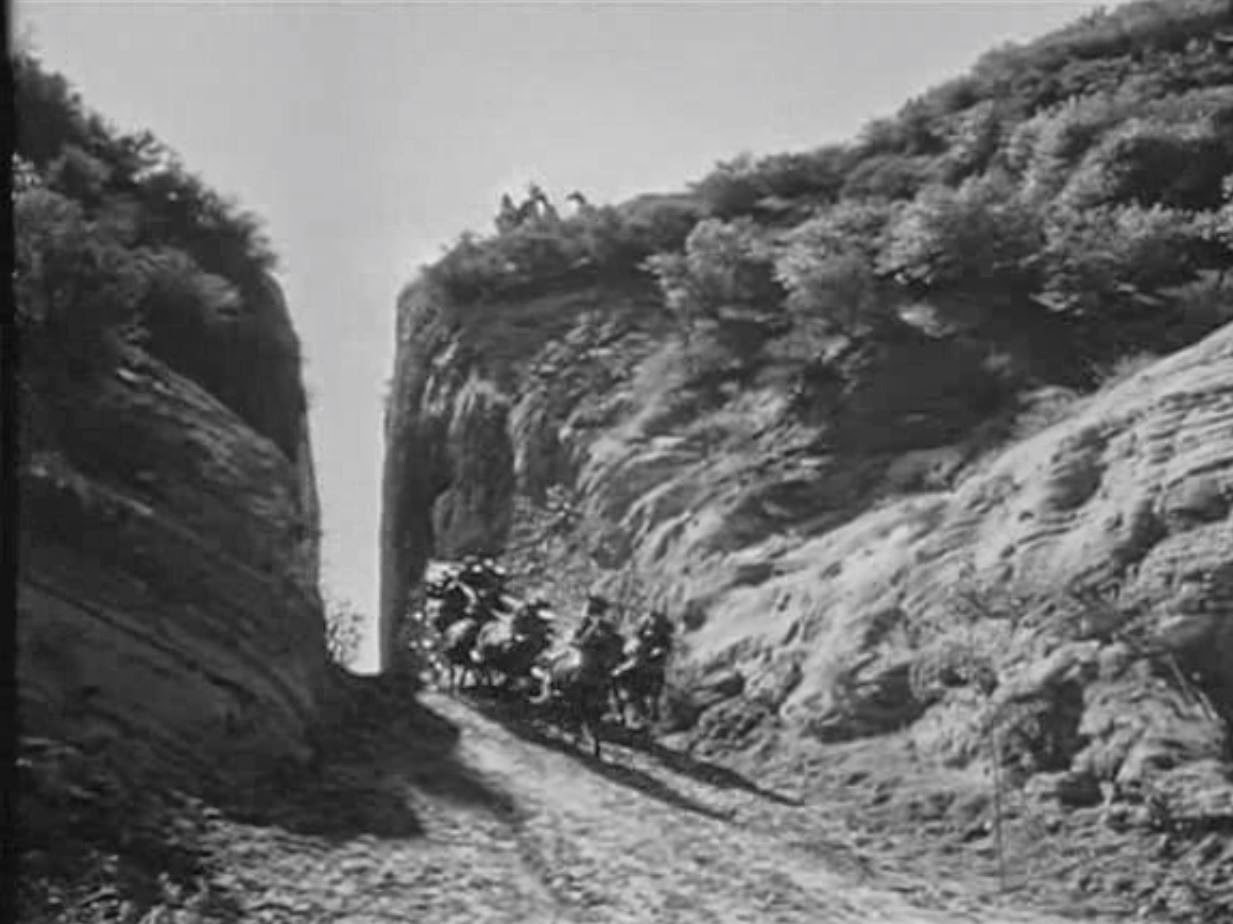 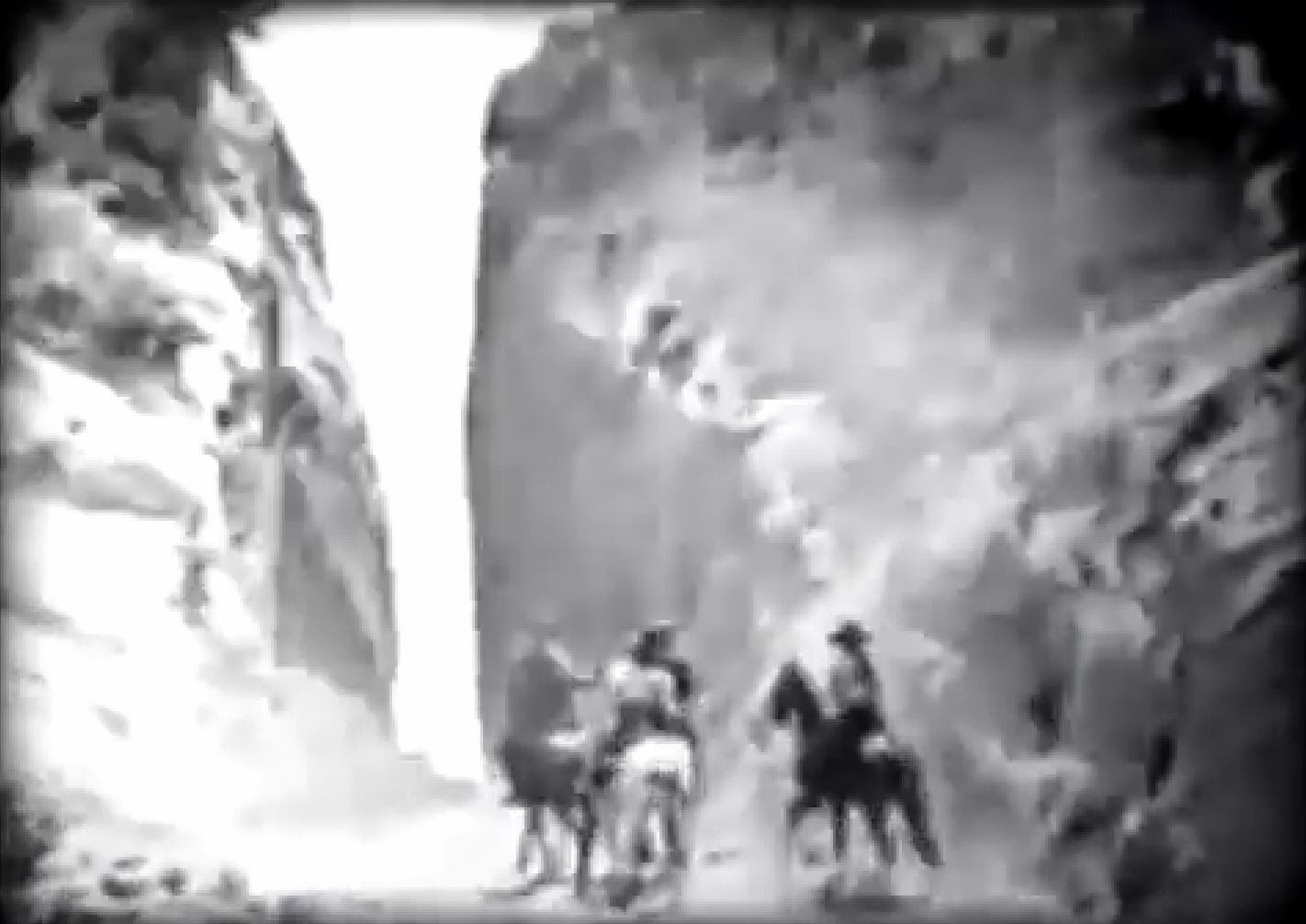 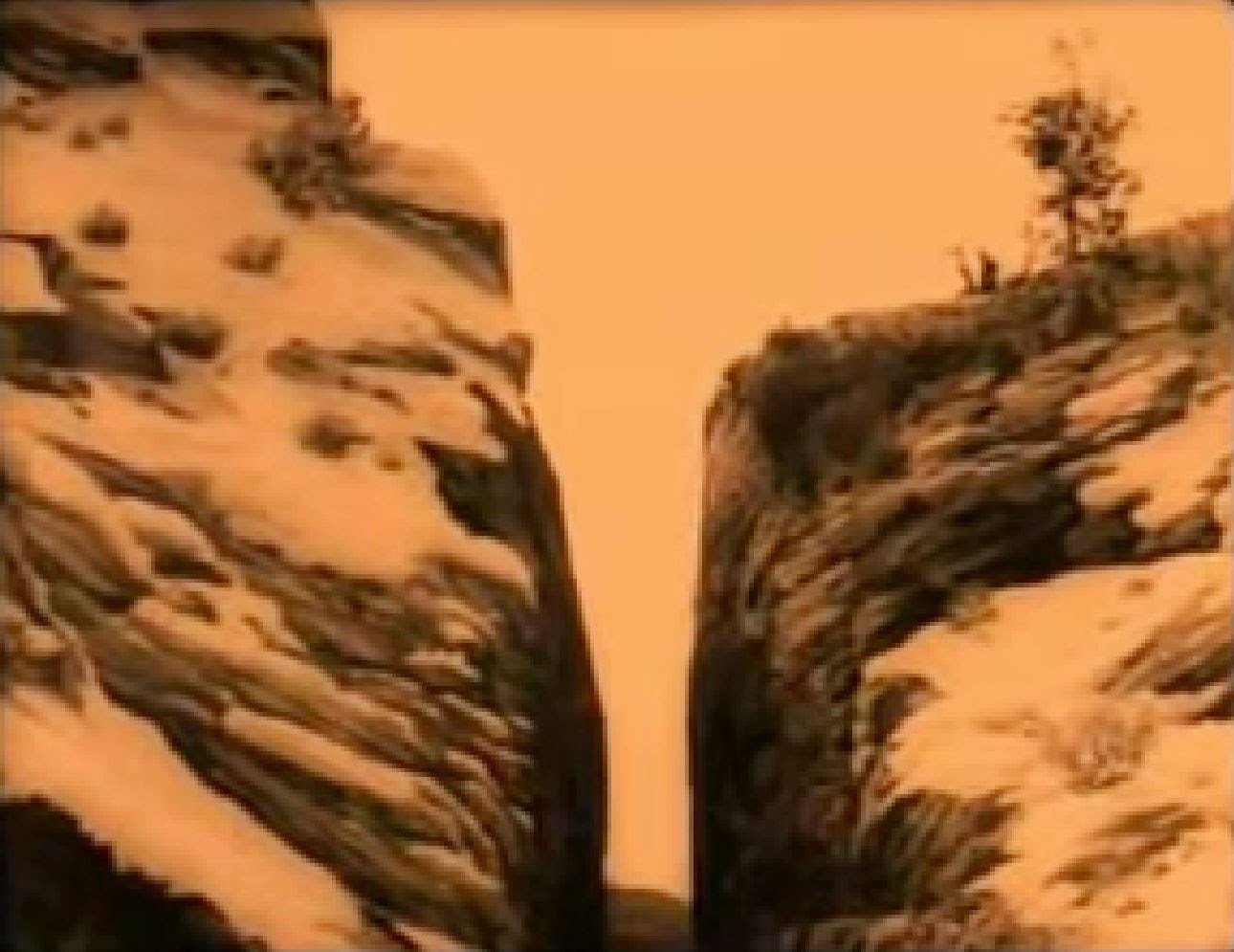 
Here's an interesting site about the Cut as a filming location.
Posted by Isabelinho at 2:32 AM No comments:

I continue to notice how John Ford's films influenced Héctor Germán Oesterheld's scripts for some of "Sgt. Kirk"'s sequences. A rhetorical question comes to my mind, though: was it possible, in 1953, to avoid John Ford's influence when depicting Indians attacking a stagecoach? It was, at least if we are talking about different media like film and comics. In this post I will compare Hugo Pratt's panels with frames from Stagecoach, but, first, let's compare Pratt with Pratt: 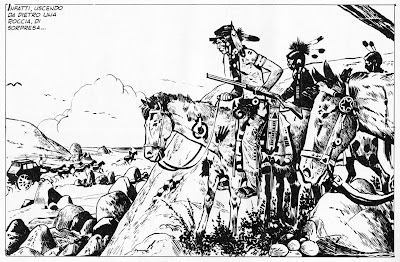 
As you can see the 1967 version is a lot more cramped than the 1953 one (somehow the stagecoach travels faster in the first example: the rocks and the panel border on the left squeeze it in the second version). The tree on the right side of the panel helps to underline what Oesterheld wrote on the caption (once again, said caption was completely destroyed by Pratt in his Sgt. Kirk version):

As a matter of fact, appearing as if from inside a surprise box...

On the other hand in John Ford's sequence the entrance of the Apaches isn't half as spectacular (see below): 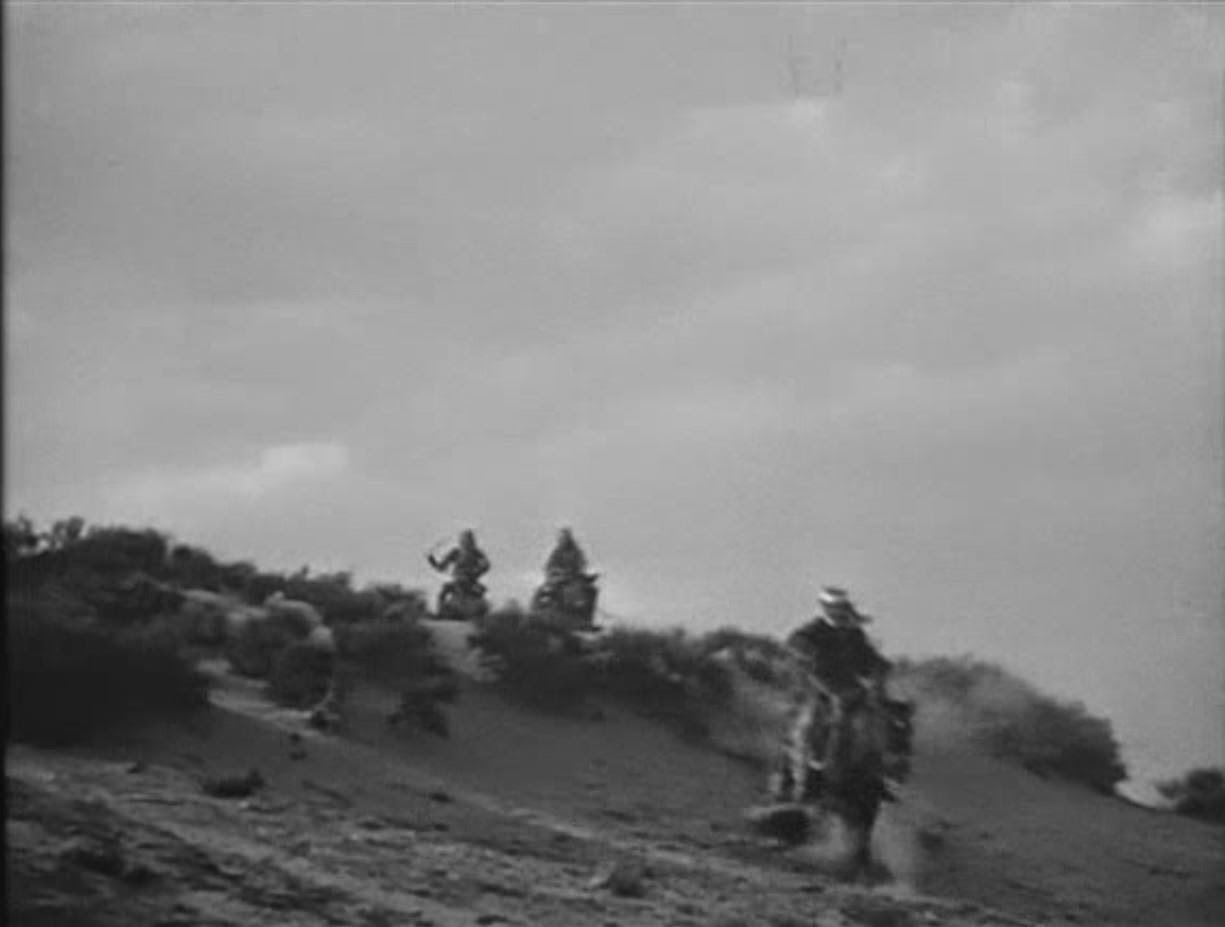 Hugo Pratt drew a couple more spectacular images of the chase (see below): 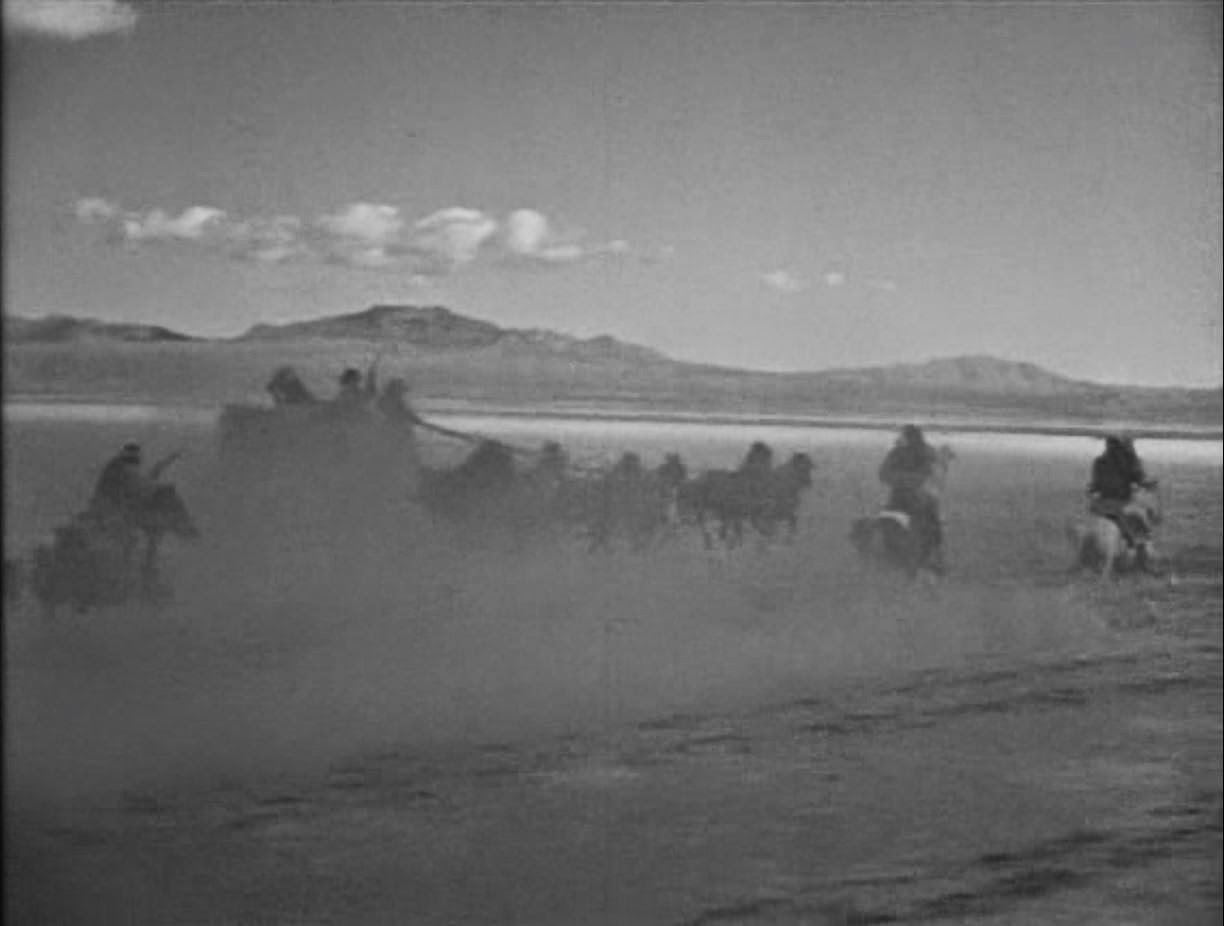 As we can see in the film frame above, the image loses readability because of the dust. John Ford chose a flat, but dusty land to film. Not being (much, anyway) constrained by the laws of physics, Pratt didn't eliminate dust, but he controlled it as he pleased...
To avoid the dust John Ford also filmed with the camera shooting ahead of the stagecoach: 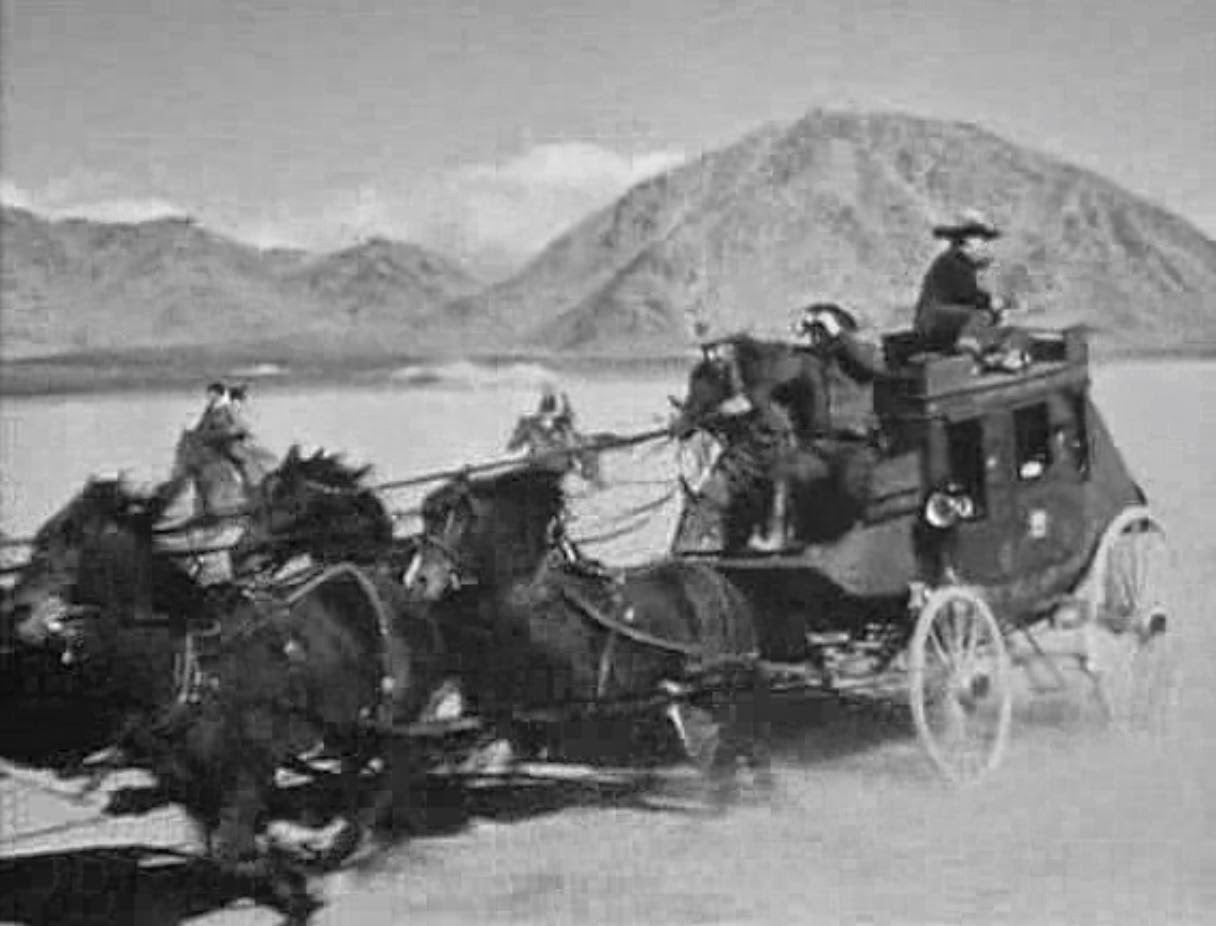 In both the film and the comic, Indians fall: 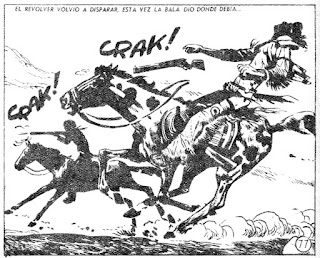 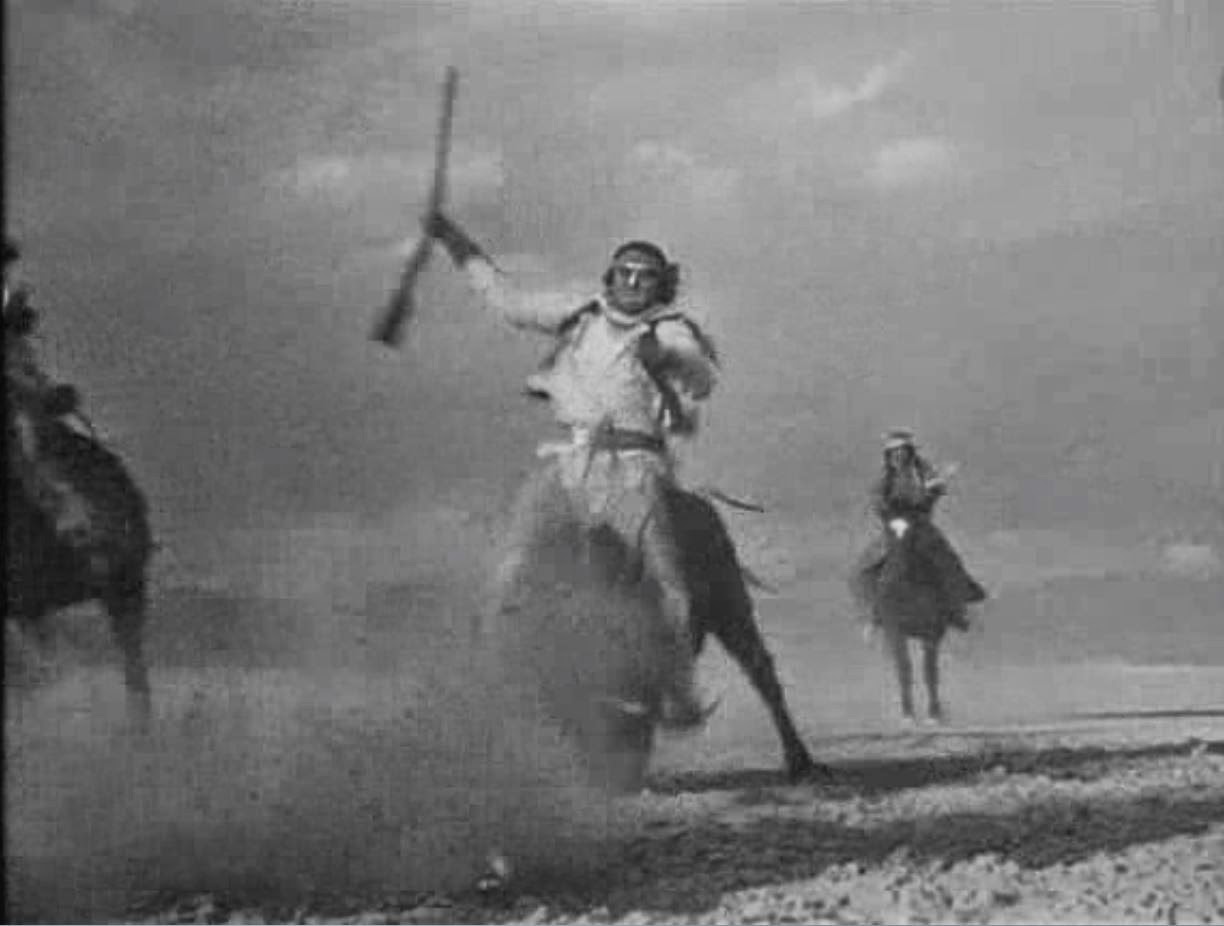 In the two examples above there's a subtle difference though: the profile shot is neutral (even if we know that the plot is on the deffenders' side); the front shot below puts the viewers on the stagecoach travellers' place (the Apaches are unequivocally, "the other threatening us").

Maybe the most famous shot in this Stagecoach sequence is the extreme low angle in which the camera was put in a hole (see below): 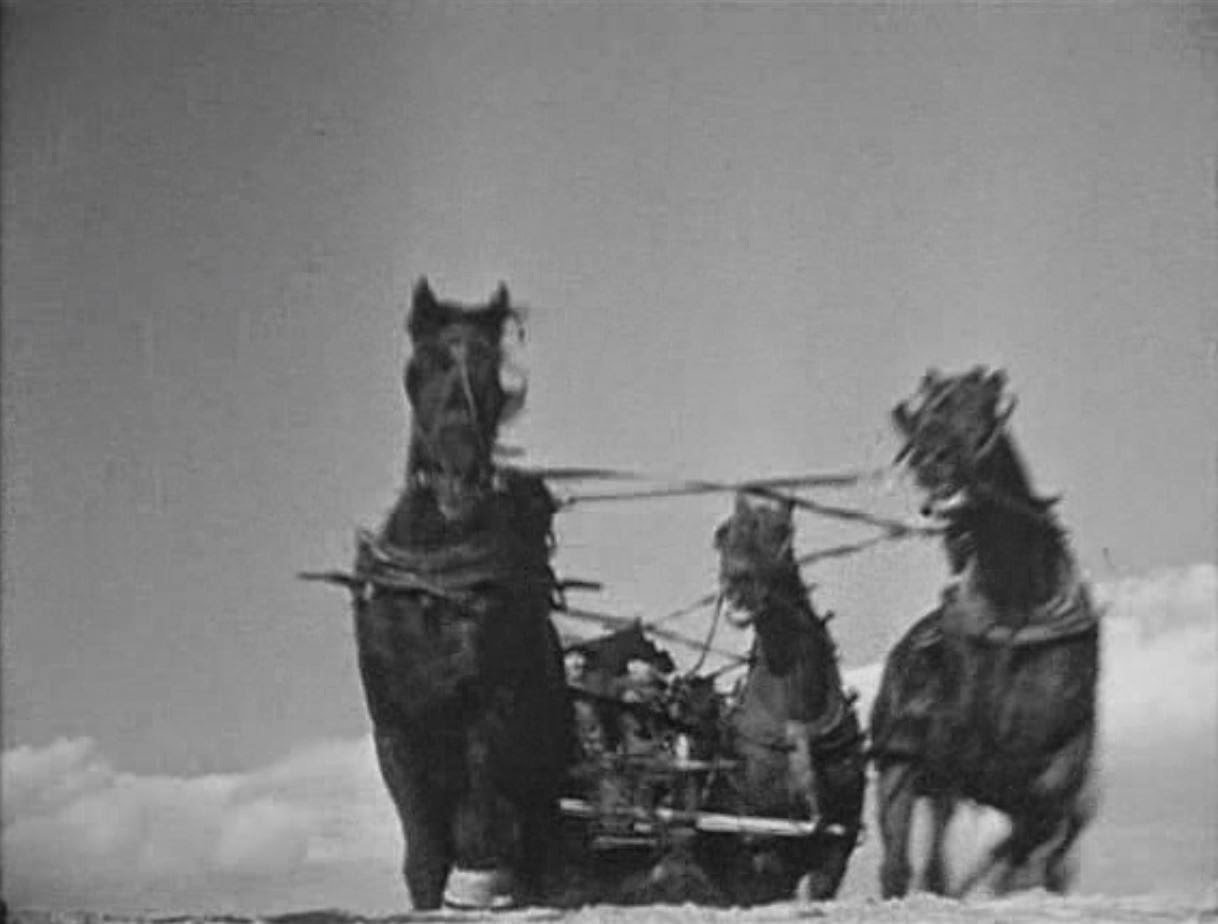 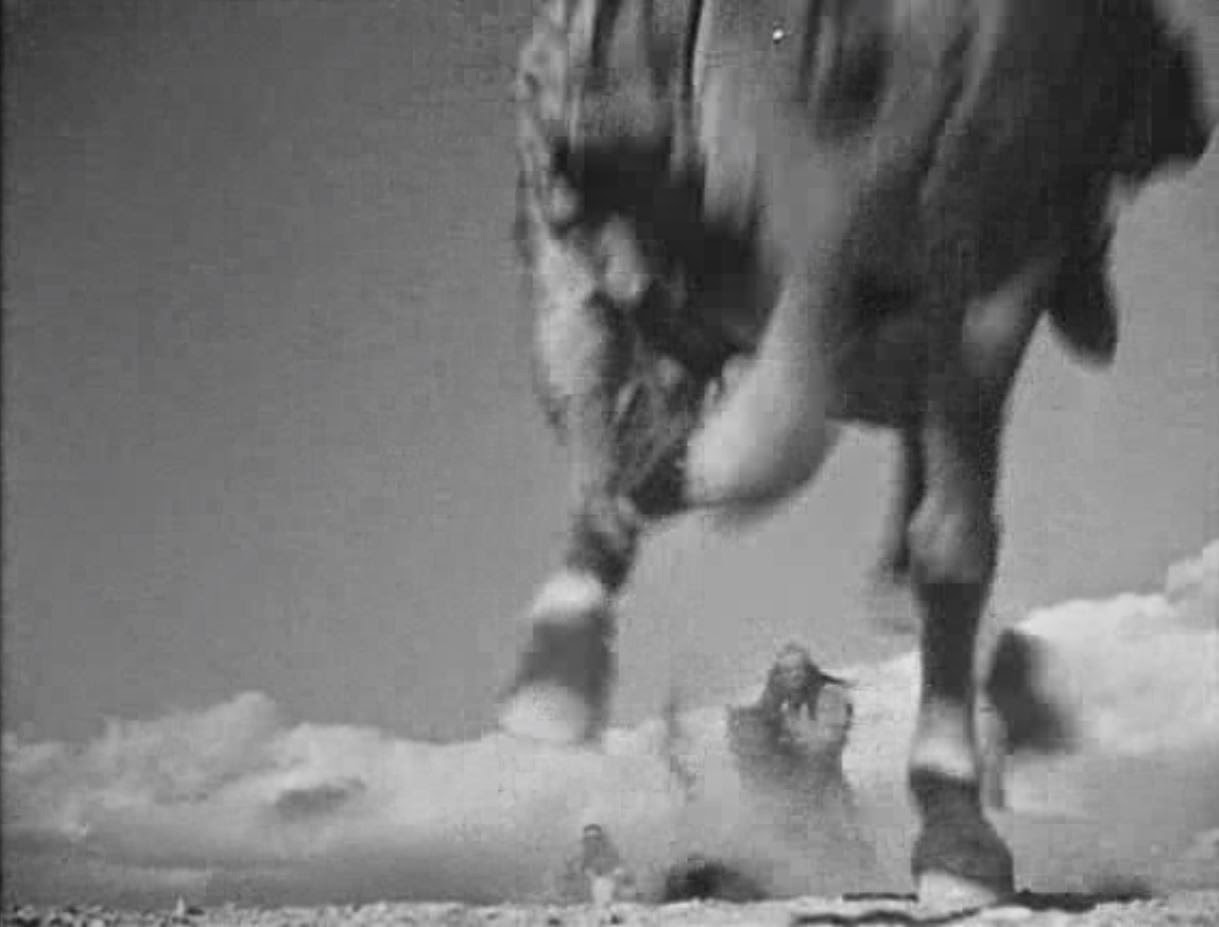 Someone should explain this to me though: the Indians don't shoot one of the horses pulling the stagecoach why exactly? It would effectively and easily stop it in a complete disaster. I don't know who said that in a bad story everybody is stupid (Peter David?).

Posted by Isabelinho at 5:52 PM No comments: