I decided to rip-off Álvaro Pons and write in the next weeks about my 25 favorite comics. After criticizing the comics canon (and make no mistake, that is the comics canon, or, at least, a comics canon that is highly influenced by the United States; I can only imagine a French-Belgian influenced comics canon with Hergé and Bilal and Moebius, etc... still more trash, of course...).  Anyway, I would love to promise one text per week, but I'm far from being sure that I will do that. The texts will vary in length according to my inspiration of the moment.

Finally, let you be warned that I will cheat. A lot! By cheating I mean that I'll choose one page, or one book by an artist, but I will not let myself be confined to just one item. If relevant I'll write about more than one item or more that one artist or author. Also, I'm not an expert on everything so, please excuse me in advance for any mistake or any underdeveloped theme.

What's wrong with comics criticism? Everything!

Remember when I said that a comics critic doesn't need an aesthetic education to write about comics? Lo and behold, here is a journalist saying that Álvaro Pons is a teacher of Optics and part of the Physics Faculty. Imagine someone without an aesthetic education wanting to write about the visual arts or someone without a degree in English (or other languages in whatever countries) wanting to be Lit Crits. They would be immediately laughed out of the room. Maybe that's the real reason why the comics canon is laughable as we have seen these last few days (it's either that or comics crits are the low of the lowest in crit skills). It's time to rest my case though. Besides, this art form is doomed anyway...
Posted by Isabelinho at 1:46 PM 9 comments:

While I was at the link below (the blog of a Summer Comics course, by the way; look at the ridiculous banner: 'nuff said!) I looked around and spotted their syllabus. It is what it is, the usual mainstream and American centric monstrosity. I'm not going to say much more about it. Except (look below)...

Where is the greatest comics artist of all time, Yoshiharu Tsuge? Where is Garo?

Moreover, where are Argentinian and Italian comics, besides the mediocre Corto Maltese, that is?

This can't be just love of the mainstream and hate of everything alternative. This is ignorance, pure and simple ignorance.
Posted by Isabelinho at 1:31 AM 1 comment:

Sorry, but I'm losing patience so I'll skip translation this time. As I put it before only fanboys write these lists. That's why I would love to read at least one written by someone normal. For once...

PS  As usual there are a few exceptions above: Alack Sinner, Maus, From Hell. Followed by a few more that, at least, aren't completely ridiculous: Krazy Kat, Mort Cinder, Philemon, Watchmen. But, that's it...


Posted by Isabelinho at 5:06 PM No comments:

Yet Another Ridiculous List - I Give Up, I Guess!...

Imagine yourself being a managing editor of a newspaper or a general interest magazine (if you are one you may leave your imagination alone). Imagine also that you want to publish an article about comics. Who do you invite to write it? A comics critic, obviously.,,

Is there such an animal though? There is, there is, but... Where do these animals come from? Where is their habitat? In what pastures do they eat?

Through word of mouth our putative managing editor may find him/herself in front of the following "comics critic":

1) He, it's usually a he, read and liked comics since infancy.
2) He has no paying job related to the arts or literature or that branch of philosophy called aesthetics (curiously enough such trifle details as an aesthetic education is not deemed important to write about comics).
3) So, he may come from all walks of life, but what is his diet? Well, mainstream comics obviously.

And so, our vignette ends up here. If you don't read Spanish allow me to translate:15 essential comics to those who never opened a comic. The ridiculous list (two or three books excepted) is as follows:

This is one of the most ridiculous things that I had the misfortune of seeing, ever! I would understand such an inane list if the article's title was 15 essential comics for fanboys or 15 essential books to prevent laypersons from reading a comic ever again. But not this... in a national newspaper!

Another Spaniard says here something like: we, comics readers, stick to criteria marked by 11 year olds. How true!
Posted by Isabelinho at 11:59 AM 2 comments: 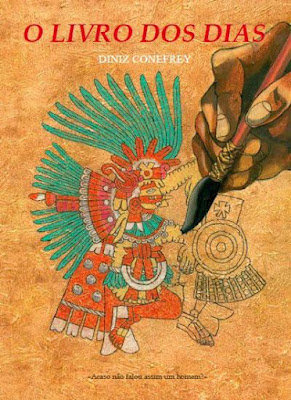 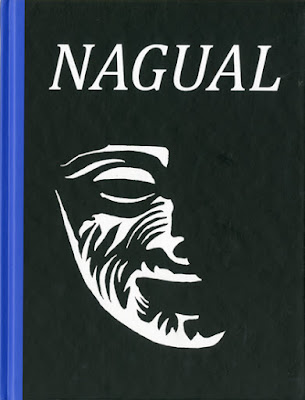 Posted by Isabelinho at 12:10 PM No comments:

BilBolBul, besides being a racist caricature (see below), was a comics con in Bologna, Italy. I received their newsletter with the news that it will change from a con to a project that will be active all year. But that's not why I'm writing this post. The real reason why I'm mentioning BilBolBul's newsletter is to quote it:

Exactly! If the comics public implies the lowest common denominator (as it unfortunately does, that's what explains the ridiculous canons) the industry may be healthy, but the art form is in big trouble. 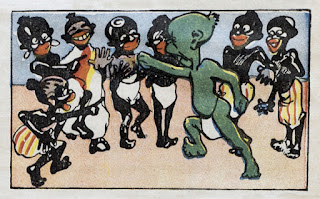 In my previous post I wrote, "being [the coloring] an allographic process, it all bogs down to personal taste," but there's an instance in which this isn't true. Imagine a colorist who wanted a certain effect and let clear indications to the separator that s/he wanted black to be printed before the primary colors. In that case printing the reverse would be a mistake that would result in a false comic. It's likely that the restorer has no access to the color guides, but if the separator was part of the original process too, shouldn't we follow the original printing order of the colors? Maybe not because, if we consider what happens in allographic art forms, like theater and music, the interpreter is free to interpret what's in script and score, but is such freedom allowed to the restorer? I don't think so, but, in any case, there are always instances in which, due to lack of information, restoring is interpreting.

Anyway, this post is about something a bit different. Below is a Sgt. Kirk page as it appears, tanning and all, in Misterix magazine + how I scan it... (as you know by now, I'm sure, the writer was Héctor Germán Oesterheld, the drawings are by Hugo Pratt, the colors are by Stefan Strocen).


It seems that, presto!, all problems are solved with a click of the mouse, but alas, nope, look closer (literally). 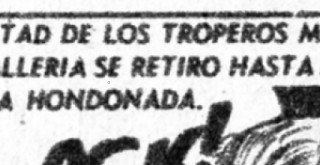 Everything is stained and the lettering is a mess. I gave up restoring the letters after awhile because there are thousands of letters. It was an impossible task. As for the white space I can always clear things a bit, but, then, some lines disappear. Below is a panel as it was published in Misterix (left) and the same panel as published in Sgt. Kirk (right).

The lines that aren't there are not the only problem. Look at how sttagering the difference in line quality is between these two images. Again: Misterix on the left. The panels are uncleaned this time.

The line quality may be mediocre, but if you can read Spanish, you'll notice how elegant the caption is. Compare it to the ugly utilitarian and redundant caption in Italian. Isn't it a crime against the Castillian language that one of its best writers was ignored being Sgt. Kirk translated (!) in Spain from the Italian? Imagine people in the UK having access to Shakespeare's plays only through, say, translations from French translations! Only in the comics milieu, with our pitiful comics publishers, is such a thing possible.
Printing quality in the color pages is better, but are those clean? Judge for yourselves below...