I continue to get rumors coming from the fantasyland that is the comics milieu saying that I'm too dogmatic. So, let me leave you with this tweet for the day: dogmatic is someone who doesn't agree with us.
Posted by Isabelinho at 11:57 AM 1 comment: 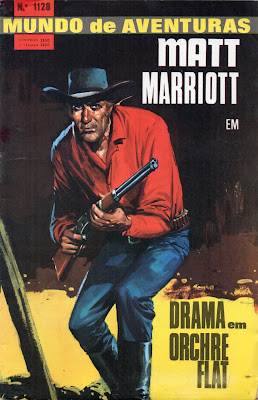 Nikai Andrews asked me: "How did you come across Matt Marriott anyway?"

A lot of the Matt Marriott story arcs were published in Portugal in a mag titled Mundo de Aventuras [a world of adventures]. The production values were as poor as poor can get: with pulp paper, layouts completely changed, drawings chopped up or expanded by some hack, ugly mech types, balloons all over the art, etc... Since I think that the series improved dramatically during the 1970s and production values in Mundo e Aventuras improved a lot, I was old enough to be impressed by such 1970s tales as "Mary A Pregadora" ("Gospel Mary") or "Uma Nota de Dez Dólares" ("A Ten Dollar Bill").

As you can see below the production values of the ADCCC (All Devon Comics Collectors Club) aren't stellar exactly (I would say that they are uneven, being the example at hand one of the worst). Even so, look at the strips above as a page in Mundo de Aventuras below. I don't even know where to start; I'll just say that the whole shebang is there and I don't need to repeat it. 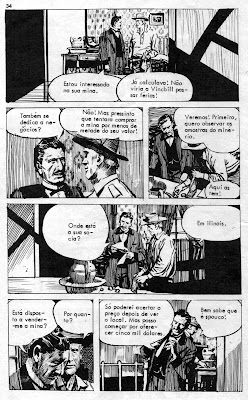 Those who read The Crib regularly know that I don't have a lot of respect for comics publishers and comics editors (small wonder, with examples like these), but it goes without saying that there are some exceptions like the great Héctor Germán Oesterheld (let's not forget that he was also a publisher; that's, of course, the only explanation to the question: how is it even possible that such stories were published back in the 1950s?). Chris Oliveros is another one, and let's not forget those guys at L'Association and Sins Entido and Frémok and Christian Humbert-Droz and Gary Groth and Kim Thompson (I miss you Kim!) and... and... I would not put those responsible for the second series of Mundo de Aventuras in the same league (far from it), but the fact is that they were responsible, during the 1970s, for three Matt Marriott comic books that respected the original material denying Mundo de Aventuras' terrible past (see below). 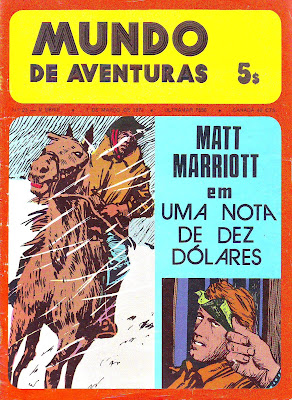 When I was in my teens I loved Matt Marriott (strangely enough I loved Tony Weare's style - I also loved the work of Eric Parker, by the way), but I couldn't realize what to me today seems painfully obvious: as good as Eric Parker's drawings are Buck Jones isn't Matt Marriott. It's the difference between a childish, manichean, racist, comic book and an adult, complex comic strip. It's as simple as that.
Posted by Isabelinho at 4:08 AM 7 comments:

This Art Form Deserves To Die

Advertising in the Previews Catalog for volume 27 (!) of the Modesty Blaise comic strip reprint collection by Titan Books, September 2015.

Imagine that all the world's museums (The National Gallery in London included) despised the work of Francisco de Goya or William Turner being full of mediocre crap instead. Imagine that publishers shunned the work of Marcel Proust or Virginia Woolf (that's... ahem... not that difficult to imagine because it's happening already). Imagine that the work of Ingmar Bergman or David Lean was completely ignored (again, that's... etc... etc...). You get my point.

Apart from the amateur publications of the ADCCC (All Devon Comics Collector's Club) no one else but Titan Books is reprinting British newspaper comic strips. And what does Titan publish, I hear you asking? Great newspaper comics series like Carol Day or Matt Marriott? Not at all! What Titan Books is publishing is crap like the one that you can see above.

Maybe they thought something like: "OK, enough mediocre pap! Let's do things right and publish all the seventy Matt Marriott story arcs." Unfortunately, no, they added crap to their already existing pile of crap as you can see below.

As I repeatedly said on this blog: this art form deserves to die! 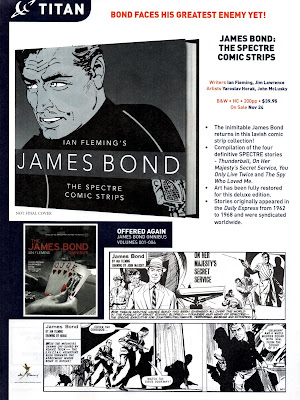