“The Territory” by James Edgar and Tony Weare

“Matt Marriott” is, with “Randall, The Killer” by Héctor Germán Oesterheld and Arturo del Castillo, the best Western in comics form. This may seem like damning with faint praise because the overall quality of comics Westerns is truly appalling (with the American ones in pamphlets and a newspaper comic strip like “The Cisco Kid” among the worst…). That’s far from being the truth though: both comics series include some of the greatest comics ever published. Unfortunately both share the same disdain from publishers and readers alike. “Randall” (published mainly in the Argentinean comic book Hora Cero Suplemento Semanal [zero hour weekly supplement], issues # 1 – 65: 1957/58, is long out of print; my attempt to bring it back to life failed because there’re problems among some copyright holders, or something…). So, in two words: no Randall. “Matt Marriott” is a British newspaper comic strip that ran in the [London] Evening News from 1955 until 1977. We know who the copyright holders are, but, in a similar attempt, I’ve learned that they can’t find the printing plates anywhere. In view of the fact that the original art was scattered around we just have Edgar’s and Weare’s masterpiece on microfilm in the British Library Newspapers, so, ditto: no Matt Marriott.
That’s how the amnesiac art of comics loses another chunk of its memory. It’s a huge shame that, on top of it all, it is one of its best parts…

Throughout the series Matt Marriott and his sidekick Jason “Powder” Horn, fulfill their odyssey wandering the West of the United States in a still divided (social wounds not totally healed) post Civil War. It’s a country in which the farmers’ settlements are competing with the ranch owners’ land (the Fence Cutting Wars). Other times the narrative focus is the railroad construction and the decimation of buffalo herds. Still in other occasions the social background is the Indian Wars. That’s the case in “The Territory”; not war exactly, I mean, but serious racial tensions that lead to blood shed. 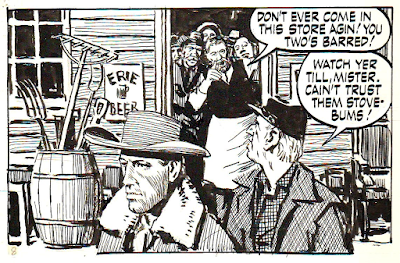 Marriott and Horn are expelled for defending the Indians. (I decided to illustrate this Stumbling with original art scans only. The image is a good metonymy of how “Matt Marriott” was barred from the history of comics for not being a children’s comic.) “The Territory,” Evening News, 1973.

But let’s leave the territory (Montana) alone for a while to give a general look at the series first. I’ll start by putting what I don’t like about it out of the way: the usual formulaic nonsense of mass art genre Westerns (the American monomyth, basically, or something even more boneheaded). Unfortunately it exists even in “Matt Marriott” and Tony Weare knew it and abhorred it (Ark, 1990, 47):

I would have liked the characters to have been fallible, but, of course, being cowboys they have to be infallible. If there was a scene where Matt  and Powder were camping out in the bush at night and they heard a noise, Powder would ask Matt if that noise meant there were Indians. Matt would calmly announce that it was an owl, and he’d be right. In another episode, Powder would say it was an owl and Matt would say it was Indians, and Matt would be right again. I always wished that they’d change it around for once. That side of cowboys is very boring. It’s the same with Batman. He can’t make a mistake either. […] In the gunfights the baddies shoot ten bullets and they all miss whilst the goodies shoot one bullet and it’s on target. I hated that side of it.

Me too!
As for the scripter, James Edgar, no one knows what he thought because of two facts: (1) comics fans like Denis Gifford (the only ones writing about comics at the time) suffered from acute childhood nostalgia syndrome: to them only old comics magazines like Comic Cuts were worthy of attention (even so Gifford wrote a 1971 ridiculously sparse “history” of British newspaper comics); (2) scripters weren’t even credited, let alone interviewed.
Anyway, in the International Journal of Comic Art (Vol. 9, # 1, Spring 2007) and elsewhere (Nemo Vol. 2, # 22, June 1996) I suggested the concept of the “absent hero.” A kind of Greek chorus that needs to be there for commercial reasons, but doesn’t intervene much in the action to avoid the cliché of winning the day every time. That’s what happens to Matt Marriott and Powder Horn in some episodes, but not in “The Territory,” or, at least, not completely. Looking at a fight between Marriott and the Miniconjou Indians is like looking at a rigged boxing match.
Almost every other narrative aspect in the series differ from more traditional genre tropes. The characterization, for instance, gives us a fresco of 19th century North American people that is unmatched anywhere. I’ll give you a small sample below. 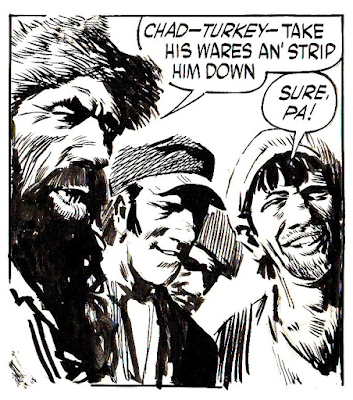 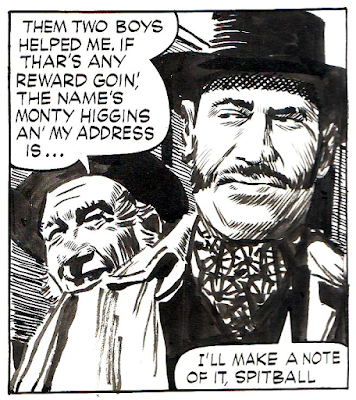 The Indians are no exception as we can see in the following great panel. 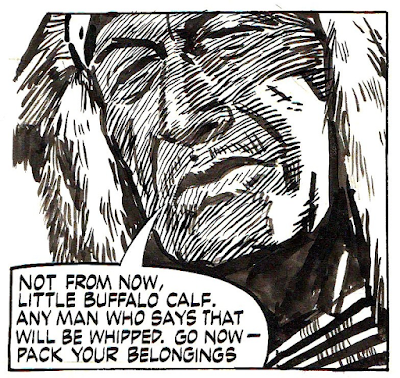 In a now familiar procedure (to the readers of the Stumblings, that is), the shadows on the exterior of the face, mirror the characters’ inside feelings. The procedure was first called to my attention by Alain Jaubert in his great Arte TV series: Palettes. “When the Bear Runs,” Evening News, 1972.

In “Matt Marriott” there are miners and soldiers, hunters and merchants, politicians and businessmen, herd drivers and outlaws, lawyers and doctors, bankers and lawmen, etc… Women are homemakers, sex workers and boarding house keepers. Tony Weare’s great characterizations are only matched by James Edgar’s colorful characters and colorful language. Doc Massey in “Marshall of Fireweed” (1959), said to Matt:  “How now my tall pillar of rectitude. There’s a puritan streak in you that doesn’t sit well with that gun on your hip.” The same Doc Massey described his situation after being mortally wounded as “being a little drunk with valediction.” “Powder” Horn wasn’t that bad with words either, as seen above in fig. 1 and in the below panel (in an old comics tradition the direct discourse is reproduced in pronunciation spelling). 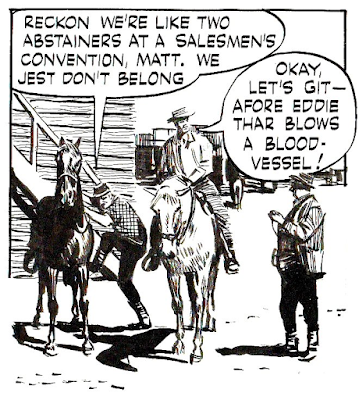 Tony Weare’s drawing style evolved from a more conventional naturalism to a rough impressionism that’s quite impressive in its mixture of looseness and preciseness. Besides admiring Weare’s uncanny ability to lay out a scene it’s amazing how he could instill life and expression to a couple of brush strokes depicting a face. Ditto for the body language. 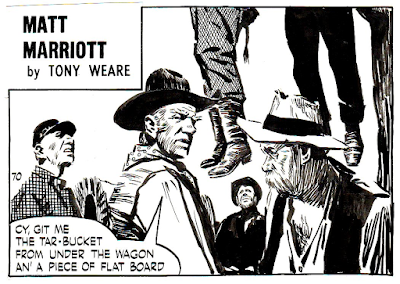 Tony Weare was also a master at shading. He was able to depict any moment of day or night simply by the intelligent use of black, white and the way he did the hatching and cross-hatching. I particularly like his dim lunar light. 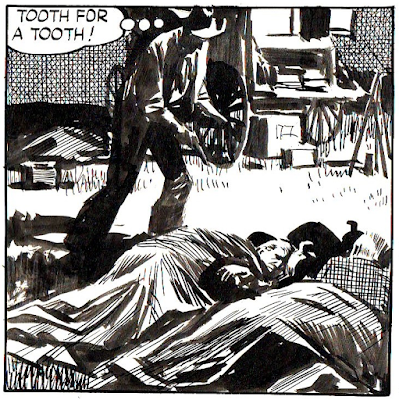 Other times I just like the nice touch of the little dog that no one seems to notice. 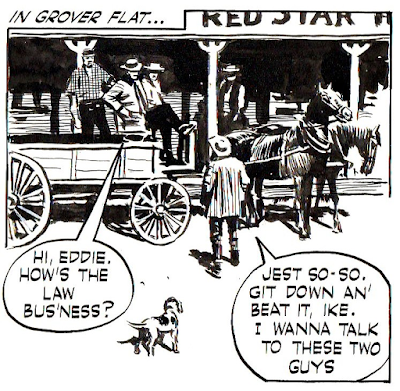 “Matt Marriott” was a daily strip published six days a week. Most of the strips had three panels which Tony Weare varied from medium shot to close up, varying the size of the panels accordingly (the closer the distance between the picture plane and the “object,” the smaller the panel; this is what Benoït Peeters calls: the rhetorical use of the page). This wasn’t a rigid rule, or anything, of course. Below, for instance, is an establishing shot in a two, not three, panel daily.

Like the Fates of old James Edgar was great at weaving plots. In his stories situations build on situations in a relentless pace. Actions have  (sometimes brutal) consequences. In “The Territory” (a “Matt Marriott” story arc that appeared in the Evening News between May 4, 1973 and August 23 of the same year) a series of unfortunate events lead to the death of a young Indian followed by the kidnapping of “Powder” Horn (the Miniconjou want to punish him) and a hazardous rescue by Matt Marriott and friend Sam Folsom; a man who lives with an Indian woman and knows a lot about Indian culture and the hunger inside the  reservations.

The grin in Horn’s face is explained by the fact that he’s a racist who feels pleasure in killing an Indian. This is one of those occasions in which Tony Weare would subvert the script – in cahoots with James Edgar or not, we’ll never know – going completely against the grain. The narrative implications of this simple drawing are huge. To say it in mass art lingo: the hero’s sidekick is suddenly a villain which means that the hero kills innocent people to save a guilty character. That’s what I call a good drawing (a drawing with meaning): technical skills only seems like a poor “set” of criteria to me. “The Territory,” Evening News, 1973. 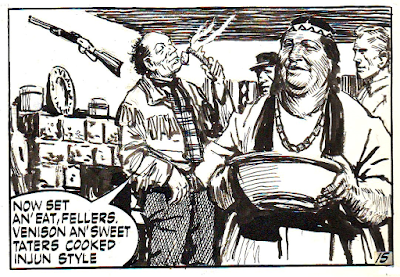 Sam Folsom and ‘Relish’: The sexual politics of the “Matt Marriott” series could be a post of its own. “The Territory,” Evening News, 1973.

As in any other Western there are lots of evil doers in “Matt Marriott” (in “The Territory” the enemy is racism and the unscrupulous store keeper who sold alcohol to the young Indians), but Manicheism is softened as much as possible because Tony Weare avoided the “bad guy” stereotype and James Edgar gave plausible motivations to his characters. If you want to know “whom” the real enemy is, read below: it’s one of my favorite comic panels of all time. 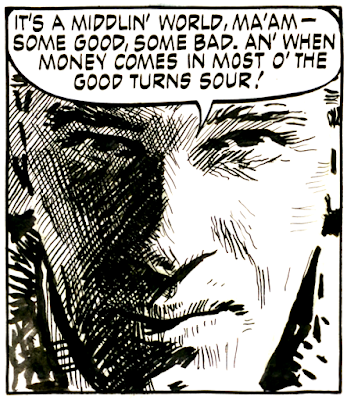 Light and shadows and shades of gray. “Gospel Mary,” Evening News, 1973.
Posted by Isabelinho at 6:49 AM No comments:

Too Big For Words! 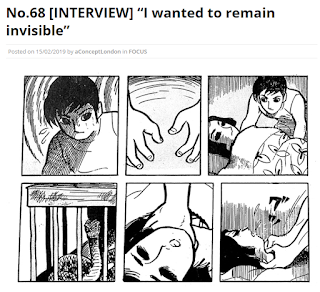 This is just too big for words!
Posted by Isabelinho at 8:30 AM No comments: