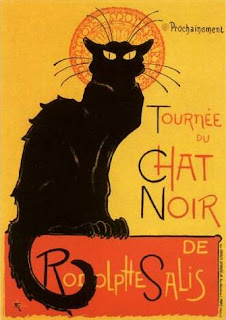 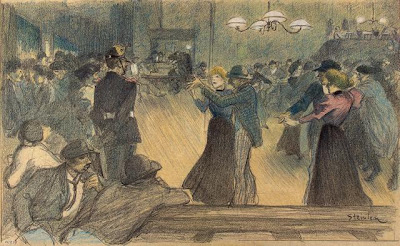 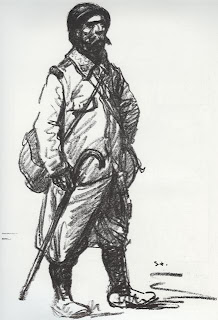 3.
Images:
1. famous Steinlen Japoniste poster advertising the Chat Noir's tour;
2. bal at Barriere: like a reporter, Steinlen depicts urban life (his style and theme reminds Toulouse-Lautrec and the impressionists);
3. a French soldier on leave with a cane (during WWI Steinlen insisted on his Realist mode; his melodramatic tone - not seen here - was apparently also part of his cause defending).
Posted by Isabelinho at 4:25 PM No comments:

Email ThisBlogThis!Share to TwitterShare to FacebookShare to Pinterest
Labels: Steinlen 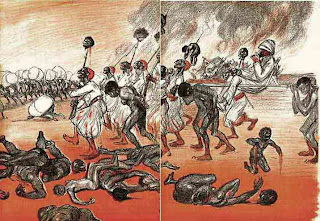 Born in Lausanne, Switzerland, Théophile Alexandre Steinlen lived and worked mainly in Paris. A prolific illustrator with a remarkably naturalistic drawing technique Steinlen recorded bohemian Montmartre's proletarians' lives (he was a Realist at the end of the century, but some of his drawings can't avoid kitchy "oh, the humanity!" melodrama). He's mostly known today because of his black cat advertising Le Chat Noir cabaret (Steinlen loved cats, by the way). During WWI he did propaganda against the Germans, embracing interventionism in Serbia, for instance...
Here's a great site dedicated to Théophile Steinlen:
http://www.steinlen.net/main.php
Here you can read La vision de Hugo, for free:
http://www.assietteaubeurre.org/hugo/hugo_f1.htm
La vision de Hugo is a denunciation of colonialism. French writer Victor Hugo is seen here as the heir of the romantic high ideals defended by the American and French Revolutions. If that's what their vision was, this globalized blood bath is what they achieved. Steinlen saw the lambs being slaughtered by arrogant Europeans in 1902 (let's not forget that the Paris Exhibition two years before had an incredibly racist human zoo), but he couldn't foresee how the wolves would attack each other a few years later provoking an equally huge carnage.
Image:
a double-page spread in La Vision de Hugo published in L'Assiette au Beurre # 47 (February, 1902).
Posted by Isabelinho at 9:08 AM 2 comments: 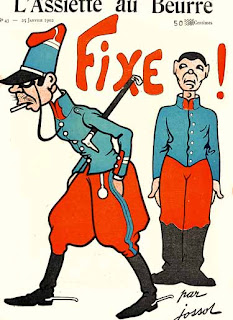 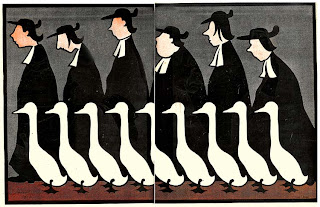 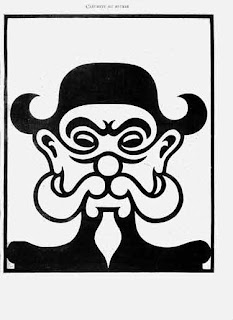 3.
Images:
stereotyping the Jossot way:
1. the officer and the soldier (the latter has to obey to the former who’s an idiot, of course);
2. the priests (a French saying states: “bête comme une oie” – stupid like a goose);
3. the policeman (he looks at us, poor citizens, in an angry way; he abides by the rules to the point of becoming a geometrical figure, a card in the deck of the powerful).
Posted by Isabelinho at 10:36 AM No comments: 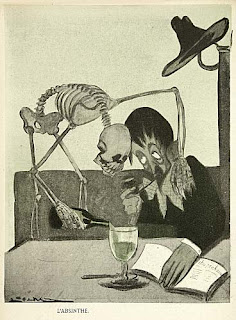 L'Assiette au Beurre (1901 - 1912) was a French anarchist satirical magazine. Great artists published their virulent words and drawings in the mag's pages: Felix Valloton, Kees Van Donguen, Frantisek Kupka, Juan Gris, Jacques Villon, are all important avant garde painters (from the nabis, Vallotton, to Fauvism, Van Donguen, to Cubism, the other three). This list would be impressive enough, but the best graphic artists of the age also published in L'Assiette: Benjamin Rabier (well known for his laughing animals, mainly for a certain cow linked to a cheese label), Caran d'Ache, Théophile Alexandre Steinlen (of Le Chat Noir fame), Adolphe Willette (ditto), Nadar, Gustave-Henri Jossot. Other contributors are not as well known as the above outfit, but they also deserve to be mentioned (a few at random; my excuses to all the others): Jules Grandjouan, Hermann Paul, Bernard Naudin, Aristide Delannoy, Louis Malteste, Ricardo Flores, Emmanuel Barcet, Auguste Roubille, Leal da Câmara. The latter is a relatively known, in his homeland that is, Portuguese cartoonist.
Here's a site dedicated to the magazine:

You can read Jossot's "Le credo", for free, here:

I have a confession to make: I have a problem with humor in the arts. I firmly believe that art's purpose (apart from formalist concerns that must always be present) is to unveil some kind of truth. Laughter, as Charles Baudelaire said more than a century ago (1855) is satanical:
http://baudelaire.litteratura.com/?rub=oeuvre&srub=ess&id=27&s=1
Either we laugh for frivolous reasons or we laugh at someone's expenses. I would place satire above the innocent joke (if such a thing exists) no doubt, but a satirical caricature is always a simplification. If manichaeism and scope reduction is what bothers me in most mass art (children's comics included, of course) why do I like Jossot's satirical comics? And are they even comics at all?
Certainly there's no lineal story in "Le credo" (a lifetime is told in "Dressage"). This narrative form is often called a cycle. Modernism allowed other art forms to expand their limits. I see no valid reasons to deny comics such freedom. Plus: does a comic really need to tell a story (lineal or otherwise) in order to be called, a comic? I don't think so, and that's all I'm saying for now. As for disliking, up to a point, I must add, 99 % of what the comics milieu considers a canon of comics why do I accept Jossot's acrimonious rants against authority? Precisely because mass art tends to be tame (the masses accept what they already know a lot better) and Jossot's work has that kind of desperate energy that exists in a powerless cry. It approaches (being a moralist, he doesn't achieve it) Baudelaire's absolute comic: the grotesque. Also: like everybody else, I'm biased.
Jossot's drawing style owes a lot to Émile Bernard's cloisonisme and Art Nouveau's wavy lines. As all graphic artists at the time he also owes a lot to Toulouse-Lautrec. His drawings impose their presence as emblems. His thick lines convey stereotypes in a perfect way.

PS I must add that, as I put it ages ago in Nemo, a humorist who laughs at his or her (our) own foibles and miseries is not satanic at all. I didn't know it at the time, but that's, more or less, what Giacomo Leopardi also said.

Posted by Isabelinho at 4:07 AM No comments: 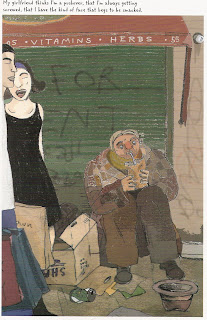 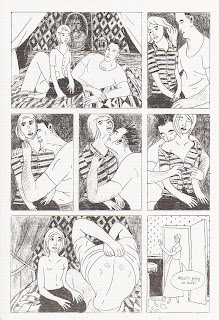 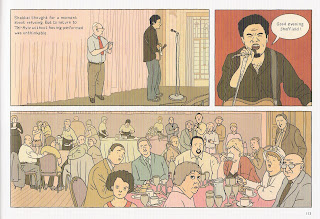 Images:
the evolution of Rutu Modan’s drawing style:
1. How to Make a Good Script Great, 1996: Kitaj inspired (?) pop expressionism with a naive twist;
2. Bygone, 2000: awkward punk or naiveté accepted?;
3. 2008: stiff caricatural clear line.
Notice how the layout in # 2 (a conventional grid, in Peteers' classification, with two bigger panels generated by fusion) draws a phallus in accordance with the page's theme.
Posted by Isabelinho at 6:59 AM No comments: 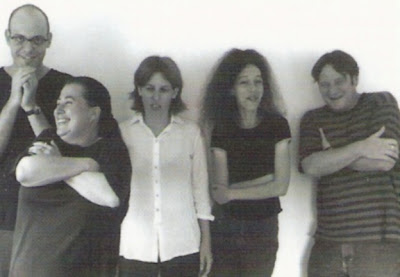 Rutu Modan is Israel's new star in the international comics firmament thanks to her great, instant classic, graphic novel Exit Wounds. She's part of Actus, a group of comics creators who began self-publishing as Actus Tragicus in 1995. To find my first contact with these artists (the aforementioned Rutu Modan, but also Etgar Keret - her scripter, if that's a word -, Yirmi Pinkus, Batia Kolton, Mira Friedmann, Itzik Rennert) I have to go back to 1996 when I bought four silvery covered comic books: How to Make a Good Script Great by Rutu Modan and Etgar Keret; Fotofix by Yirmi Pinkus; Eck Ova Souljah by Batia Kolton; Zipped by Mira Friedmann (no Itzik at the time). What's interesting re. Rutu Modan is to see her completely different drawing style back then. Not only that, but Batia Kolton (whose drawing style is now a better version of Rutu's - cf. Actus' last book How to Love) heavily retouched photos in a Bazooka mood back then. It's also interesting to see, in retrospect, how Yirmi Pinkus was the first to adopt an European looking, clear line approach.
The group's site is at (and I thank Ofer Berenstein for his timely post at the comics scholars list):
http://www.actustragicus.com/
Another interesting looking small press publisher from Israel is Dimona:
http://thecomicqueen.blogspot.com/2006/01/dimona-comix-group-spotlight.html
You can read "Jamilti" by Rutu Modan for free, here:
http://nymag.com/daily/entertainment/2008/09/wedding_dresses_and_suicide_bo.html#photo=1
Rutu Modan's drawing style is indebted to Hergé (and George McManus and Alain Saint-Ogan) inspired clear line, but it also looks like traced photos (there's exactly where Batia Kolton improves this style's look: hers don't). Her color sense is flawless. The flat color surfaces are great to avoid plastic computer coloring (a big thanks to Jeffrey Chapman for coining the expression) while still doing the job on a machine. Rutu Modan also does lighter contour lines in the background to achieve a sense of aerial perspective.
Her stories capture that bit of everyday strangeness we perceive in our disfunctional families', suicide bombers', always changing under our feet, global world.
Image:
Actus Tragicus (left to right: Yirmi Pinkus, Mira Friedmann, Rutu Modan, Batia Kolton, Itzik Rennert - 2000).
Posted by Isabelinho at 4:28 AM No comments:

Can you imagine an American newspaper comic in which "the hero" (to speak children's comics lingo) is engaged to one character while she's having an affair with another character who's married (a slacker, no less!)? Can you imagine Mary Perkins following her heart against social conventions and doing that? I can't. No newspaper or syndicate editor would allow it.
But that's exactly what happens in this masterpiece of the comics form that you can buy here.


The strips were reproduced from the original art and tearsheets originally assembled by the artist, David Wright, himself.


In a nutshell: great art, great visual and psychological characterization. I especially like David Wright's hatchings and cross-hatchings. He was at the peak of his abilities in the mid sixties, when this story was published, one strip each day, in UK's Daily Mail.

Posted by Isabelinho at 9:04 AM No comments:

It was February 24, 2004, 08:27 AM, on the Comics Journal Messboard. I'm not sure if this was the first time I listed these comics there (probably not), but that's what I did in that particular occasion. If I remember correctly (unfortunately I didn't write a crib sheet at the time) I did previously post what I now call "my canon" because I was fed up with the accusation of not liking comics at all because I found children's comics (and I do like Carl Barks' oeuvre) somewhat wanting (melodrama and manichaeism in particular bother me plenty).

This is a different list because I added a few titles over the last years: My Canon:

Carol Day by David Wright (strip # 2963). In the last panel we can see a medium close-up of Adam Boone, a character "played" by Matt Marriott's co-creator, Tony Weare.
Posted by Isabelinho at 5:19 PM 27 comments: