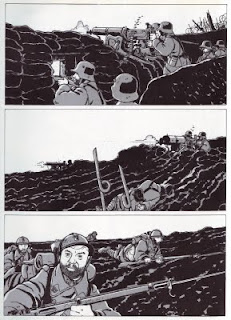 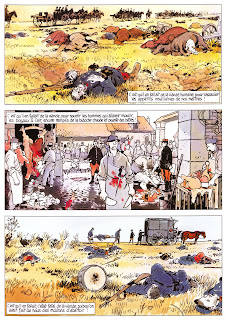 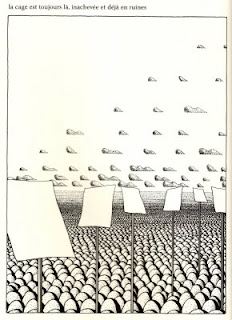 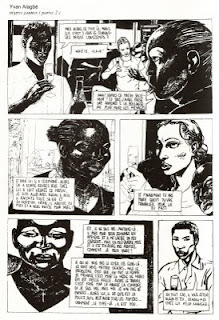 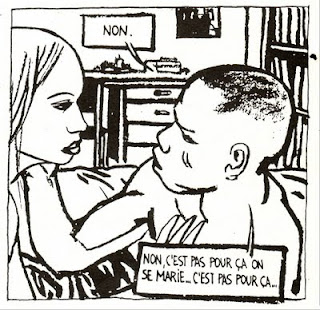 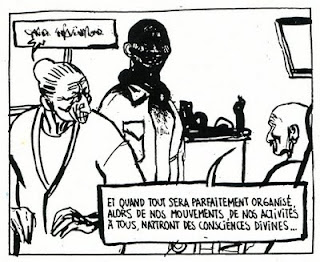 8.
Images:
1. The page layout as a meaningful device: the triadic rhythm in Jacques Tardi's C'était la guerre des tranchées refers to the French flag (as exemplified here by page 48 in Casterman's graphic novel, 1993);
2. in Jacques Tardi's latest book about WWI (Putain de guerre - fucking war -, Volume 1, Casterman, 2008; with Jean-Pierre Verney) he repeats the same mechanism, but... since Tardi also focuses on foreign soldiers (no problem when representing the Germans because their flag is also tricolor) it doesn't work when he depicts the Brits (the Union Jack isn't); in this particular page (8) soldiers are compared to sheep heading to a slaughterhouse: "Human meat was needed to satisfy the insatiable appetite of our masters! / Meat was needed to feed those who were going to die disemboweled, with their bellies still full of the beasts' smelly warm meat! / Meat was needed, it was unavoidable, because they turned us into slaughterhouse sheep!" - the tone of the text has a Celinian touch (my translation);
3. the series of drawn blank pages in The Cage by Martin Vaughn-James to which the previous double-page spread belongs: as published in La Cage, Les impressions nouvelles, 2006 (unpaginated); translation by Marc Avelot;
4. Yvan Alagbé changes his drawing style abrubtly in the last panel of page 26 of "Nègres jaunes"' second episode (Amok, Le cheval sans tête # 4, January, 1995);
5. Comparing these two panels (the first one published in the serialized version of "Nègres jaunes" - Le cheval sans tête # 5, May, 1995: 38) it's safe to conclude, I guess, that Yvan Alagbé created the subjective, racist, representation of Alain when he decided to redraw the whole story (the second panel was published in the graphic novel of the same title: Amok, 1995); note also how Yvan Alagbé simplified the panel;
6. Claire is "color blind" only when Alain says that he doesn't want to marry her just to get a green card (Le cheval sans tête # 5, Amok, May, 1995: 39);
7. Mario's mother mumbles something unintelligible, but looking at how she obliterates Alain's face, we know what she's saying: Nègres jaunes, Amok, 1995;
8. Mario rambles about how the world should be organized in order to function properly ("[...]each in their place, it all works better like that..." - translation by Ellen Lindner and Stephen Betts); looking at the second panel we have no doubts about Martine's place (Nègres jaunes, Amok, 1995).
Nègres jaunes is unpaginated.
PS I read in a couple of www pages some "outraged" comments (the word is too strong, hence the quotation marks) because I said that "Chris Ware's comics in The ACME Novelty Library # 18 are not mass art." I will not deny that I tend to prefer what's usually not considered mass art, but, in this case, if I remember correctly, I was just underlining the story's focalization in the main character's subjectivism, the story's lack of spectacular actions and Chris Ware's assertive layout style. There's absolutely no value judgment attached whatsoever...
Posted by Isabelinho at 6:17 AM No comments: 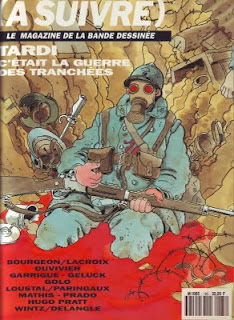 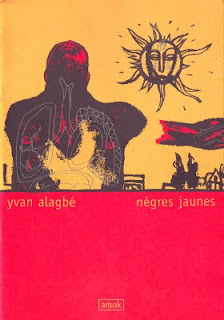 I read a lot of essays, reviews, articles about comics over the years... Sadly these still form most of my "to read" pile (I say "sadly" because, time not being stretchable and all... comics criticism expelled poetry, for instance, from my reading habits; yes Lídia, if you're still there, this still happens!). Comics scholars come from a few different fields and I enjoy every approach, but my favorite one is the formalist with a link to content (i. e.: someone who discovers a clever formal device with a communicative purpose that I, in my absent minded reading - or, some would argue, if they cared, my I. Q. impaired condition -, had not noticed).
From the top of my head I remember a few essays of the aforementioned kind by: Jan Baetens (about Hergé's Le secret de la Licorne - The Secret of the Unicorn), Pascal Lefèvre (about Kiriko Nananan's "Kisses"), Thierry Gröensteen (in his book The System of Comics), Joseph Witek (about Dean Haspiel's "91101" and a Brian Biggs' untitled short 9/11 story - even if I don't buy his essentialism entirely), Bruno Lecigne (about "La bascule à Charlot" - the guillotine - by Jacques Tardi, for instance), Pedro Moura (about Dominique Goblet's Souvenir d'une journée parfaite - remembrance of a perfect day)... you know?, the heavy weights!... but also by others that are more obscure critics (like Sylvianne Rémi-Giraud about Fabrice Neaud's Journal). Even so there were three occasions in which I said to myself: wow!, that's impressive! I mean:
1) Jacques Samson, "Stratégies modernes d'énonciation picturale en bande dessinée" (modern strategies of pictorial enunciation in comics) in Bande dessinée récit et modernité (comics, narrative and modernity), Futuropolis, 1988: 117 - 138; in which the author discovers a triadic rhythm in Jacques Tardi's C'etait la Guerre des tranchées ("It Was the War of the Trenches", published in English by Drawn & Quarterly - in Drawn & Quarterly Vol. 2, # 1 - 3, Autumn, 1994 - May, 1995; translation by Kate Sibbald; originally published as a graphic novel by Casterman, 1993, after prepublication in (A Suivre) magazine (to be continued - # 50, 53, 54, 58, 1983, # 181, 185, 189, 1993, and Le trou d'obus - the shell hole - Images d'Epinal, 1984); most of C'était la guerre des tranchées' pages are composed of three equal strips as wide as the hyperframe; Jacques Samson links this layout (and other triadic instances) with the French flag, the tricolor, which symbolizes the values of the French bourgeois revolution (liberty, equality, fraternity): grand words totally subverted in this absurd war (WWI); in the end what really happens in most wars is that poor people die to defend rich peoples' interests (soldiers die to defend the right of their people to be exploited by someone talking their own language?);
2) Marc Avelot, "L'encre blanche" (the white ink) in Bande dessinée récit et modernité (157 - 173) in which the author does a close reading of a blank double-page spread (!) in Martin Vaughn-James' The Cage (Coach House Press, 1975); in a book about how ephemeral and inadequate our communicating devices are, how can the writer/artist be self-referential about the book and the page?; as Marc Avelot pointed out in the aforementioned essay it can be read as a real page - in Saussurian terms a signifier - that's also a fictitious page - a signified); the thing signifies (it stands for) itself: Vaughn-James managed to write with no ink, hence "the white ink" of the essay's title; brilliant!;
3) and more recent: Hugo Frey, ""For All To See": Yvan Alagbé's Nègres jaunes and the Representation of the Contemporary Social Crisis in the Banlieue" in Yale French Studies number 114: Writing and the Image Today, 2008: 116 - 129. Hugo Frey comments that the black people's faces in the book are depicted by thick black brushstrokes when they're with white people (the gaze of the racist who's obsessed by color) and they're just outlined when they're among each other. (I will refine his thought saying that there are degrees of racism and "color blindness" in the book: Mario's mother is the worst racist and Claire - a revealing name -, Alain's girlfriend, is the least racist; even if she dates a black man she's not totally oblivious of his skin color...)
"Nègres jaunes"' (yellow black people) first version was published in Amok's Le cheval sans tête magazine (the headless horse) # 3 - 5 (October, 1994 - May, 1995). It was considerably altered by Yvan Alagbé for the definitive album edition (Amok, October, 1995).
The characters are all a bit lost in Nègres jaunes because they have to adjust to an hostile new culture. Mario is an ex-harki, an Algerian who sided with the French during the Algerian War (1954 - 1962). He's also a very lonely old man who is in denial of his latent homosexual desire for Alain. The latter belongs to a Beninese family who suffer because of a racist society and because they've lost their roots (Sam, the draughtsman, an Alagbé's alter ego?, we don't know that well; he's a very private person, lost among his drawings, lost in his own fantasies). I may be wrong (if one can be wrong when interpreting a polysemic text), but that's how I decode the title: African immigrants living in Europe didn't turn white, but they're not entirely brown anymore, they've been a bit bleached, they're "yellow." No one in the book is more "yellow" than Mario though... He wants desperately to reconnect with Africa, but he can't... Like Adam expelled from paradise after the original sin, Mario can't be a true African again after being a traitor. Traitors, as Dante reminded us, were put on the ninth and last circle of hell... their sin, like Judas Iscariot's, the worst traitor of them all, can't be redeemed... Despised by both sides their exile is absolute because it is an exile from the human race...

Images:
1. Jacques Tardi's "C'était la guerre des tranchées" as the cover of (A Suivre) # 185, June, 1993;
2. Martin Vaughn-James explains in this drawing how to link a The Cage blank double-page spread with the next one in order to interpret the former as a page that signifies itself because it turns out to be an extreme close up of one in a series of drawn pages: Bande dessinée récit et modernité, Futuropolis, 1988: 172.
3. Nègres jaunes' cover: Amok, October 1995; Alain is torn because Claire is his sun, but she's a cold sun ("he dreams of women with wide hips" - translation indicated bellow; all other translations are mine except for Hergé's book title, "It Was the War of the Trenches," "The System of Comics.")