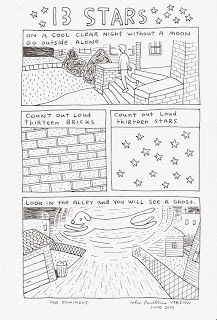 It was June 23, 1998. I was (and still am, even if it is completely dead now) subscribed to Usenet's comix@ mailing list. I fondly remember it even if, as usual, my www persona quarreled a lot in there. One of said list's regular features was Read This Comic under which members reviewed what they considered to be, well... comics worth reading...
John Porcellino is an important small-press creator who self-publishes King-Cat Comics and Stories - John told me just yesterday that issue # 69 will be available soon: check it out! His great graphic novel Perfect Example was published by now defunct Highwater Books (2000); La Mano published Diary of a Mosquito Abatement Man in 2005; a huge King-Cat retrospective was published in 2007 by Drawn & Quarterly.
If you remember James Kochalka's diatribes against craft you'll understand John Porcellino's DIY punk aesthetics (late eighties, early nineties). As time passed his drawing style evolved into a highly stylized, very simple, Zen-like minimalism.
As for Read This Comic, here's my contribution with minor changes (it was June 23, more than ten years ago; the last phrase is my touchstone to recognize greatness):
Sam is a story self-published by John Porcellino in the mini-comic King-Cat Comics & Stories No. 38, dated March 1993. Sam is short for Porcellino's she dog's name, Samantha Love. This story is about what she meant to him through her own life, his childhood, adolescence, young adult's years.
Porcellino's drawing style is what we could call minimalist: the characters are just diagrams and there's almost no backgrounds; shading doesn't exist and the lines have always the same thickness and shaky quality; there's almost no perspective (when it exists it's used with deliberate "mistakes"). King-Cat's outdoor scenes usually show a great composition sense conveying a slow pace for the little characters who wander through the sketchy, but well balanced landscape. These melancholic panels don't appear in Sam though... This is an indoor and intimate story (one panel in page four is the exception). Porcellino's drawings have a roundness that conveys warmness. (Conversely, the troubled adolescent in page five has a saw-like hairdo: a symbol of rebellion as we can see in the character Calvin of Calvin & Hobbes' fame, or Bart Simpson of The Simpsons' fame.)
The characters are shown mostly as talking heads. The most elaborate compositions in the story are those in which Sam appears (Sam's the star of the show, after all). Porcellino uses an eight panel grid, the same one once used by Dell in their children's comics. This transports Western readers directly to the past, but, at the same time, gives us a regular pace (most panels have an equal, if shaky, shape) which, like the regular beat of a clock, goes on and on unto the inevitable conclusion of us all, living beings: death.
John Porcellino's writing is as simple and straightforward as his drawing style. The lettering combines capital letters and small letters in a bad-good way that, again, is in accordance with the drawings being also typical of punk aesthetics.
All through Sam we can see how John's love for his pet grows. During his difficult adolescent years Sam was always there for him. In the end we can understand his sorrow when she dies. A particularly deep panel is the one in which his friend of many years turns her back on him: Sam's there but, at the same time, she's not there anymore. Soon she will die of old age and old animals (the same way as old people) bid their farewells to this world way before their loved ones bid farewell to them.
One of Porcellino's poetical one pagers, 13 Stars, is an epilogue to Sam. In it she appears as a ghost: the ghost of memory, the ghost of lost love and all lost things. So are all true works of art: ghosts that haunt us in a disturbing way. I, for one, found that reading this story was a truly haunting and marvelous experience. Sam is so simple and sad, and, yet, so beautiful...
Image:
A 13 Stars version that I commissioned to John.
Posted by Isabelinho at 9:15 AM