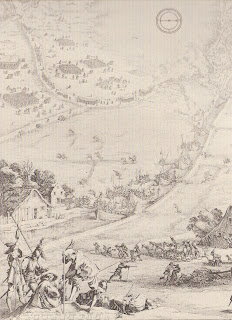 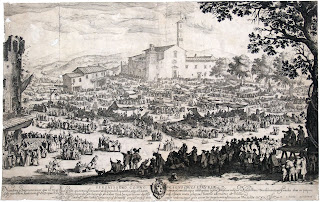 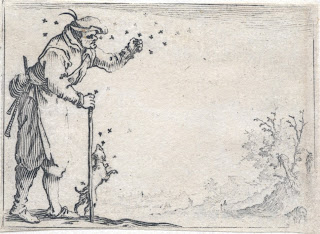 6.
Images:
1. self-portrait as a war correspondent in The Siege of Breda (1628. detail; a couple of "miseres de la guerre" can already be seen in the background);
2. The Fair at Imprunetta near Florence, Italy (1622);
3. A humorous caprice (c. 1617);
4. scene # 4 of Les Miseres: "Their brutal spirit prompts them to thefts in the wayside inn, which they cover with the fine name of booty. These disturbers of the peace deliberately quarrel in order to avoid paying their host, and even steal his pots and pans. When they have been properly primed with food and drink, they become prone to help themselves to other people's property.";
5. scene # 11: "These damned, infamous robbers, hanging like miserable fruit from the tree, prove in the end that horrible crime and evil purpose is itself an instrument of shame and vengeance, and that it is the destiny of vicious men to undergo sooner or later divine justice." (a similar scene happened in Kirscheidt a year later, in 1634; the Swedish army hanged the population);
6. scene # 17: "When the soldiers have committed so much damage, their enemies the peasants finally ambush them and kill them, stripping them to their shirts. Thus they revenge themselves on these miserable men for their lost property, for which the soldiers alone are to blame." (All translations: David Kunzle.)
Posted by Isabelinho at 3:02 PM