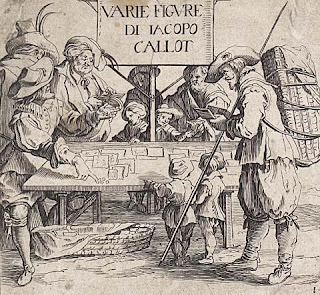 The year: 1633. The Thirty Years War was raging on. Jacques Callot was the right man to report it.
One of the first reporter-artists (if not the first one) Jacques Callot did many engraving cycles. The first one was Thirty Views of Rome, done a couple of years after he arrived in said city. Many more reportages would follow (Caprices of Various Figures, 1617, The Gypsies, 1621, Gobbi [Hunchbacks: these were Callot's shot at caricature drawing], 1622, The Siege of Breda, 1628). The latter is an impressive cycle of six huge prints recounting the events in a double-tiered strip. Other sieges would follow (Isle of Ré and La Rochelle, 1629 - 31).
Here's a site dedicated to Jacques Callot:
http://www.jacquescallot.com/
Baroque art was protean enough to favor sequentiality. If we add Caravaggio's Realism to the mix we get Jacques Callot's great Les Miseres et les malheurs de la guerre. Callot's drawings were incredibly complex, his lines were supple. His biggest prints, like The Fair at Imprunetta (1622) deny Scott McCloud's assertion that "there's no such thing as a sequence of one!" (Understanding Comics, 20). If the viewer gets lost in all the little, and yet, perfectly clear details, time and space are abolished as separate entities.
Callot's version of war in Les Miseres is not the usual glorification of the winners (in that case it would have been a mediocre piece of propaganda). The exception is the last scene, in which king Louis is incensed. Known once as La vita del soldato Callot narrates the enlistment of the troops and the battle but also what happened afterwards, when mercenaries plundered the war-ravaged region. Civilians were murdereded and raped, but Callot also shows us how they get their revenge killing the brutal soldiers. Punishment abounds: by hanging (Callot's most famous image is "The Hangman's Tree"), by firing-squad, by fire, with a wheel. After the war is over, maimed beggars seek help in front of an hospital. Some "children of the god Mars" even die in the streets. In the end, the true villain is war. Or, what's the same thing, the hubris and greed of a few...
You may see the Miseres, here (repros are far from great though):
http://www.jacquescallot.com/miseres.html
Image:
from the Various Figures series (c. 1617): Callot shows an Italian peddler selling his prints.
Posted by Isabelinho at 2:51 PM