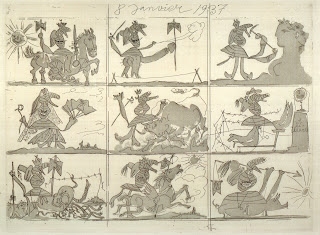 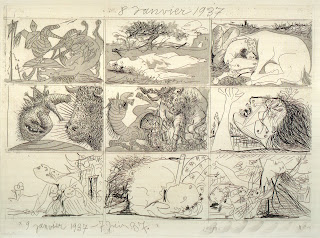 If Pablo Picasso was a Spaniard, although living in France, and I blog in English, why is the phrase Songe et Mensonge de Franco written above? Because the French title is an untranslatable Surrealist "jeux de mots" (a word play between "songe" - dream - and "mensonge" - lie).

Picasso's art was a barometer of Picasso's life. He was particularly sensitive to women around him (all great art is, in a certain measure, autobiographical). The art style that corresponded to his first wife, Russian dancer Olga Koklova, was Neoclassicism. Surrealism, especially the more politicized later one, was an antidote to him when their relationship soured in the late twenties, early thirties (his work from this period is full of vagina dentatta and mantislike figures). Even if Picasso wasn't a bonafide Surrealist he participated in the exhibition Vingt-cinq peintres contemporains (twenty five contemporary painters) in 1925 and other Surrealist activities like La Révolution surrealiste (issue # 1: December, 1924) and Minotaure magazine (issue # 1: June, 1933). In 1941 he wrote a Surrealist play: Le désir attrapé par la queue (desire caught by the tail). Before that, he wrote a Surrealist text that was meant to be published with the two Songe et Mensonge de Franco etchings (these, incidentally, would be sold, on behalf of the Spanish Republic, at the International Paris Exhibition in 1937; the images should be cut and sold as postcards, but Picasso saw the narrative flow that linked them and prevented the cutting):

Great post! I was never exposed to this PP´s material. Indeed, the title alone is reminicent of Quevedo´s best word playing.

I can read "semi-retired" in your profile. I´m wondering if there is someway to contact you regarding the "semi-active" part. (In any case, I´m at editor_cenizas@hotmail.com)

Thanks a lot Santiago!
The "semi-retired" part of my profile is a bit tongue in cheek, I must admit :) But it is also a kind of protest because this economical crisis we are living in ended the rather precarious life of the specialized magazines (and I don't mean the ones that talk exclusively about commercial comics; those are very much alive and well, I suppose).

Exactly about a "specialized magazine" of the type you mean is the motive of what I would like to contact you. (A little show off, wicht I learned just today: http://revistaleer.com/196/comic.html)

Hi! Please, can you tell me who did the translation from spanish into english of Sueño y mentira de Franco or Dream and Lie of Franco?
Thank you very much.
(I live in Mundaka, close to Gernika, or Guernica)

Hi Edorta, glad to hear from you!

If I remember correctly I was careful enough to credit all translators (myself included). If I didn't do it in this occasion it's because I didn't know. It's one of those things that "float" around the Internet uncredited, I guess... Anyway, a quick search pointed me to Ellen C. Oppler, but I'm far from being sure...