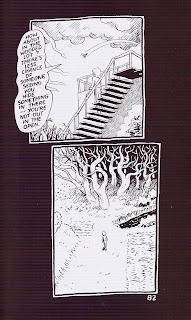 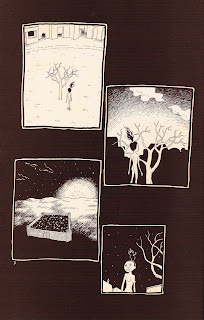 It was 06-24-99 08:18 AM on The Comics Journal Messboard and I posted the following (minus a pathetic attempt at humor and a few changes):

"I submitted only two of my poorly written articles to TCJ. As for the second one I can't even remember what it was about. I'm posting part of the first one here. Keep in mind that this was written in 1994, or something like that...

In page 17 of Yummy Fur # 21 Chester Brown (the character) decides to hide an issue of Playboy magazine in the bushes near his parents' house. This apparently simple action becomes a nightmare because of Chester's guilty complex: he imagines the neighbours spying on him with binoculars, someone hiding behind the trees, his recently deceased mother looking down on him from the sky with a reproving look on her face. All those menaces are well expressed in the twisted drawings of the skeletal branches. On page 11, panel 6 of Yummy Fur # 22 Chester goes into the woods again in order to hide another issue of Playboy magazine. The trees on the superior half of the panel look so twisted that they seem like a spider's web, waiting there to catch the uncautious Chester. Sigmund Freud, who first explored our unconscious mind (the hidden meanders of our brain), talked about Eros and Thanatos as the supreme entities that rule our obsessions. If said trees possess a menacing aspect it is not less true that they emanate a certain feminine erotic power: the tree that is closer to Chester looks like an inverted woman's body.

(First symbolic digression: in the centre of the world is the Tree of Life. It loses its leaves to regain them again, in a perpetual regeneration process. Sometimes it is represented in an inverted way in order to permit life to come from the sky and penetrate the earth. In the Upanishads, the Universe is also an inverted tree.)

In the first panel of page 12 of Yummy Fur # 22 it is remarkable that the branches are twirled as if in an erotic ballet. After being surprised by someone hiding in the bushes, Chester leaves the place extremely upset. The same trees that we have seen before gain an even more frantic movement now. The most poetic of all the stories by Chester Brown is, without a doubt, the one that he dedicated to his girlfriend Sook-Yin Lee (published in Yummy Fur # 31). In this brief story without words Sook-Yin's alter-ego assaults a deserted town in which center is a round garden with only a tree in its inner point. She lays down near this lonely tree sleeping there all night while being embraced by the branches. Next morning the town disappeared giving place to a desert. The tree is, now, Chester's alter-ego.
(Second symbolic digression: the symbolic town is always square. It represents a crystallization of the vital cycles. The town is related to mineral symbolism, it is a symbol of stability. The circle represents perfection, the unity, the world. The Earthly Paradise is round and is associated with vegetal symbolism too. The tree is a fertility's symbol of such power that, in certain nomad tribes of Iran the young girls are tattooed with a tree on their bodies, the roots on the pubic zone and the branches on their breasts. The tree is, at the same time, a phallic symbol and a motherly one. It is the hermaphrodite and so the unity.The desert is the origin, the purity of things.)
Chester's town is square and deserted. The only living thing in there (the only thing in there that's not crystallized) is the tree/Chester. Sook-Yin's alter-ego assaults Chester's alter-ego's crystallized self in order to reach and free his center. All the eroticism that is suggested by the drawings in Yummy Fur # 22 is openly showed here. All the adolescent pathos is now gone to give its place to adult love.

(Third symbolic digression: the night is the time for gestation, for the liberation of the unconscious mind.)
All the symbolic digressions were taken from the Dictionnaire des symboles. A collective work supervised by Jean Chevalier and Alain Gheerbrant."

My Comics Journal messboard post ends here, but the story goes on with a curious ut pictura poesis discovery. A poem by Argentinian poet Roberto Juarroz that has affinities (the same atmosphere and similar meanings) with Chester Brown's story (my translation):

We arrived at a sacred city.
We prefer to ignore its name:
in that way we can call it all the names.
We don’t find whom to ask
because we are alone in the sacred city.
We don’t know which cults are practiced in it.
The only thing we realize is that here there’s only one thread
uniting all the music in the world
and all the silence.

We don’t know if the city greets us or says goodbye,
if it's just a stop or the end of the journey.
No one told us why it’s not a forest or a desert.
It appears in no guide or map.
Geography keeps its location silent or it never knew it.

But in the center of the sacred city there’s
a square where all the silent love inside the world is opened.
And only now we understand:
what’s sacred
is all the quiet love.

Posted by Isabelinho at 4:00 PM