Lynda Barry's The Most Obvious Question 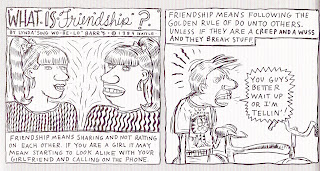 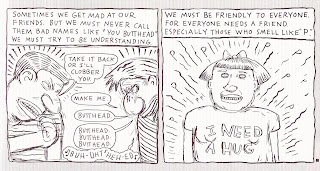 Do you remember when the Masters of American Comics exhibition's curators were accused of sexism? (Los Angeles: The Hammer Museum and The Museum of Contemporary Art: November 20, 2005 - March 12, 2006) http://findarticles.com/p/articles/mi_m0268/is_8_44/ai_n18764244/pg_1?tag=artBody;col1
The above Art Forum article (April 2006, XLIV, No. 8) by Sarah Boxer tells it all; I chose two quotes:
"[Invoking Little Nemo's mother: women are] the creatures that shake you out of fantasyland. No wonder they're not allowed in the clubhouse."
"Two frames from Jimmy Corrigan say it all. One shows a dull cityscape with a tiny bit of color, a caped superhero about to take a flying leap from a tall building. The next frame shows the tiny colored bit splattered on the ground. That's one small step for a superhero, one giant leap for comics."
Priceless!
Fifteen artists were chosen and not one of them was a woman. Plus: Sarah Boxer continues with the same accuracy demonstrated above: "from McCay to Schulz [...] the main characters are boys or men: Little Nemo, the Kin-der-Kids, Wee Willie Winkie, Popeye, Dick Tracy, Terry, Steve Canyon, Charlie Brown." I would add that gender doesn't matter to me as much as genre: there's no doubt that we're in fantasyland. Feminist critics, by the way, are almost the only ones to challenge the babymen status quo in comics.
I don't advocate some kind of positive action in the arts, but, in this case, Lynda Barry is the blatantest absence from this people's (John Carlin, Brian Walker, Cynthia Burlingham - a woman! -, Michael Darling) epitome of mastery.
Ernie Pook's Comics (later: Ernie Pook's Comeek) was Lynda's first comic. It was published by her pal Matt Groening and John Keister in the newspaper of the University of Washington. Ernie Pook's had two phases: first it was about male / female relationships; later it was about childhood. Lynda Barry explained the change in an interview with Thom Powers (The Comics Journal # 132, November 1989: 66 - when will this mag interview her again?, if I may ask...): "my hand started to really hurt when I drew, so I had to use a brush instead of a pen, and there was something about using a brush that made it so I couldn't draw that same kind of [editorial strips] [...]; they just didn't look right in brush to me. [...] When you start to work with a brush, the drawings start to look retarded, and the retardation, the natural retardation that comes from using a brush, sort of made my writing get retarded. [...] In kind of a nice way. Like one of the first strips in which the voice that I use now appeared in is "What Is Friendship?"
Lynda Barry is known for including a lot of words in her strips. I don't understand the comics milieu's logophobia, but it was demonstrated once again when Art Spiegelman invited her to participated in Raw. Lynda, in the same interview (74): "Art said "Try not to make it so top-heavy, with so much writing." I almost started laughing, because that's my work: it's really dense and it has lots of words." Even so she seems to have complied, "The Most Obvious Question," Raw vol. 2, # 3 (Penguin Books, 1991) has a caption in every panel (it's Maybonne's voice in "voice over"), but I'm certain that there are captions in Barry's oeuvre with a lot more text than here. The inner narration is a counterpoint to the outside world shown by the images. Against expectations, though, it's the supposedly subjective words that are cold, distant, desensitized, slightly ironic and the supposedly objective images that blend everything in a fuzzy web of curves, hatchings and cross-hatchings.
Searching for a golden age when her family was happy (we always lose our paradises) loveless Maybonne fakes the gestures of love (Lynda Barry hides Maybonne's eyes behind her glasses, underlining her alienation, except in one panel in which she remembers a blissful scene). Her mother achieved the next level: she doesn't even bother anymore.
Images:
horror stats by the Guerrilla Girls, Washington Post, April 22, 2007 (detail): http://www.guerrillagirls.com/posters/washposthorror.shtml ; "What is Friendship?" comic strip, parts one and two, has it was published in Everything in the World (Harper & Row, 1986).
Posted by Isabelinho at 9:18 AM

I'm waiting for the Coda on this one.

I thought it was great that you listed "The Obvious Question" in your list of top comics.

I saw "The Obvious Question" and "Sneaking out" first in compilations a friend loaned me. They made me a lifelong Lynda Barry believer.

I'd love to hear what you think of the sometimes a picture book sometimes a collage style she developed in 100 DEMONS and WHAT IT IS.

She uses it again in her intro to THE BEST COMICS OF 2008 as well. There the obvious structural challenges to comics are in the background and the now familiar painted figures on yellow paper can really come to the fore, almost scintillating with her unique color patterns.

I've always been struck by the complaint that she uses too much text. Or that she can't draw. I mean, the work works. I think the new picture book to collage style is great but I imagine it will only increase that criticism.

But that's what I think. What do you think?

As some of you noticed, I'm sure, my scanner is less than great, to put it mildly. I'm now waiting for a new one, but, in the meantime, I'll do the Lynda Barry coda tomorrow, hoping to substitute the images in a few days.
I completely agree with you, Lynda Barry should be considered one of America's national treasures. The usual criticisms that you mention are as much baloney. Why are "too many words" a bad thing in comics? (When do they begin to be too many?, what's wrong with "top-heavy" panels, as Art Spiegelman put it?) What's a bad drawing? My opinion is that, behind these criticisms, there's a stereotyped view of comics: comics should be action packed romps; the drawings should be done by a show-off virtuoso. Great things can (and have been) done in this way, I suppose, but these aesthetic criteria are too narrow. I see nothing wrong with words (they slow down the reading pace, but so what?, are comics readers in some kind of race?) and I prefer an artist who actually can convey human emotions (as Lynda does) to someone who just does pretty pictures.