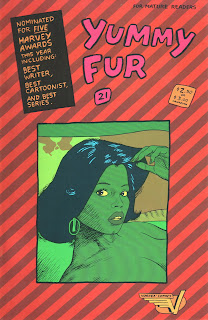 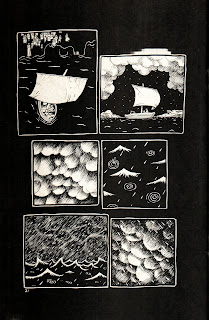 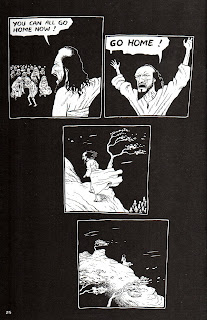 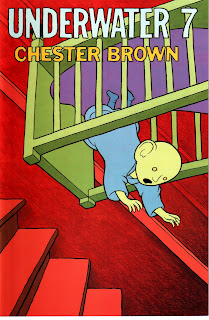 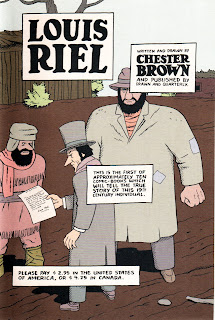 5.
Images:
1. Chester Brown's first autobio story "Helder" was published in his comic book Yummy Fur # 19 (Vortex Comics, January 1990); "The Playboy" (titled "Disgust" and "The Playboy Stories") began serialization in Yummy Fur # 21 (June 1990); "Fuck", or, the more commercially viable, but less accurate, "I Never Liked You" began serialization in Yummy Fur # 26 (Drawn & Quarterly, October 1991);
2., 3. pages from "Mathew", an adaptation of the Bible which is respectful of the original writing, but, being caricatural (Chester Brown admires Harold Gray) avoids any kind of visual Idealism: page twenty one, Yummy Fur # 24 (April 1991), page twenty five, Underwater # 3 (May 1995; the loneliness of the prophet is similar to the loneliness of the artist); worthy of note are Chester Brown's innovative layouts: he drew separate panels constructing the pages afterwards;
4. a curious experiment that reminds, in this cover (Underwater # 7, August 1996), Little Nemo in Slumberland by Winsor McCay because it shows the psychological and physical development of a pair of twins: they can't understand what the adults are saying at first (they can't understand social conventions, either) and confuse dreams with reality; unfortunately Chester Brown decided to stop this series with issue # 11;
5. Chester Brown's acclaimed graphic novel Louis Riel started here: Louis Riel # 1, June 1999.
Posted by Isabelinho at 11:28 AM