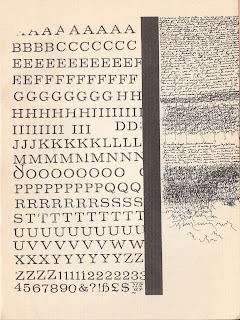 Here's how Ana Hatherly presented O Escritor [The Writer], a difficult visual text, to it's readers (my translation):
"O Escritor is a narrative in 27 phases. Each image is a pictogram, a photogram frozen on the page whose meaning is set in movement by reading. Reading is always multiple because, to the illusion of seeing, we add the illusion of reading. All pictograms are also cryptograms.
The history of imagination is also the history of imagination's vocabulary which implies what Coleridge called "the voluntary suspension of disbelief."
Between the author and the reader an accompliceship is created: possessed by a common code they decode each other.
That's how they institutionalize themselves.
The author and the reader are systematic explorers - the author presents the paths' map and the reader walks along them, but his wandering is freely conditioned.
The author creates the path of the experiment and walks ahead first, but when he publishes it, he betrays it, he changes it, that's how the experiment surpasses him.
It's at that instant that it acquires the value of a document because, referring to him, it also refers to itself: the publication is the summation of a series of acts, which, in themselves, also refer to a multitude of coexistences. If, to the author, the publication is the final phase, to the work it's the first one. So, the publication of his experience is as documental as the interpretation that the readers will perform.
O Escritor simultaneously documents a path and its petrification in the text, the way in which text gains autonomy, the way in which the former disappears into the latter: the way in which the writer substitutes talking for writing, his higher, more ambiguous, voice.
That's how different degrees of text legibility turn into a challenge to the construction of meaning.
The reader becomes a witness who testifies, acting in that historical process.
O Escritor, done between 1967 and 1972, may be particularly idiosyncratic of a difficult phase in which some Portuguese writers of the authoress' generation suffered discouragement and disbelief. Revolt and repulsion compelled them to continue, but, at the same time, mined their work. In that regard, it's also a necessary representation of a prolonged state of repression.
A. H., January, 1975."
The "prolonged state of repression" Ana Hatherly talks about is the Fascist régime that existed in Portugal from 1926 to 1974. It's interesting how this text is already influenced by post-structuralism: author and reader are possessed by the code instead of possessing it. On the other hand there's also present a major 20th century theme that Derrida inherited from modernism: the impossibility of communication.
Ana Hatherly wrote another text in which, contradicting a bit the above statement, she explains the book (adding that hers is just one of many possible readings). It would be fastidious to transcribe it here though. Let's just say that her themes are: the text and the writer; the fight between the writer and institutionalized culture (repression, as she put it above).
The last text in O Escritor (my translation):
"words fall on the writer's face like curtains of water that close over the horrified face of the poet the poet is inside in the inside or else he's outside the symbol falls over the uncovered face the face of discovery I sit down in my little glass box that is the page that isolates me and exposes me the words of the poet appear go up go down above all they are born exasperating the slowness of my hand writing all this unreadable because I write the act of writing the experience of expressing it without expressing I mean trying a thousand writings descend from where they descend they spring from unreadability laws on one side laws on another side everywhere there are laws to transgress."
Image:
O Escritor's last page: Caslon Neoclassical typography symbolizes the institutionalization of culture. This is highly appropriate because Neoclassicism is one the state's preferred architectural styles. In the end Ana Hatherly fights a conundrum (a lost fight): either she accepts the norm or she falls into incommunication. There's no meaning outside commonly accepted rules. There's no meaning outside the system.
Posted by Isabelinho at 9:00 AM