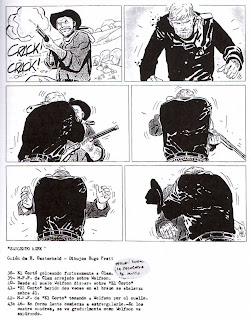 In 1961 Argentinian comics writer and publisher Héctor Germán Oesterheld sold his publishing house, Editorial Frontera. He suffered serious economical difficulties since the end of 1959. That's why, trying to minimize his debts, he sold Hugo Pratt's original pages in his possession. Retaliating Hugo Pratt published their stories in Europe without acknowledging Oesterheld's co-authorship. I'm saying this not as some sort of gossip (Buenos Aires Babylon, or something...). I'm saying this because comics critics in Europe never acknowledge Hugo Pratt's debt to Oesterheld's writing mastery. If their excuse is ignorance because they never saw the writer's name in Sgt. Kirk, Ticonderoga, Ernie Pike, it's a weak one because critics should know what they're talking about.
Franco Fossati in the Spanish mag Bang! # 9 (1973), for instance, is clearly operating in bad faith: in an article about Hugo Pratt, Oesterheld's name appears once, in a list, among many other names (talking about Ernie Pike - the name comes from American war correspondent Ernie Pyle, the face is Oesterheld's - he says that Pratt "was inspired by a friend's face to create Pike's"). Fortunately Spaniard editors read Argentinian mag Dibujantes # 21 and added a note or two restoring the truth. Closer to us in time it's not possible to feign ignorance: there's simply too much information circling around and Héctor Germán Oesterheld is the creator of adults' comics in the restrict field (the comics milieu, I mean). Not that he intended to do so. In his mag Hora Cero Semanal's cover, he stated: "Historietas para mayores de 14 años" (comics for people over 14 years old). What happened was that he worked a lot. Some of his stories are just average, but when they're good, they're very good. Here's what Oesterheld wrote on Hora Cero Semanal # 1's back cover (September 4, 1957; my translation):
"LET'S DEFEND COMICS
There are bad comics when they're badly done only.
Denying comics all together, condemning them as a whole, is as irrational as denying cinema all together because there are bad films. Or condemning literature because there are bad books.
There are, unfortunately in a huge ratio, lots of bad comics. But these don't disqualify the good ones. On the contrary, by comparison, they should underline their quality.
We believe that our comics are good comics. By good comics we mean strong comics, comics that are stout and cheerful at the same time, violent and human. Comics that grab the reader with fair, reliable, means. Comics that baffle the reader because they're new, because they're original, because they're modern, they belong to the present day, they may even belong to the future.
FRONTERA and HORA CERO are proof enough of what we're saying: the readers know it because they chose our stuff.
With HORA CERO SEMANAL we believe that we've outdone ourselves: we are sure that we assembled quality comics in a way that's hardly repeatable.
It's with legitimate publishers' pride that we bring to you HORA CERO SEMANAL knowing that it is a new valuable addition to our magazines which, turning their backs to cheaper, inferior, imported stuff, open their pages to Argentinian stuff. Said stuff (someone has to say it sometime) conquered, without protection or help of any kind, a dignified place among the best stuff done in the world.
To the readers, to the publishers of good comics, our sincerest regards.
EDITORIAL FRONTERA"
I don't suppose that Dominique Petitfaux is ignorant when he makes this outrageous allegation in Casterman's tome 1 of the series, 2003 (I may be wrong though; my translation): "Silence is a very important theme in Ernie Pike. When we know those long mute sequences in Hugo Pratt's oeuvre, it's easy to guess that those panels without words were created by the draughtsman who wanted to counterbalance the beautiful, but long dialogues - and sometimes useless captions - written by the scriptwriter. If the silence after Mozart is still Mozart, silence after Oesterheld is Pratt." To be fair, he wrote the word "guess" somewhere in his diatribe. But guess work is incredibly unprofessional for a so-called critic. The truth is that Hugo Pratt is a sacred cow and Oesterheld is no one outside of Argentina. Videla's thugs killed this great master, European critics killed his memory and usurped his rightful place in comics history.
Image:
Sgt. Kirk page written by Héctor Germán Oesterheld and drawn by Hugo Pratt. Where are those long dialogues and useless captions? By the way: even the name "Corto" (yes, as in "Corto Maltese)" was used first in Sgt. Kirk by Oesterheld.
Posted by Isabelinho at 12:23 PM

BRAVO! i´m from a neighbour country, Brazil, but even here the argentinian comic masters are still pretty much ignored. (exceptions being Quino and, uh, Maitena - who i wouldn´t qualify as master though).

I´m sure that Hector German Oesterheld shall be soon rediscovered, as he is one of the great writers of the sequential art. Perhaps the El Eternauta adaptation coming (with the prestige of Lucrecia Martel, we´ll see a little more praise about him.

Thanks gr! I hope so too. The fifties in Argentina were pretty amazing mainly because of Oesterheld's Editorial Frontera (great artists published there: Hugo Pratt, sure, but also: Arturo del Castillo, José Muñoz - a graduate from Escuela Panamericana de Arte -, Alberto Breccia, Carlos Roume). This is an art form without memory, this much I know, but we can always hope...

Hi Domingos -- I think it's awesome that you're championing the great work of Oesterheld. I agree that he was a writer of singular quality and that it's a shame he isn't remembered properly.

I'm sure things will change gradually, however -- the faulty memory of comics culture that you're talking about seems to slowly be getting patched up these years. There's still a long way to go, of course, especially in Europe...

Another thing: I don't see the need for downplaying the genius of Hugo Pratt in order to emphasize Oesterheld's qualities. YOU don't know whether the latter wrote that quiet scene either, and to denigrate the amazing work Pratt went on to do on his own just seems like unnecessary provocation.

Thanks again -- I'm thinking I should go (re)read some Oesterheld now...

Hi Matthias: first of all thanks for your comment.
You're right, in the end I know as much as Dominique Petifaux, but I hope to, at least, have created some doubt by showing a silent scene written by Oesterheld. Petifaux says that it is easy to guess that Hugo Pratt inserted those mute scenes in _Ernie Pike_. I say: no, it's not easy at all. Without proof, we know nothing. As for downplaying Hugo Pratt work, that's my opinion is all: I simply don't like it. I guess that I can say, paraphrasing Dominique Petifaux: what's juvenile and hollow in Corto Maltese et all is Pratt's, what's great in Pratt's oeuvre is Oesterheld's.

So you find all of Pratt's post-Oesterheld-collabo work juvenile and hollow? And that he can't be given credit for every special moment in the many Corto books -- for example the quiet ones -- despite the fact that he went through a substantial artistic development over the many years he worked solo, because you *think* he learned it from Oesterheld?

Seems a little harsh to me. But that is, of course, part of what I like about your stand on comics :)

I resepctfully disagree is all -- Pratt's comics work is stunningly evocative and inventive -- not to mentioned drawn like a dream.

I concede that some of his work, especially the watercolours and such, plus his late collaborations with Milo Manara, is rather superficial, but fail to see how that subtracts anything from the mystery, adventure and emotional charge of his best comics work.

The only think that I like in Pratt's work (and I'll give him credit for it; Oesterheld's female characters were... ahem, a little underdeveloped) is Corto Maltese's love life, or lack thereof, that is... I'm refering to exactly two moments in the Corto Maltese series: the end of _The Ballad of the Salty Sea_ (Pandora); the end of _Corto Maltese in Siberia_ (Shanghai Li).
But I haven't read Pratt in ages. I would also like to compare Pratt with Oesterheld and Pratt as a solo artist. Only after that would I be able to back my opinions on more solid ground.
Anyway, I see Pratt as a great artist who wasted his talent in commercial ventures (and I don't blame him for it). I can't forget Guido Buzzelli's portrait of Corto Maltese: that's what Corto Maltese would *really* look like (I'm not easily impressed by mannerist pretty drawings). Pratt was once great and it was not only because of Oesterheld. Later Pratt is all surface...

I`m argentinian, and I grow up reading HGO & Pratt's historietas (this is the argentinian word for "bande desinee" or "comic".
It's a shame, a really shame that the author name and memory twice is been oblitered by the system.
Thanks isabelinho! your work is great and precise.

Thanks Té! I'm pleased to say that I met Elsa Oesterheld and Oesterheld's grandson Fernando last weekend. I was floored by what she said at a panel she was in. A great lady indeed!

Hi! I'm argentinian. In my life (45 years old) I read many historietas (comics) of HGO and Pratt. I liked "EL ETERNAUTA" from HGO and Solano Lopez. You have to read it if you know spanish (I supouse that it must be published in English, I don't know) and from HGO and Alberto Breccia (Another monster!!) "Mort Cinder" and "Sherlock Time". Please, don't have to miss "Ticonderoga" from HGO and Pratt, to. I like to much your write from HGO. Ah! I forget!! Yes, the fifties were pretty amazing for argentinian historietas. But de seventies were great to. Record editorial, with Skorpio, Corto Maltes, Pif-Paf and Tit-Bits published very historietas with greats artists. Some re-published (from the fifties) and some were news (like Corto Maltes, Barbara, Henga, Alvar Mayor, etc...) Don't forget the monsters of all this: Carlos Trillo, Horacio Altuna, Enrique and Alberto Breccia, HGO, Zanotto, Del Castillo, Pratt, Grassi, Lito Fernandez, Morhain, Szilagi, Roume, Muñoz, Barreiro, Gimenez... and many others. Please read "As de Pique" (no the Pratt's "As") from Barreiro-Gimenez (Gimenez is the same that worked with Enki Bilal!!) is a story of an airplane (B-17) of the WWII named "As of Pique".
Regards,
Marcelo H. Piñeiro

Hola Marcelo:
Thanks for your recommendations. Some I've read, some I haven't.
It's not from the seventies, but I do own a few issues of _Fierro_ magazine (add a couple of _Skorpio_s). Alberto Breccia is really amazing, by the way (post about him in the near future, that's a promise). Incredibly _El Eternauta_ was never published in English. Fantagraphics books did publish part o _Perramus_ ages ago, though...