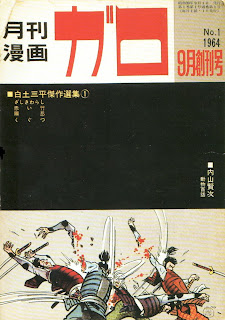 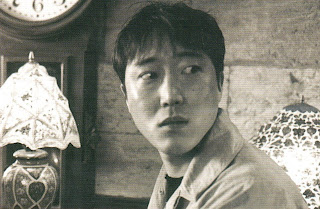 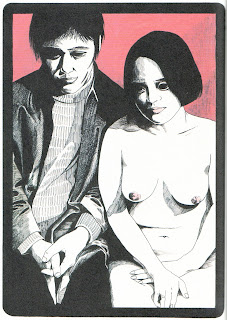 There are only a fistful of comics anthologies that pulled back the art form from the commercial hell (of children's adventures dreck and silly humor) in which it was imprisoned by the lords of kitsch. I mentioned a couple already, here at The Crib: Madriz (Spain, 1984), Frigorevue and Frigobox (Belgium, 1992, 1994). I'm sure that I will cite a few more in the future: Raw (U.S.A., 1980), Labo and Lapin (France, 1990, 1992), Lápiz Japonés (Argentina, 1993). The first, though (if we don't count satire: Hara-Kiri, France, 1960) is Garo (Japan, 1964).
Postwar in Japan was a period of economical crisis. Tormented by the deadly combo of unemployment and inflation the lower level of the Japanese society found itself in a precarious situation. In such a state of affairs people not only seek, they need to be entertained. The problem is that their entertainment has to be very cheap. That's where pay-libraries enter our picture. Loaning books for a fraction of their price (7 or 8 yen against 30 to 50, according to Béatrice Maréchal in 9e art # 10, April, 2004: 68) these pay-libraries flourished in recession-ridden post war Japan.
Yoshiharu Tsuge was born in Tokyo in 1937. After his father's death in 1942 he lived with his mother, stepfather, two younger brothers and two half-sisters. He always liked to draw and wanted to become a comics artist. Creating comics to the pay-libraries' editors was both an attempt to solve his economical troubles and the accomplishment of a dream. His first comic was published in 1955 showing Osamu Tezuka's influence.
In 1957 Yoshihiro Tatsumi coined the term "gekiga" (drama pictures) to mean more mature, closer to reality, darker stories (before Tatsumi's generation Japanese comics were also mostly aimed at children). On the other hand pay-libraries' editor Katsuichi Nagai published Sampei Shiratô's left wing, historically set stories (Ninja bugeishô). It's mostly for him, and with his help, that he decides to publish Garo magazine (as can be seen on the mag's first issue's cover above). Garo ("fanged wolf", but it also has the word "ga" - image - in there) was so named after one of Shiratô's characters.
From 1964 through 1997 (with a couple of false restarts after its main run) Garo published many important Japanese comics artists. Yoshiharu Tsuge was one of them since the mag's first years, but there were also: Yoshihiro Tatsumi, Seiichi Hayashi, Shinishi Abe, Ôji Suzuki, Kazuichi Hanawa, Yoshikazu Ebisu, Shungicu Uchida, Teruhiko Yumura, Hinako Sugiura, among many others...
In 1966 Yoshiharu Tsuge suffered one of his periodical depressions and stopped drawing his own stories to be Shigeru Mizuki's assistant. It's under his influence that Tsuge becomes partly a Naturalist. From now on his highly detailed backgrounds will be as important as his cartoonish characters.
Mitsuhiro Asakawa published a great overview of Yoshiharu Tsuge's relatively short career in comics in 9e art # 10 (April, 2004: 62 - 68). He classified Tsuge's oeuvre in three different kinds: life stories, travel stories, dream stories (as Béatrice Maréchal called them in "On Top of the Mountain," The Comics Journal Special Edition, Vol. 5, 2005: 22 - 27). Japanese writers distinguish two varieties in autobiography: one that deals with a public persona (jiden) and one that deals with more private affairs (watakuchi). Tsuge's I-comics belong to the latter classification. As Chôkitsu Kurumatani stated (as quoted by Béatrice Maréchal in the above cited text: 24): "I-novels question the root of one self's existence... this ominous and mysteriously unknown part that hides inside the ground of daily life." (This is marvelously put and makes perfect sense to me: I always distinguished between Chester Brown, John Porcellino, Fabrice Neaud, and mostly all the others who did autobiography: the former had the courage to expose themselves doing watakuchi, the others just dealt with daily life's foam.)
"Nejishiki" (screw-style; Garo, June, 1968) is a dream story that, as in "Numa" (marsh; Garo, February, 1966) joins thanatos (including a war ravaged Japan) and eros (a female surgeon solves the main character's health problem performing a strange mix of sexual intercourse / surgery operation). I committed the error of not putting this story in my personal canon. Hoping to come back to Yoshiharu Tsuge's comics... (to all the other stories that I read in English and French, that is: "Ô ba denki mekki kôgyôsho" - Oba's electroplate factory -, Manga Story, April, 1973 [Raw, Vol. 2, # 2, 1990]; "Akai hana" - red flowers -, Garo, October 1967 [Raw Vol. 1, # 7, 1985]; his last series Munô no hito; a useless man, Comic Baku, 1985 - 1987 [L'homme sans talent, Ego Comme X, 2004])... I'm correcting it now.
Images:
1. the cover of ガロ # 1 (Garo, September, 1964): as published in Paul Gravett's Manga (Laurence King, 2004); the image illustrates Shiratô's story "Kamui Den" (the legend of Kamui);
2. according to c. bren (cf. comments): "the center image is Tsuge as portrayed by the actor Shirô Sano in Teruo Ishii's 1993 film Gensenkan Shujin, which is based on several stories of Tsuge's" (image as published in a 1993 poster);
3. Tsuge as a character in one of his stories (with another character: Yanagi inn's owner; Maki Fujiwara?): "Yanagi-ya shujin" (the master of the Yanaga inn) Garo (February, March, 1970): as published in Kusetsu juunenki (which someone translated for me on the Comics Journal messboard, ages ago, as: a period of ten years' unswerving devotion; Chikuma Shobô, 1994).
Here's a relatively recent photo and an impressive list of comics' absolute masterpieces:
https://www.chikumashobo.co.jp/author/000400/result?p=&g=&order=&desc=false
"Nejishiki" (screw-style), as published in The Comics Journal # 250 (February, 2003 [Garo, June, 1968]):
http://www.sonnyliew.com/forums/viewtopic.php?p=660&sid=ae8cd46b3390e808990033b31c5f8c1
An older version is included in Concerned Theatre Japan (October, 1969):
http://www.umich.edu/~iinet/cjs/publications/michclassics/CTJ.html
Posted by Isabelinho at 12:10 PM

To clarify: the center image is Tsuge as portrayed by the actor Shirô Sano in Teruo Ishii's 1993 film Gensenkan Shujin, which is based on several stories of Tsuge's.

Hey C.: great info! Many thanks!

Isabelinho: I have now posted a segment from Ishii's film on my blog, if you are interested in viewing it.