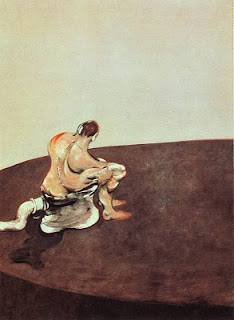 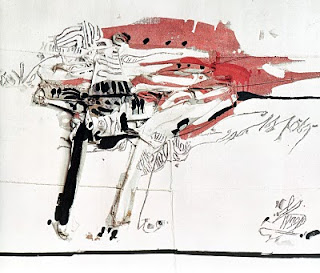 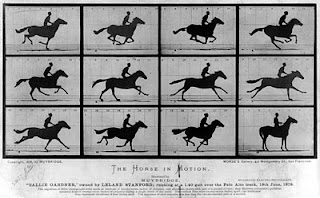 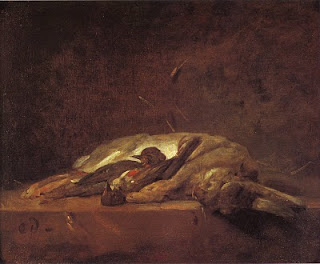 
Simply put, Francis Bacon's Triptych May - June 1973 is the best comic ever made. Not surprisingly it is not comical at all. To go on unsurprised, it was created by one of the best artists that ever lived. (We can't be surprised by our own convictions, or so it seems...)
My remark between brackets above is a bit self-ironic: not being an essentialist I have suspicions when things are too clear cut. We know how these things go: first we rationalize reality... afterwards we find that reality matches our rationalizations perfectly: big surprise. Anyway, it isn't because of this vicious loop that I'll stop believing what I said above. Irony just helps me to put things in perspective, that's all...
My views on art are very close to those defended by Francis Bacon himself. In an interview he said: "Abstract painting is a form of escaping the issue, because Abstract painting can never... even at its very best, can be never more than lyrical, charming, and decorative. It never, finally, unlocks, like great art can do, unlocks the valves of feeling by the... by this attempt to record the fact. When I... You see?, what any artist needs today is a profound technical imagination. It's a technique by which he can reset the trap in which the image he wants to record can be trapped again..." (1965).
Antoni Tàpies, Manolo Millares (but are they always Abstract painters?), and, possibly, Mark Rothko or Alberto Burri (but certainly not Wassily Kandinsky) remind me that Francis Bacon is wrong in his opinions about Abstract painting (I love the Informalists, obviously; plus, unlike Bacon, I don't exclude the "lyrical" from the great art's realm), but I'll use his words (adding "zany") to dismiss most, if not all, comics art in the babymen's canon. (A word for Feminist decorative art: it's a conceptual stance: the work is less important than the idea; Francis Bacon wouldn't approve this kind of art, I suppose, but I'm apparently more tolerant.)
Giles Deleuze explained Francis Bacon's art perfectly when he wrote (Francis Bacon, The Logic of Sensation, Continuum, 2003 [la Différence, 1981]; translation by Daniel W. Smith: 27): "The head-meat is a becoming animal of man." That's the fact Francis Bacon caught in his trap created with a profoundly imaginative technique: we are animals made of meat, and perishable meat at that.
Giles Deleuze said that what a philosopher does is to create concepts. A couple of them in Francis Bacon, The Logic of Sensation are very interesting to any serious comics scholar. The first one that I'll cite in this post is "chronochromatism" (Deleuze builds this concept over "chronophotography"). It describes how Bacon paints the bodies to indicate micro variations in time (he was very interested by Edweard Muybridge's chronophotographs). Bacon began his career influenced by Pablo Picasso and we can conclude that his art is a Cubo-Futurism with Expressionist clothes. The other concepts that I want to talk about can't be summed up in a word, so, I'll have to quote Giles Deleuze again (on the triptych format; ditto, 84, 85): "This then is the principle of the triptychs: the maximum unity of light and color for the maximum division of Figures. [...] Time is no longer in the chromaticism of bodies; it has become a monochromatic eternity. An immense space-time unites all things, but only by introducing between them the distances of a Sahara, the centuries of an aeon: the triptych and its separated panels. [...]
[T]he three canvases remain separated, but they are no longer isolated; and the frame or borders of a painting no longer refer to the limitative unity of each, but to the distributive unity of the three."
Deleuze also studied complex rhythms created by the forms in Bacon's triptychs. These reading beats are seldom explored by formalist comics scholars (from the top of my head I can only think of Renaud Chavanne's Edgar P. Jacobs & le secret de l'explosion; Edgar P. Jacobs and the secret of the explosion - PLG, 2005; but his primary texts, even if interesting, were a lot poorer, of course).
Triptych May - June 1973 (1973; see above) denies at least one thing in Giles Deleuze's quote above. A few instants only pass between the panels not "the distances of a Sahara, the centuries of an aeon." It represents George Dyer's suicide in 1971. To describe this tragic "comic" strip (I put the misnomer between inverted commas for obvious reasons) I'll quote Hugh Marlais Davies (Francis Bacon, Abbeville Press, 1986: 74, 75): "In Triptych, May-June, Bacon shows sequential views of a single figure, like stills from a film. He has reversed the conventional left-right progression and has, again as in a film, abandoned a fixed viewpoint. We look through one doorway in the left panel and through another in the center and right panels. Read from right to left, the images depict the facts of [George] Dyer's death, as the nude figure vomits into the bathroom sink, crosses the room, and then dies on the toilet. The sinuous, agonized curves of Dyer's arm and shoulder at right are continued by the curve of the sink's drainpipe. The pitiful, almost fetally positioned figure at left has a closed composure in opposition to the distended agony of the adjacent panels. The white arrows in the foreground of the side panels were added to counter the sensational character of the subject matter by inserting a mote of clinical objectivity."
Two comments about the above quote: since these are still images wouldn't it be more appropriate to mention comics instead of film?; not being a mind reader I bet that I'm not wrong if I claim that Hugh Davies would never mention the word "comics" in this context; the fetally positioned Dyer reminds me of one of my favorite (moving) paintings by Jean Baptiste Siméon Chardin (see above); it's the Eros / Thanatos (vanitas) theme again... Great art isn't that varied, I suppose...

Images:
1. Francis Bacon, Triptych May - June 1973, 1973; the shadow / Erinys leaving George Dyer's body in the second panel is particularly haunting; this avenging monster in ancient Greek mythology is coming to get the painter: it symbolizes his guilty conscience;
2. Francis Bacon, Three Figures in a Room, 1964 (triptych, detail: left panel): a premonitory portrait of George Dyer?; as I did for Nadine Spengler below: I wonder how he felt, seven years later, when his image became true?;
3. Manolo Millares' Antropofauna (anthropofauna, detail), 1970; in the same way as Ana Hatherly's characters, Millares' late paintings show figures that are partially made of language (the anthropos part?); wanting to contradict Francis Bacon I may be agreeing with him though: these tortured figures are hardly Abstract;
4. Edweard Muybridge's chronophoto The Horse in Motion, 1878;
5. Jean Baptiste Siméon Chardin's Un lapin, deux grives mortes et quelques brins de paille sur une table de pierre (a rabbit, two dead thrushes and a few wisps of straw on a stone table; c. 1750).

Posted by Isabelinho at 9:30 PM