Thierry Groensteen's Why Are Comics Still in Search of Cultural Legitimization? 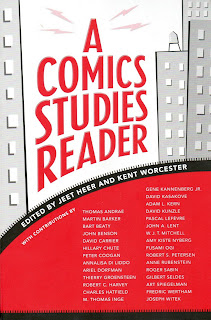 Why? Because of you and other critics like you, of course...
I'm reading Mississippi Press' A Comics Studies Reader (edited by Jeet Heer and Kent Worcester, 2009, believe it or not). The book's first essay gives this post its title (3 - 11). I had read it already a few years ago in Comics Culture (edited by Anne Magnussen and Hans-Christian Christiansen, Museum Tusculanum Press, 2000: 29 - 41). I also read Thierry Groensteen's book La bande dessinée, un object culturel non identifié (comics, an unidentified cultural object; l'An 2, 2006) in which part of this ubiquitous text is integrated in the first chapter: "Une histoire faite d'anomalies" (a history constructed by anomalies: 6 - 19). I'm not writing a critique or a review of said essay and cited book though. I'm just writing my two cents about a few phrases and various name droppings that Groensteen tosses to and fro. I'll start by the bombastic beginning (translation by Shirley Smolderen; 3): "Although comics have been in existence for over a century and a half, they suffer from a considerable lack of legitimacy.
To those who know and love it, the art that has given us Rodolphe Töpffer and Wilhelm Busch, Hergé and Tardi, Winsor McCay and George Herriman, Barks and Gottfredson, Franquin and Moebius, Segar and Spiegelman, Gotlib and Brétecher, Crumb and Mattotti, Hugo Pratt and Alberto Breccia, not to mention The Spirit, Peanuts or Asterix... in short, comic art, has nothing left to prove." Really? Is he serious? I find the notion of someone "loving" an art form somewhat strange. Do we love music?, all music compositions? Or painting?, all paintings? I don't think so. Anyway, picture this paraphrase, please: To those who know and love it, the art that has given us Jonathan Swift and the brothers Grimm, L. Frank Baum and Eric Flint, Enid Blyton and Astrid Lindgren, Roald Dahl and Leo Lionni, Sharon Creech and Laura Numeroff, James Thurber and Helen Epstein, Cavanna and Gerd Brantenberg, Charles Bukowski and Italo Calvino, Robert Louis Stevenson and Jorge Luis Borges, not to mention Rudolph the Red-Nosed Reindeer, The Story of Tracy Beaker or Chroniques de la haine ordinaire... in short, literature, has nothing left to prove.
Some of the above writers are part of any literary canon, I suppose, but where are the real heavyweights like Dostoyevsky, Ogai Mori, Constantine Cavafy? And aren't satirists and children's writers, I don't know?, somewhat overrepresented?
If comics have nothing to prove after this list I would say that the critic has not very high standards. In the end, my point is: what if people have their legitimate reasons to dismiss comics as high art, legitimizing it in the process as Thierry Groensteen seems to want? They are not familiar with the art form's best work in the restrict field (Fabrice Neaud's journals, for instance) because no one champions the stuff. On top of that they don't recognize some great work done in the expanded field as comics.
Another part of Groensteen's text that I have some trouble understanding is his use of the word "great," here (translation by Shirley Smolderen, again; 4): "the great American series (Brick Bradford, Flash Gordon, Mandrake, Popeye, and so many others)." Maybe he has a very loose meaning for the word. These are formulaic, escapist, stories if ever I saw such things, but I'm not going to criticize them (not wanting to engage with the stuff at this point in my life; I'll just add that Popeye's zaniness should have put said series in better company, but, oh well...). I made my point, anyway... methinks...
The icing on the cake has to be the ending though (ditto; 11): "Yes, why not admit it? All of us here in Copenhagen, delivering our clever papers, are probably doing nothing more than holding our hands to the kids we used to be." Gracious! I'm glad that I wasn't there delivering "clever papers" about dumb comics, "holding [my] hands" to the dumb kid that I used to be. I can't sing a victory song just yet though: maybe this largely expanded Peter Pan's syndrome pandemic is contagious and I'll catch it... eventually? Beware of the babymen out there...

Image:
A Comics Studies Reader (Edited by Jeet Heer and Kent Worcester, University Press of Mississippi, 2009; cover by Seth or by some anonymous person ripping him off).

PS On the brighter side of things (for me at least) in the Thank You department: Derik Badman, Joe McCulloch, Chris Mautner, Larry Cruz, James Bucky Carter, David Soares, Steve Holland, Jorge, German.