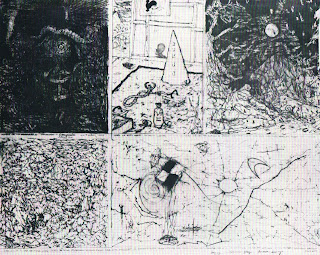 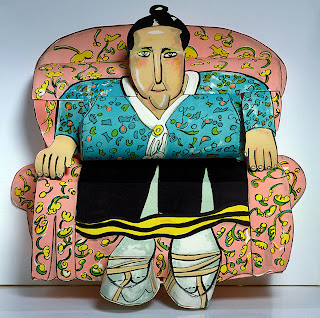 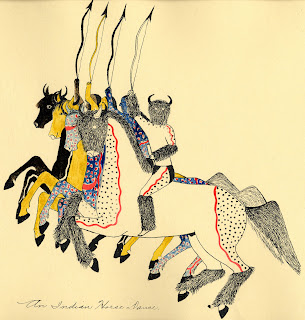 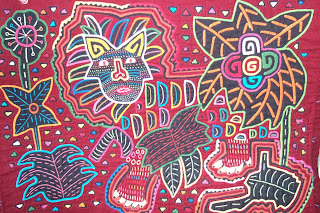 6.
Funk art isn't exactly my most admired art style. Being Francis Bacon my favorite 20th century artist (as recently seen) it's a bit strange that I favor Roy de Forest's work (and Gary Panter's, and Mat Brinkman's, and Brian Chippendale's). That's all true, but all things considered I don't have much choice: Funk (not Pop, which is just Neodadaism) is the obvious place where low / high art meets the lowly mass comic art. Besides, Funk is lively and, believe it or not, can also be pretty serious and deep. The proof?: not being exactly Funk, New Image painter Nicholas Africano's "autobiographical figural psychodramas" (as Arden Reed described them in Art in America, December 1999: http://findarticles.com/p/articles/mi_m1248/is_/ai_58361009) are close enough to Francis Bacon's own obsessions...
Repeating Modernism's fascination with non-Western forms of art (Pablo Picasso admired African art and Francis Poulenc was inspired by the Indonesian Gamelan) these artists (Funk and surroundings, I mean...) pioneered a reivindication of previously discriminated social groups: popular decorative art, traditionally created by women; stupid, urban, bad, popular art; the art of American Indians (and Roy de Forest is the right artist to cite here, even if his characters are cartoonish...); narrative art (scorned by the Modernists), and the inevitable, mass produced, non-arts of caricature (Red Grooms) and comics...
A Journey To The Far Canine Range And The Unexplored Territory Beyond Terrier Pass by Roy de Forest (Bedford Arts, 1988) is an accordion fold book spanning eleven double-page spreads and two single pages. It records the peripatetic adventures of a "renowned grey-haired sage [a figure that Roy de Forest calls "Leonardo da Vinci"] and his loyal companion, a spotted, red-faced sheep dog" (as the artist described his characters at the end of the book). In the same page Stephen Vincent "reads" the story (and informs us that these images were inspired by a de Forest "one-week spring vacation with his family in Yosemite."): "Gradually we are introduced to diverse figures from Western mythology. Big Foot, the Indian, human spirits (à la Dante) stuck inside trees, anthropomorphic mountain shapes, and a host of haunted wolves, dogs and natural emanations will each alert our nervous systems that larger forces do accompany us on this latter day comedic journey into unknown territory."
Roy de Forest's graphic resources are remarkably varied. His textures, dots and lines, make visible what's invisible, as Paul Klee wanted (The Thinking Eye, Wittenborn, 1961 [Das bildnerische Denken, Benno Schwabe & Co., 1956]: 76). I don't mean locus genii or such things I don't believe in though: I mean simple things like breathing, sending light rays (the sun), and seeing. On second thought, the genni aren't that bad an idea either: providing that we see them as figments of our imagination and, consequently, as byproducts of our feelings in a particular place (a religare). In that specific department, the spiritual one, I like how To The Far Canine Range And The Unexplored Territory Beyond Terrier Pass ends, a lot: the old sage becomes one with nature. As he does so, he sends eye rays in our direction breaking the fourth wall. I, for one, feel compelled to accept his invitation...

Images:
1., 2. Nicholas Africano, The Shadow [I beat this fucker up], 1979 (we can't beat ourselves, I suppose), and The scream, Struggling with him, He's afraid of loneliness, 1978 (sorry for the bad resolution);
3. a William T. Wiley comic, (Unmuzzled Ox, 1975; sorry also for the awful resolution);
4. Red Grooms, Gertrude [Stein], 1975;
5. Amos Bad Heart Buffalo's drawing as published in Hartley Burr Alexander's Sioux Indian Paintings, C. Szwedzicki, 1938 (image caught, here: http://www.lib.ucdavis.edu/ul/libcoll/harrison/books.php);
6. a mola (Kuna for "blouse," Panama).
PS I'm glad to see that film critics have a lot more sense than comics critics: http://rogerebert.suntimes.com/apps/pbcs.dll/article?AID=/20081223/REVIEWS/812239987. (On the other hand, I have my doubts because Ebert wrote these incredibly obtuse couple of phrases: "Frank Miller, whose 300 and Sin City showed a similar elevation of the graphic novel into fantastical style shows. But they had characters, stories, a sense of fun.") I especially liked this bit: "To call the characters cardboard is to insult a useful packing material." He he... I'm still laughing out loud... And in case you're wondering: yes, I would apply the same phrase to Will Eisner's Spirit (another hugely overrated character of the heavy paper stock persuasion).
Posted by Isabelinho at 6:13 PM

Domingos - I remember you from long ago on the CJ board. This is a nice blog you have here. I'd like to send a mini I just made to you. You might enjoy it. Check out my blog at www.discretefunk.com, if you get a chance, and maybe e-mail me if you'd like a free mini.

Hey Jason!
Thanks a lot! I visited your blog and I found your art pretty impressive. Thanks also for your offer. I'll get in touch.

Thank you! The wife and I are pretty bowled over by her!