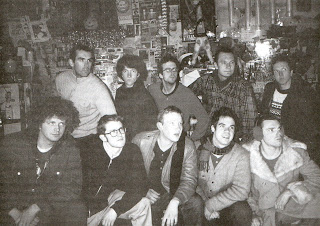 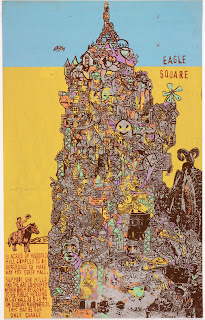 2.
3.
Fort Thunder was a group of Rhode Island School of Design students living in the second floor of an abandoned 19th century textile factory in Eagle Square, Olneyville. They occupied the place from 1995 through 2001 when the whole premises were demolished. According to Tom Spurgeon (here: http://www.comicsreporter.com/index.php/briefings/commentary/1863/):
"The name "Fort Thunder" was selected by the quartet [Mat Brinkman, Brian Chippendale, Rob Coggeshal, Freddy Jones] almost immediately upon moving in, as the space needed a name in order to advertise its music shows. (Brinkman says its first show was held within a month after opening.) The name is related to the fact that the space, on the outer edge of a sparsely populated neighborhood near downtown, allowed the music to be played as loudly as they wanted. Brinkman also liked the idea of a Fort where "you're there to defend yourself from the quietness of American bullshit.""
Many artists joined the original four (most notably: Brian Ralph, Leif Goldberg, Jim Drain, Paul Lyons) or were influenced by the group's funk aesthetics (Paper Rad - Jacob Ciocci, Jessica Ciocci, Ben Jones -, Sammy Harkham, C. F.:Chris Forgues, being the most obvious examples).
Appart from comics, music, installations (that's what the place really was) and posters were the Fort's forte. Two examples: Drum & bass noise-rock band Lightning Bolt (Brian Chippendale, drums and vocals, Brian Gibson, bass: http://www.myspace.com/laserbeast; http://laserbeast.com/); arts collective, noise band, Forcefield (Matt Brinkman, Jim Drain, Ara Peterson, Leif Goldberg) who showed their installation Third Annual Roggaboggas at the Whitney Biennial in 2002. Jim Drain, as a solo artist, won Basel's Art Fair's award in 2005: http://www.boston.com/ae/theater_arts/articles/2005/06/26/knitting_his_way_to_the_top/.
But enough with history. What's Fort Thunder, really? If I had to define it with one word it would be: noise. It gave the name to the artists' group and noise-rock was played there. But is there such a thing as visual noise? Yes, there is: in information theory (Shannon-Weaver model) noise is everything that distorts the transmission of information. (Instead of simply saying "noise" I should have used the more accurate expression "semantic noise", though.) This means that Fort Thunder is some sort of Dada (Kurt Schwitters' Merzbau is the grandfather of the Fort), Funk (Jim Nutt et al - I personally have a soft spot for Roy de Forest and Nicholas Africano), Punk (Gary Panter comes to mind), aesthetic. Not to mention Art Brut, New Image, Figuration Libre, etc... etc...
Nothing new under the sun? It depends: no one cited above invested in comics as the Fort Thunder artists did (except Panter, of course); they brought their generations' imagery (the eighties' video games and other cultural detritus) to the forefront.
Teratoid Eights (Highwater Books, July 2003) is an handsome little tome that reprints Mat Brinkman's remarkable mini-comics. He depicts simple, rocky, slightly menacing, alien worlds populated by goofy monsters. Even if brief, Mat Brinkman's stories contradict the idea that Fort Thunder comics are visual noise only. His ratty line and simple creatures transport us to a primitive world. His imagery may be too playful to truly haunt us, but it is enough to rouse deeply buried feelings, hiding in our primitive brain.
Images and sounds:
1. the Fort holders in a group photo as published in The Comics Journal # 256 (October 2003: 61): top row, left to right: Jim Drain, Leif Goldberg, Rob Coggeshal, Peter Fuller, Mat Brinkman; bottom row, left to right: Andy Estep, Paul Lyons, Eric Talley, Brian Ralph, Brian Chippendale;
2. Brian Chippendale's poster advertising a meeting to discuss the Fort's headquarters' future (the building was known as the Valley Worsted mill and the Americana Flea Market); image caught, here:
http://www.comicsreporter.com/index.php/briefings/commentary/5547/;
3. Paper Rad's psychedelic, Fort Thunder inspired, DVD trailer (2006).
Posted by Isabelinho at 3:52 AM

good comprehensive piece, thanks, haven't seen any new brinkman comics in forever, where's that guy at?

Thanks, you're welcome!
You will find Mat's last book, here:
http://www.mpawson.demon.co.uk/dernier.html

It's a good read. I've never read his comics and probably never will get to. Bits I've read are endlessly inspiring. Old blogs about good stuff are the best.