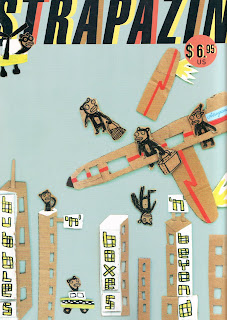 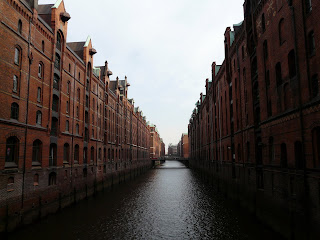 
When I cited notable magazines in various countries a couple of posts ago I forgot at least three: Le cheval sans tête (France, 1994), Mano (Italy, 1996; an awesome year for comics), Strapazin (Switzerland, 1984; language: standard German). It was in Strapazin that Martin tom Dieck published a "story four hands" with Atak (Hans-Georg Barber): "Difficult Mitgift" (difficult dowry; Strapazin # 50, March, 1998), republished "Fragments Fugitifs" (fugitive fragments; Strapazin # 56, September, 1999) and two parts of his story "La FM:" (2) and (3): # 73, 75 (December, 2003 [Satélite Internacional # 3, May, 2003]; June 2004 [Beaux Arts Magazine, BD hors série: 32 bandes dessinées inédites pour 2004, 2003]). As the radio receiver receives sound signals Martin tom Dieck's FM "receives" the 20th century history signals (the theme of Comix 2000 - L'association, 1999 - in which "La FM" - 1 - was published for the first time).
In the intro to the very important exhibition Mutanten (October, 24, 1999 - January, 9, 2000), Christian Gasser (http://www.dorgathen.org/mutanten/info.htm) acknowledges Strapazin's importance after saying that Germany and other German language countries don't have much of a comics tradition to speak of (Wilhelm Busch and Lyonel Feininger notwithstanding): "Without exaggeration, it is possible to say that while comics have always enjoyed great popularity in Germany, there were never any authentically German comics or comic artists for the most part of this century - with the exception of a few lone fighters such as Matthias Schultheiss and Gerhard Seyfried. As a result, German comic fans had to read material licensed from the U.S., France or Italy. In the Nineties, however, things certainly seem to have changed. Helped along by publications such as Strapazin (an independent comic magazine first published in 1984), a young generation of German and Swiss comic artists has emerged from nowhere. People from the DDR (the former East Germany, where there were virtually no comics except ideologically correct ''funnies''), such as Anke Feuchtenberger, Atak, Holger Fickelscherer, Christian Huth, Henning Wagenbreth; people from West Germany, such as Hendrik Dorgathen, Martin tom Dieck, Markus Huber, Jim Avignon; people from Switzerland, such as Thomas Ott, M.S. Bastian, Anna Sommer, Christian Farner - all have developed individual graphic and narrative styles."
Martin tom Dieck explores images as Jazz musicians explore sounds or Dada and Surrealist poets explored words: he improvises with pictures (one of his favorite comics is Moebius' Le garage hermétique de Jerry Cornelius; the airtight garage of Jerry Cornelius, Métal hurlant # 6 - 41, 1976 - 1980). As Martin told me in an email ages ago (January, 14, 2003) he likes the idea that the story is not finished when he finishes it, permitting many versions imagined by the readers. Even so I would like to distinguish two leitmotifs that punctuate Martin's work: water and a city map that's also a heart. The latter two are present in his wordless story undert Ansichten der Speicherstadt (a hundred views of the warehouse district; Arrache Coeur, 1997), but water in its multifarious manifestations is all over Martin tom Dieck's oeuvre: cats and dogs raining, air bubbles, foam, waves, vortexes, tsunamis, cascades, light reflections on and in the liquid element... you name it... Water behaves in a way that's very Deleuzian and Zen: it's always the same and yet, it's always moving and it's always different; difference and repetition. Martin, by the way, did two books about Gilles Deleuze written by Jens Balzer: Salut Deleuze! (hi! Deleuze; Fréon, 1998; Neue Abenteuer des Unglaublichen Orpheus [the new adventures of the incredible Orpheus], published in the Berlin edition of the Frankfurter Allgemeine newspaper, 2001). The Speicherstadt of the title (inventing a wordplay in German: "the city of memories," as discussed in an email that Martin sent me dated February, 19, 2003) are Hamburg's, now disused, but still impressive, old dockland facilities (see image). With a little imagination we may very well see that, seen from above, the Speicherstadt has the form of an heart. Maybe that's where our most cherished memories come from, after all... But I'll let Martin tom Dieck the last words in this post. They're about hundert Ansichten der Speicherstadt's epigraph: (Zhuangzi: the whisper of the water speaks my thoughts; email to yours truly, February, 19, 2003): "what it speaks (for me) is less of an intellectual or rational conception like in a significant use of a metaphor, but more (as it comes from a Taoist) of that not centered but spread attention. Or in short terms, while it speaks of thinking it means not thinking."


Martin's site:
http://www.mtomdieck.net/
Martin tom Dieck's work on Countour's web page:
http://www.contours-art.de/de/artists/dieck/index.htm
Images:
1. Strapazin [# 59], special edition in English: it's the catalogue of the Bubbles 'n' Boxes 'n' Beyond! exhibition at the Swiss Institute in New York (June, 1 - August, 19, 2000) which included Swiss and American comics artists; the cover is by Nadine Spengler: I wonder how she felt, a year later, when her image became true?;
2. the Mutanten exhibition catalogue's cover (mutated, German language comics avant-garde of the nineties; Hatje Cantz Verlag, 1999; Düsseldorf, October, 29, 1999 - January, 9, 2000) with an image by Hendrik Dorgathen; design by Roli Fischbacher, Sabine Singenberger;
3. the Speicherstadt in Hamburg (image caught on the www: http://flickr.com/photos/fimbulfamb/2300988952/)
Posted by Isabelinho at 4:06 AM

Just for the record, in lieu of an automatic pingback: I cited your insightful post in my paper "Hamburg's warehouse district in Martin tom Dieck's hundert Ansichten der Speicherstadt" at http://publikationen.ub.uni-frankfurt.de/frontdoor/index/index/docId/23328