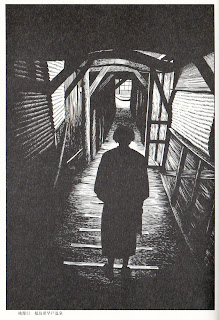 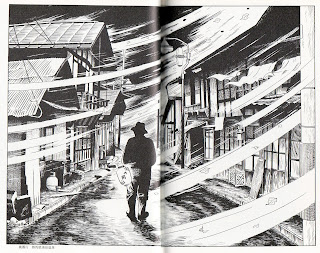 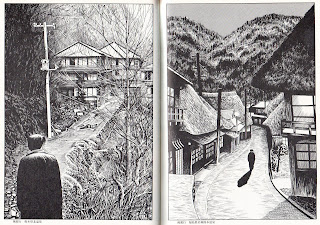 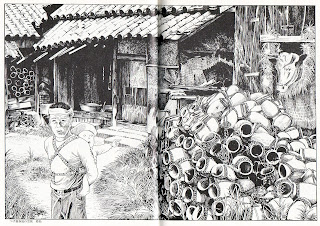 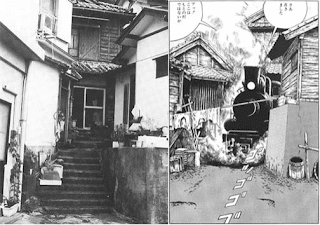 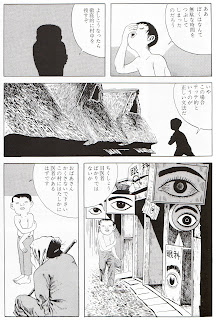 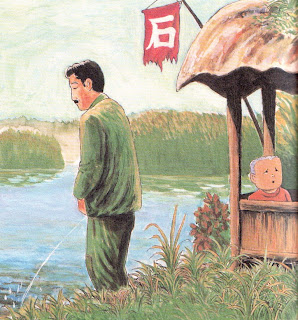 7.
Images:
1., 2., 3. a distinctive trademark in Yoshiharu Tsuge's work are these melancholic lonely characters, viewed from the back, lost in their thoughts and lost in the sometimes inhospitable landscape (remember Fred's Jules Renard?, kindred spirits?); here's what he said in an interview when asked about travelling (Susumu Gondô, interviewer, 1993 [quoted by Béatrice Maréchal: "On Top of the Mountain," The Comics Journal Special Edition, 2005: 26]: "It is not only to get free from daily life, it is also in the relationship with nature to become oneself a point in the landscape."; the above quote talks about pantheism and fits like a glove to image # 3, but the other two also have that unsettling Tsuge's touch: the mark of genius, I would say; disappearance (including suicide) is one of Tsuge's main themes;
4. another travel inspired illo;
5. the real location (transformed, after a couple of decades, I suppose) and its transposition in "Nejishiki" (Garo, June, 1968; image caught, here: http://www.mugendo-web.com/y_tsuge/);
6. a famous "Nejishiki" page as published in 9e art # 10 (April, 2004 [1968]);
7. Sukezô Sukegawa (with son) pisses in the Tama river while trying to sell ornamental stones (that's what's written: "stones)"; Yoshiharu Tsuge's autobio stories are always an invention (he aims at a more profound truth through creation); Sukezô is a misfit character who, among other things, tried to do comics just to discover that personal expression doesn't sell; sounds familiar? All images, except the ones already noted, are from Kusetsu juunenki (a period of ten years' unswerving devotion; Chikuma Shobô, 1994).
Posted by Isabelinho at 6:50 AM

I love Y. Tsuge's work so much.
"L'homme sans talent" (sorry, i only know the french title) is one of the best comic book i ever read.

Were does these pictures comes from ? Tsuge's work is so hard to find.

Very nice Blog, by the way.

Ditto and Thanks! These images come from the Japanese books that published all of Tsuge's work. I hope that someone publishes them in Europe or North America in a language that I can understand.