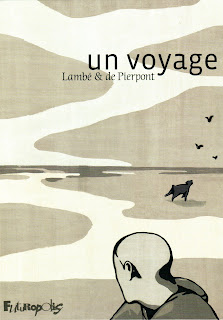 It was inevitable, sooner or later I had to write about comics criticism, or, to be more accurate, I had to write about what passes for comics criticism in the media. Why now, exactly, though? Because we're approaching the end of the year and "best of" lists tend to pop up here and there (preferably at the beginning of December to permit readers the joyful act of penning their gift lists for Christmas). Also, because Marcos Farrajota at Lisbon's Bedeteca (comics library) always asks me to examine the year in comics criticism (this time I'll just translate this post into Portuguese; neat!). Don't laugh, please, but doing such a thing, year after year, reporting nothing, is incredibly tough. Last, but not least, because I read this very finely written and, more importantly, very finely observed, piece of metacriticism by Xavier Guilbert at Du9 (in case you are wondering, the cryptic cypher and letters mean both, "about what's new" and "about comics," the ninth art, according to Claude Beylie - Lettres et médecins magazine, January 1964; in French): http://www.du9.org/Vues-Ephemeres-Decembre-2008
Especially for you, French language impaired people, I'll summarize what Xavier Guilbert says in one sentence: he compares the nominees in literature, film... and comics... for the Globes de Cristal yearly prizes (twelve categories given by the French press to the arts) concluding that the latter, are simply ridiculous. The "ridiculous" part is mine, by the way, but Xavier is a lot less naive than myself. He doesn't believe that the journalists (those who, according to the jury, are the best informed to judge) are aesthetically impaired: he simply noted that the holy elected are the biggest at the box-office. A coincidence, I'm sure...
To add a personal note: it always was with dismay that I used to stumble, while reading the cultural section of the newspaper, with an inane review about some mediocre French mainstream comic (i. e. a comic for children very much liked by babymen also) juxtaposed with real criticism about Paul Celan, for instance. Needless to say that I'm more than happy when, in these days of economical crisis we're living in, there's less and less space to waste with comics criticism in the newspapers. I prefer nothing to inanity.
Anyway, more than a year ago Sean T. Collins wrote an article in The Comics Reporter about the comics criticism panel at SPX 2007: http://www.comicsreporter.com/index.php/cr_first_person_sean_t_collins_on_the_criticism_panel_at_small_press_expo/
Here are a couple of quotes that may help to explain comics criticism's place in mainstream media: ""fewer words, more bullets, more lists, more entry points," tying reviews into the PR cycle for new releases to the exclusion of works that aren't new or upcoming, tight word counts, limited space for comics coverage" (the inverted commas mean that Collins is quoting Douglas Wolk); "I wish the phrase "the dumbing down of American culture" were removed from this discussion. A look at the top-grossing films and best-selling books during the so-called Golden Age of Criticism indicates that America has always been pretty dumb, a state of affairs not at all unique to America, hey by the way." PR is the mantis that kills criticism after using it for its personal pleasure. Newspapers have a tough time just keeping afloat these days. Dumbing down is, perhaps, a necessary strategy in order to survive. This pet theory of mine tells me that things never change... Collins is right: fortunes are made in these barbaric days we're living in, selling what's dumb, not what's difficult, challenges our preconceptions, confronts us with the real world. What he doesn't seem to acknowledge is that critics back then weren't tied to PRing what sells like they do today. If that doesn't happen to older, more established criticism fields, like literature, yet, I dread the day in which babymen critics will laud Harry Potter as the greatest book ever written.
Image:
If asked, I would elect this book as winner of the Globe de Cristal for comics (Un voyage by Philippe de Pierpont - w - and Éric Lambé - a -, Futuropolis, 2008).
PS This post has nothing to do with comics criticism in academia. I just received the latest International Journal of Comic Art and it's huge with 872 pages. I'm sure that I'm going to enjoy every one of them.
Posted by Isabelinho at 3:23 AM

Hi, Domingos. Liked your article, and I totally agree. I have quoted my favourite line of yours on my blog. P.S. My family is from Sao Miguel.

Hi Laroquod:
Thanks for quoting me!
I find it very hard to be analytical and write a lot (I could never write a book). On the contrary, I tend to be quite synthetic. Here're the short questions that were my contribution to the Dropping Knowledge project. I hope that you like them:

In a world dominated by realpolitik does real politics still make any sense? Isn’t economy (or, better yet: the production of profit for a tiny minority) the only driving force in the world today? Isn’t democracy a farce, then? Virtualpolitik?

How can people get any information that puts the powerful in a bad light from media owned by them?

How is it possible to create anything artistically valuable in the society of the spectacle?

PS It's a shame, but I've never been to the Açores.

Very interesting questions, Domingos, and ones that I have frequently asked myself (particularly about how to pierce art through the spectacle). My thinking lately is that the awful, simple truth, is this: one-dimensional, essentially uninteresting concepts that can be grasped in 5 seconds or less are just the only ones that can pierce all the layers upons layers of cultural veils to get through to any appreciable number of people. I'm not entirely sure that it's a conspiracy or that anyone's particularly at fault, it's just a sad fact about human nature that is only getting worse with the online culture of immediacy and the idea that 'everything is so five minutes ago' in the crazy blog rat race. Your writings are in my RSS feed reader new, and I have been enjoying paging through your quotings and musings about some very interesting works of art. My 'list' is growing a lot this afternoon. Thank you! P.S. I was born in Toronto and have only been to the islands once, myself -- at the age of 14. One of the most beautiful places I've ever been.

Do mention Beylie's article in the January 1964 Lettres et médecins. Do you happen to have a complete citation (including page numbers) for that article? I'd like to try and get it through InterLibrary Loan, but they'll need a whole citation.

(In fact, if you have citations for his whole Jan-Sept series of articles, that would be great. Lots of people mention them, but no one seems to cite them!)

Any help would be greatly appreciated!
Thanks

The second issue in which the article appeared is March, 1964, by the way...