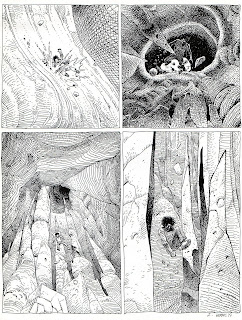 The only genre that I hate more than science fiction is sword and sorcery fantasy. It seems to me that it's pretty dumb to hate a whole genre, though. I can think of two reasons why this is so: 1) it all depends on what we mean when we say the word "genre" (genre paintings, for instance, are representations of scenes from everyday life; obviously, I would never be against that); 2) even if we have an essentialist view of a certain genre with a bad rep (and we belong to the maledicent choir) there's always the possibility that work x or work y "transcend the genre to which it belongs to" (a very talented film director, to put it mildly, Stanley Kubrick, built his whole career around this concept). The truth is that, from Philip Nowlan's Buck Rogers newspaper comics series to Alejandro Jodorowsky's and Moebius' Metal hurlant's "Incal" mini-series and beyond (the Metabarons Universe, for instance) science fiction in comics has been pretty mediocre. That's why the story "Approche Sur Centauri" (approaching Centauri) by Philippe Druillet and Jean Giraud / Moebius (Metal hurlant # 1; first quarter of 1975) is a surprising little gem.

In the early seventies French comics were living a small revolution. Bruno Lecigne explained what happened then (my translation): "[The comics milieu] witnessed many indelible phenomena being set in motion: readjustment (arbitrarily aimed at children for more than 50 years, comics conquered an adult public; the same public it was destined to in the first place); expansion (in its forms and themes); channeling (the adult market ends up being institutionalized; fixed in tendencies and reference spaces). It can't be doubted that the comics expansion outside of its traditional field before 1970 (culture consumed by children, that is) must be linked to the more general "counterculture" flight. It must be linked to the irruption of a culture at the margins of the establishment. A culture that also produced the massive success of rock [music] and science fiction. This means that the readjustment and the expansion of comics after 1968 are grounded in a series of misunderstandings - but that's another story." (Avanies et mascarade, 1981, Futuropolis: 7; it's not a coincidence that Metal hurlant was translated into English as Heavy Metal.)
I can't continue this tale as Bruno Lecigne would, of course, but, my interpretation of the misunderstanding he talks about lies in the immature nature of most of what was produced back then under the "adult" label. That's why I prefer to talk about a small revolution instead of a real one. To prove my point we just have to look at how easily the mainstream absorbed these innovations (conversely it still can't co-opt the Frémok). Bill Griffith sensed this problem in America as early as 1973: "Hey! I wanta know what's "underground" about rotting corpses! Besides buryin' 'em, huh? And inflated rubber women with bulbous, 48-inch chests? And all that half-baked, crackpot science fiction creeping onto the racks that was pathetic back in the '50s when it was at least new? [...] When an artist's central characters and/or protagonists are depicted as overly developed, seminude musclemen, or robots, or cute humanoids with beguiling eyes, the line between what's loosely defined as "the concerns of underground comix" and simple escapist fiction with, perhaps, a facade of "relevance" becomes more than hazy. It disappears entirely. And, aside from the explicit sex and the use of naughty words, it falls into the "above-ground" category with ease. Which is probably where it belongs and, most likely, will end up." (The Comics Journal # 157, March, 1993: 56 [San Francisco's Phoenix, early 1973].) Moebius' science fiction was very new at the time and helped to revolutionize film's conceptual design with Ridley Scott's Alien (1979) and David Lisberger's Tron (1982). (He didn't belong to EC Comics' cheesy tradition, which was what Bill Griffith was referring to when he mentioned science fiction.) Even so all the problems that we can detect in Richard Corben's "prepubescent" fiction (Bill Griffith: 57) also contaminate Moebius' so-called, adult science fiction tales.
Why is "Approche sur Centauri" great, then? Because it confronts our very advanced and rational, clean, technology (as seen in the first panel) with irrational monstrosities that lie in deep space (Philippe Druillet calls this wrong continuum "hyper space"; maybe we would call it "virtual reality" today?). In the end, this little tale explores the same mind regions as Alan Moore's and Eddie Campbell's From Hell.
"Approche sur Centauri" isn't in my canon, but it could be, perhaps? Anyway, the only Moebius' story that definitely belongs in there is "Cauchemar blanc" (white nightmare), L'Écho des savanes # 8 (June, 1974). But that, as Bruno Lecigne put it above, is another story...

Image:
eye candy:
Moebius' pseudo adult-comics: "Absoluten Calfeutrail" (La deviation, 1980, Les Humanoïdes Associés [Métal hurlant # 16, April 1977]).
PS Being a genre that I tend to dislike (mostly because it's riddled with escapism) I haven't read many science fiction comics (my opinion is, thus, not very well-grounded), but I included two stories in my canon that are part of said genre (both tainted by politics, though): I labirinti (labyrinths), by Guido Buzzelli, and El Eternauta (the Eternaut) by Héctor Germán Oesterheld and Francisco Solano López. I could also include HP by Alexis Kostandi and Guido Buzzelli.
Posted by Isabelinho at 6:48 AM

I agree with you on how much overblown the Metal Hurlant science-fiction is; most of it seems to serve only as eye candy, and the revolution seems only happened aesthetically. Yeah, its goergerous art, but neither do I get all the fuzz and "groundbreaking" of, say, Corben´s "Den".

As Moebius himself said once, sci-fi is about anything but "science" nor "fiction". Good sci-fi stuff is about any other genre barely disguised with futurism stuffed in. Personally, I love Alex Raymond "Flash Gordon" because is obvious that he was trying to compete with Foster´s "Prince Valiant" (I´ve found in Flash Gordon more references and similitude to Marco Polo than to Buck Rogers). I´m also fond of some of the old Weird Fiction tales from EC, but it´s mostly because the good rendered work of the likes of Al Williamson or Wally Wood. Or Wolverton´s tales wicht are solely created to cheap thrills. On the other side, I don´t know if Luc and Francois Schuiten´s "The Hollow Lands" series can be labeled as science fiction since it´s so aesthetically diferent to anything else. So, indeed, the Metal Hurlant revolution was aesthetical, at leas as sci-fi goes.

A very good sci-fi comic that nicely fits in the label while still being good and polically overarticulated, is Chaykin and Mignola´s "Ironwolf".

By the way,I know your blog isn´t titled Golden Age Comic Book Stories, but, when offering a bait like this one it would be nice if you posted the complete damn thing!

Hi Santiago: I said that my opinions weren't very well grounded because I usually don't read much science fiction. Your comment reminded me of a Spirit story: "Outer Space." I just read it to write this answer and the least that I can say is that it was a painful experience (I'm not Eisner's biggest fan, that's for sure, but this story was written by Jules Feiffer). Science fiction in mass art comics is almost always just the manichean adventure genre. Flash Gordon is another proof of what I'm saying (and so is Dan Dare: sci-fi for children). All these stories are ridiculously childish. So much for the "golden age!"
Thanks for the "Ironwolf" tip. I can't promise anything, but maybe I'll read it. As for Schuiten & Peeters, not interested, sorry...
What you say about aesthetics is too complex to answer in a quick note, sorry again. (It surely deserves a post though.)

Here's a coda to my first comment:
Jules Feiffer: "the whole idea of a space strip revolted me. I think I must have been in the army at the time. If I were in New York I think I would have resisted it - either talked him out of it or maybe quit, or whatever. Once I was in the Army I didn't care about the strip any more. It was just extra money, so I wrote what I had to." (Panels # 1, Summer 1979: 27).

Science fiction has become reality ... True in some cases that it is fantacy but that fantasy is usual creative genius... Back in the early 60's late 50's buck rogers was flying in a space ship ... Look now where space exploration has gone so far as the "outer limits " of our universe and far beyond. Teraforming was thought of as science fiction and now scientists believe tera forming could be successful on Mars - a rocket is lifting off today .. Its destination Mars ...and at one time Darwin was thought as a science fiction ....

Hi Barb: thanks for your comment! I remember seeing a phone coupled with a tv showing the caller in Flash Gordon :)