Can you imagine yourself in Kupe's lighthouse (that ideal comics library filled with books that don't exist in Dylan Horrocks' Hicksville)? I do sometimes, but, even if I wholeheartedly agree with Kupe's point of view (which is: "The official history of comics is a history of frustration. Of unrealised potential. Of artists who never got the chance to do that magnum opus. Of stories that never got told - or else they were bowdlerized by small-minded editors...") my particular lighthouse has a few books whose content does exist, but isn't available. Books like Santiago "Chago" Armada's Sa-lo-mon, or Rafael Fornés' Sabino, or James Edgar's and Tony Weare's Shannon Gunfighter or Isepinal the Apache, or Héctor Germán Oesterheld's and Francisco Solano López's Amapola Negra (Black Poppy), or Martin Vaughn-James' The Park... 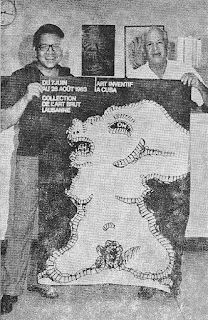 This is, of course, the editor and publisher in me. Since I'm neither I insisted several times with my good friend and micro publisher of Libri Impressi, Manuel Caldas, that he should publish Eduardo Teixeira Coelho's A Lei da Selva (the law of the jungle; a story in which no human appears). I imagined a fac-simile edition taken directly from old O Mosquito (the mosquito) editions.

It was Suat who indulged me and gave me the opportunity to be the European editor of his Rosetta # 2 (Thanks Suat! I grabbed the opportunity to choose Andrea Bruno, Edmond Baudoin, Anke Feuchtenberger, Martin tom Dieck, Max, Filipe Abranches, Jessica Khane (Isabel Carvalho) and Pedro Nora).

For Rosetta # 3 The Park by Martin Vaughn-James, a sequence of Olivier Deprez's Le Château, and L'interview (the interview) by Guido Buzzelli would be reprinted... Ditto a translation by Matt Madden of the whole of Aristophane's Les soeurs Zabîme (The Zabîme Sisters). (I hope that my faulty memory isn't playing me any tricks! I remember that Edmond Baudoin's Le portrait - the portrait - was also considered as a pièce de résistance of the issue.) Since Rosetta # 3 was never published the American public is very lucky that First Second grabbed the relay and published Aristophane's great (and sadly last) creation.

There's a real danger of mistaking The Zabîme Sisters for a children's book. Someone at Publisher's Weekly wrote (see the above link): "It’s a memorable and honest story that all young readers can enjoy." I don't doubt that for a second (pardon the pun): Marie Rose, Ella and Célina do what adolescent girls (Marie Rose, aka M'Rose seems a bit older) do in a summer vacation day: fooling around and enjoying themselves. But isn't this book way above, say, Hank Ketcham's Dennis the Menace or (even if I like its small town nostalgia and charm) Clare Briggs' Oh Skin-nay! The Days of Real Sport?

In the frontispiece Aristophane wrote (and I quote from Matt's translation): "This modest work is dedicated to the divine, to the oneness whose domain is everything and which can be found in each of us. A token of my devotion." There's no room for misinterpretations methinks: this is a religious book. I spoke many times against the colonization of the art form by children's literature and art, but what I really abhor is, as Kupe put it above, the bowdlerization of mainstream comics. I also don't believe that children have enough life experience to fully understand Aristophane's (or any other really great adult comics creators') subtleties and nuances. Sometimes the two readings are possible (e.g.: a few Carl Barks' duck stories), but most of the time that's not what happens: Manicheism is all over the place in the comics mainstream, as we all know... 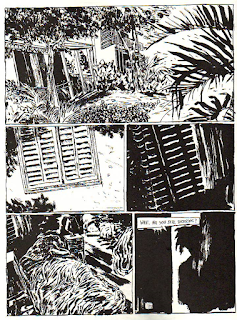 The establishing shot above also sets the tone of the book: in its second tier the same window is shown from the outside and from the inside. We can't hear it yet, but the narrator has a strong voice which explores the characters' inner feelings and thoughts. This is his or her first intervention (page 4): "Célina got up after making them beg her. She took particular pleasure in being pleaded with and in feeling indispensable." This is (and I'm following Pier Paolo Pasolini and Gilles Deleuze) the free indirect discourse that allows us to see beyond appearances. 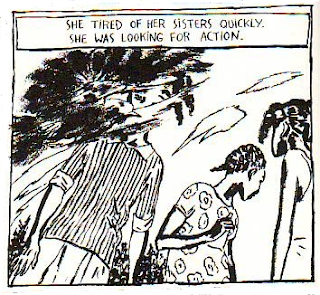 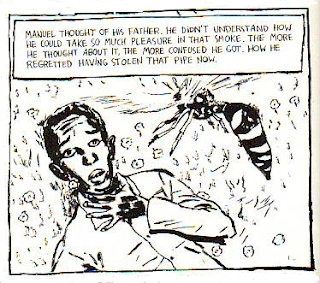 In the two panels above the bird and the bee may seem like senseless intrusions in the diegesis. What are they doing there? Is Aristophane just being clever or intriguing, or what?... 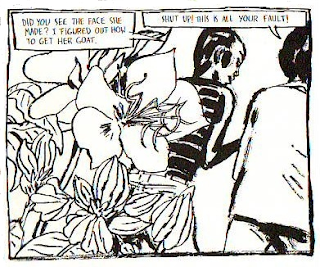 We just need to look at another example above to understand that: (1) Aristophane is telling us the surface of the events with what's being said in the speech balloons; (2) exploring the inner world of the characters through the narrator's voice over in the captions; (3) showing us something completely different and immersive with the images (it's the free indirect discourse of the ocularization): life is all around us. That's why his impressionistic (and fauvist) graphic style is so appropriate: we're one with Nature, even if we can't see it because we're immersed in our daily petty problems. In a word, Aristophane was a Pantheist. That's the Western religious position that approaches African Animism the most...

Even if pictures and dialogues work in two different voices, and this is sophisticated enough, what impressed me the most when I read The Zabîme Sisters for the first time was number two: how accurate and truthful the narrator is. I was so impressed at the time that, later, in another blog post, I compared Aristophane with greatness (i. e.: with Marcel Proust). Let's see a couple of such situations: 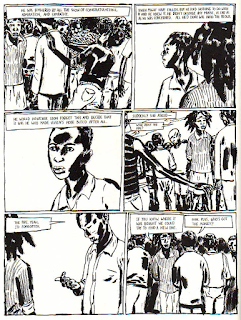 In the above page Manuel beat the town's bully Vivien and his reactions are mixed: on the one hand he feels disgust because Tito now fears him (coupled with this he thinks that he did nothing but dodge Vivien's blows; he's also disgusted by all the pats on the shoulder); on the other hand he's beginning to change slowly:  he's becoming arrogant. What we are witnessing is, unfortunately, a new bully in the making. Or, at least, the demonstration that praise is dangerous because we may believe in it... 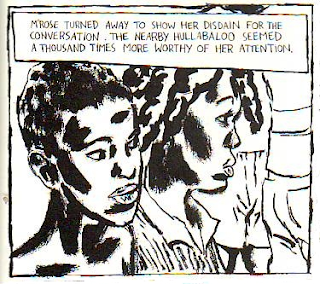 M'Rose is still mad with Tito because of a previous episode. Guy calls Tito to join him and M'Rose because Tito has an interesting story to tell about Vivien. I'm going to be completely subjective now (more subjective than usual, I mean): I found M'Rose's simple gesture of turning her head away from Tito, feigning disinterest, a very nice touch. A subtle gesture that, unfortunately, we don't see many times in the blunt world of the comics...

A final word to Nicholas Breutzman's lettering: it's a fine job, but Aristophane's letters are more irregular, more lifelike, more like his brush work: they stumble a lot more on each other... And Collen AF Venable's design: I don't hate it or anything, but her font choice, Escrita-Principal, coupled with the Caslon type reminds me of 18th century's Europe, which is all wrong for this story, of course. I also prefer the quiet dignity of Ego Comme X's original design to First Second's louder cover.

[A quick note: Manuel Caldas did publish A Lei da Selva. It's not a fac-simile, but it's a beautiful black & white edition. I speak about free indirect discourse above. Unfortunately I called it free *direct* discourse in my intro to the book. Oh, well!...
I feel that the above post is too short and doesn't do justice to this great book by the late Aristophane. Maybe I should come back to it?! We'll see...]
Posted by Isabelinho at 10:54 AM