When I think about German Expressionism the Isenheim Altarpiece (1506 -1515) by Matthias Grünewald comes quickly to my mind. I know it isn't exactly an Expressionist painting (I'm aware of the anachronism), but all expressionism (and some Surrealism too: Max Ernst, for instance) is there already.
One of the topics explored by Matthias Grünewald in his altarpiece is ergotism, as we can see in the polyptych's wing shown below: 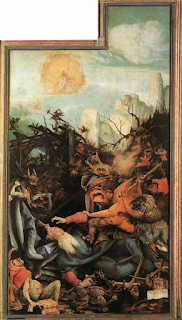 It represents Saint Anthony being harassed by demons, but if you look closely on the lower left corner of the painting you will see a patient afflicted with Saint Anthony's fire. This disease was caused by the ingestion of ergot infected rye and other cereals. Ergotism produces  seizures and hallucinations (hence the demons) as well as gangrene of the limbs and peeling. Ergotism also explains the strange look of Matthias Grünewald's Christ in the aforementioned altarpiece. There was a spiritual connexion between the son of God's suffering and the suffering of the diseased.
The depiction of human pain (often psychological pain instead of physical agony) isn't the only theme explored by Expressionist painters (and it certainly isn't this artistic movement's monopoly), but it certainly is an important part of the aforementioned style. Otto Dix remembered Matthias Grünewald and the polyptich form (a tryptich with a predella: a gallery comic) when he painted Trench Warfare, 1929 - 1932, his own version of human suffering in WWI: 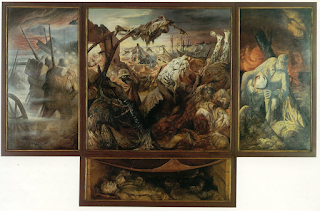 The religious connotation associated with Medieval and Renaissance retables was certainly intended (Otto Dix did many explicitly religious visual art during WW2 and after). We can find another religious connotation (but an ironic one this time) in another tryptych about WWI, the very mundane Metropolis, 1928:

In this great war painting  the true enemy, the higher classes, are enjoying themselves, but their faces show no joy (maybe they have a conscience, after all). Who else provokes wars, who else benefits from wars? Who else sacrifices the bodies of lower class people on the altars of Eros (the sex workers who were pushed to that situation because of a lack of protective men, killed in battle, of course,  in a male dominated society: women are marching in the right wing of the tryptych, as if they are also an army at the service of rich people - metonymically represented by the baroque architecture) and Thanatos (the WWI horribly crippled, pauper veterans no one in the upper classes gave a damn about)? The strange, "wrong," perspective is another of Dix's ambiguities (are we looking down, at the pavement and floor, as if looking into a microscope, assuming a moral position, or are we among the characters, watching the scene at their level?). We are compelled to choose, maybe?...
That's the pessimistic, looking back in anger, reading, but there's also a warning to the Weimar Republic (applied also later to the Third Reich): the times were changing... The wind of change was coming from North America and we can see two indications of the new Weltanschauung in Metropolis: black culture and the Charleston (the vitality of the New World burying the decadent old one as seen in the center panel); women's new found freedom. Women's more practical clothing and short hairstyles are indication enough that another North American icon was influencing German roaring twenties' society: the flapper (the neue frau). (With an unprecedented public role during the war women wanted to keep it in the post-war social order; It was during the Weimar Republic that women in Germany earned the right to vote, for instance.)
Post-War Otto Dix was an increasingly realist painter. He  was part of the Verists (a wing of the Neue Sachlichkeit; the New Objectivity). Dix was also persecuted by the Nazis: he was one of the painters shown in various anti-modern exhibitions:  Reflection of Degeneracy (1933), Degenerate Art (1937), for instance. His "war against war," (the title  of Ernst Friedrich's book of photographs Krieg dem Kriege, 1924) couldn't be well accepted by militarists.
Otto Dix put his great book Der Krieg in print in 1924 (Der Krieg is a cycle of twenty four offset plates published by art dealer Karl Nierendorf in Berlin - who also published a portfolio of fifty etchings - aquatint and drypoints). 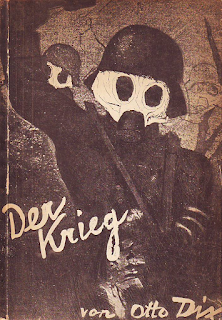 Der Krieg is a comic to yours truly because it is what I call, a locus (the totality of all points, satisfying a given condition; the locus, as applied to comics, is a third way between narration and description). There's a geographical connection, so to speak, instead of a more or less linear temporality. We have seen the locus in Seth's Clyde Fans, for instance (no one doubts that Seth is a comics artist, I guess...). There's a subtle difference between a simple description in a linear comic (a stanchion to support the action) and a description qua description and nothing else than a description: a locus (connecting the dots). (In Seth's case we could also mention the Deleuzian Cristal-Images.)
Der Krieg isn't a powerful political statement like Metropolis. It's an Expressionist work tinged by verism already. It was done in the early twenties, after all, not during the first decade of the incredibly violent 20th century. These are impressive images which speak volumes about destruction and sufferance, but not much about the predators who are responsible for such disasters. War is, after all (as Clausewitz put it), a quest for power (i.e.: politics) and it should be judged as such...
In Der Krieg we witness horror of various kinds and, maybe, that's the book's hidden political meaning. Why do we see these things and do nothing? Why do we still believe in fantasies that force us to kill each other? Why can't soldiers see that they're closer (in all aspects) to their enemies in the war field than they are from those who send them kill each other?
This is a long shot though... This is me overinterpreting and rambling... but I can't prevent myself from thinking that the shell-shocked soldier in plate nineteen ("Verwundeter Soldat:" wounded soldier; see below) is directly addressing me, the viewer: 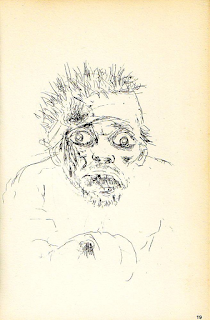 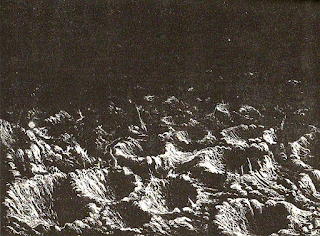 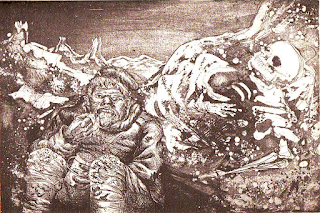 Or, the revival of one of the oldest visual sequences around: the dance of death ("Totentanz Anno 1917 auf Höhe Toter Mann:" dance of death year 1917 in Dead Man Heights): 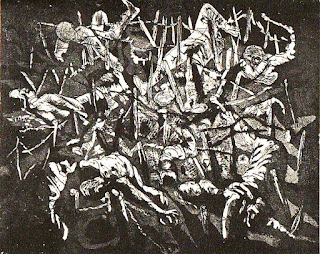 A grotesque image that loses some of its emo power because the bodies look more like puppets than anything else. On the other hand this dance of death is not exactly religious (but Dix's ambiguity between the sacred - the human condition - and the profane - the human contingency - is always present...). These are scarecrows, sock puppets (if you know what I mean), pawns sacrificed in a game of chess they were not playing...