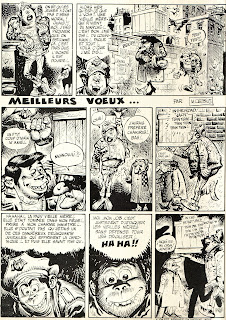 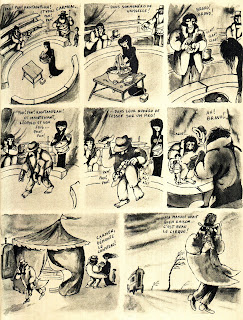 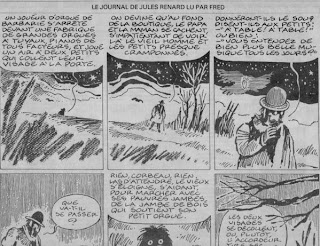 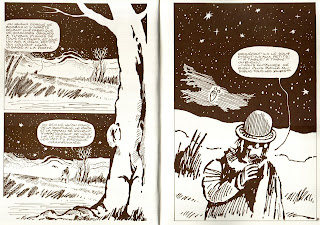 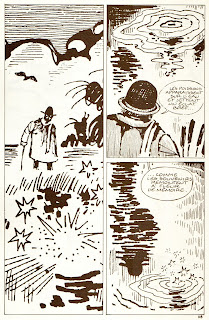 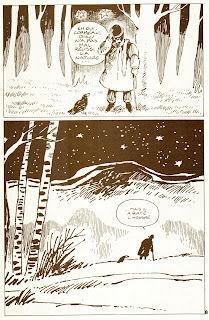 Images:
1. no, you're not seeing Will Elder's drawings and reading Harvey Kurtzman's words in Mad magazine... it's Jean Giraud (aka sacred cow Moebius) in Hara-Kiri # 35, January 1964 (the first Moebius signature appeared in issue # 28, May 1963);
2. the daily life circus in "Le petit cirque" (Hara-Kiri # 39, May, 1964);
3. first strip of page 27 as it was published in Le Matin de Paris (image caught, here: http://miiraslimake.over-blog.com/archive-11-27-2007.html);
4. the same strip is now a faked two pager in the Flammarion book (the panels of the verso page lost their continuity - in the newspaper they were a split panel - and the repetition is awkward; a tree was added to tidy things up, perhaps?);
5. Jules and Fred at their most poetic ("Fish appear above the water glittering briefly... / ...like recollections when they climb to our memory."): see what I mean?;
6. "Yes, crow, God didn't do badly when He created nature... / ...but He miscreated men." (My translations.)
PS In his blog La Cárcel de Papel Álvaro Pons says that a lot of my ideas are radical: http://www.lacarceldepapel.com/2008/11/03/luneros-nuff-said/. I'm not quite sure if I understand what he means (and I accept my radicality if he meant that I'm far away from the comics milieu's spectrum's center), but I've been accused of something similar before: João Miguel Tavares said that my statements are too definitive: http://www.bedeteca.com/index.php?pageID=recortes&recortesID=725. Matthias Wivel said the same thing: http://www.metabunker.dk/?p=1590#more-1590.
Two points: (1) I said that what I called "the cow herd" (the artists behind the comics milieu's children's comics canon) are great draughtsmen (no women in there, I suppose) and great storytellers; this doesn't seem too definitive and too radical to me; (2) if they're the sacred cows who worships them?, who doesn't accept a single criticism in these gods' direction? Aliena vitia in oculis habemus, a tergo nostra sunt, and all that?...
Posted by Isabelinho at 7:27 AM

I didn't say 'radical', I said 'categorical.' And I wouldn't want your criticism any other way :)

I think criticising the herd is all good, even if I find myself in disagreement.

One thing I think would be great, however, is if you wrote some criticism on some of these 'holy cows', explaining why you find them overrated and unnecessary. I think that could potentially be a really interesting contribution to the discourse on these artists.

It was Álvaro Pons who said "radical." Your challenge is interesting indeed, but I'm too busy posting about the stuff that I do care about. Maybe some other time, sorry.

I said 'radical' exactly in the way you describe: "far away from the comics milieu's spectrum's center". And it's not negative at all. I don't agree with certain of your opinions, but I think that The crib Sheet is a blog of mandatory reading. :)

Thank you Álvaro. Sorry if I'm being a bit defensive.