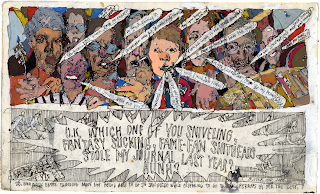 It's a well known rule: mediocrity perpetuates itself. While hacks are celebrated as "great artists" there's no money and fame to anybody else. This has two consequences: (1) the art form has no capacity to attract the real great artists; (2) it pushes away those incautious few who make the mistake of trying out the field (either that or they end up doing second rate work after very promising debuts). Barron Storey is a living proof of all this.
More details, here, in an article by Robert Wilonsky:
http://www.sfweekly.com/1996-01-17/news/barron-storey-s-life-is-an-open-comic-book/


I chose this telling quote on the above site:


"When Storey made his comics debut in 1993 with the publication of The Marat/Sade Journals, and then with the release of the completely autobiographical "The Adjustment of Sidney Deepscorn" in the first issue of the Dallas-produced comic anthology Tales From the Edge, Storey thought he would revolutionize comic art. His style - a blend of painting, drawing, and photography, so much text and narration flowing in and out of the dark and twisted images - looked like nothing in modern comics or the so-called graphic novels that emerged in the mid-'80s. Storey was convinced it would cause a furor within the industry.
But nothing happened. And when he followed it up with his epic "Slidehouse" series over the next year in Tales From the Edge, he imagined movies and dolls of the story's main character, Assassinada. He would make big money [I may be wrong, but I think that Wilonsky misreads "Slidehouse"'s last page, here]. But again, nothing, just the occasional "fanboy" who would show up at a comic book convention and tell him the art was "cool." Storey, who's already self-deprecating when he speaks about his art, was crushed."


I had a certain taste resistance to Barron Storey's art style. What totally sold me to his comics were the words: Storey is a great writer. In the below quote (from the same Wilonsky article) he shows how words are important to him and pretty much sums up my take on mainstream comics (remember: Storey said "crap," not I):
"Acknowledged as a master of commercial art, Storey has in recent years ventured into comic books - a field for which he holds contempt.
"A friend of mine, a former student, just sent me a comic that he did for Marvel, which I think is beautifully done," Storey says, presenting a copy of the brand-new Tales to Astonish featuring the Incredible Hulk.
"He called one day, and I told him, 'It's gorgeous. I'm so proud of you.' Then he asked what I thought of the story, and I told him I hadn't read it. It's stupid. I told him I could read any line from it at random and make the point."
Storey flips open the glossy book and reads the first line he sees: "'You have enraged my father beyond all imagining, creature, and you'll most surely die.' Or, 'Believe it or not, honey, when the dust settles you'll thank me for this.' That is crap, and I told my friend so."


Barron Storey's magnum opus are his journals. He sees them as a way to illustrate his life, as he puts it. I think that he's such a great writer mainly because he's brutally honest. Robert Wilonsky (in the link above) summarizes Storey's work beautifully: "Sidney Deepscorn is a poor disguise, hiding nothing - his anger with a comic book industry interested only in two-dimensional superheroes; repressed memories of a childhood spent running with "gun-toting idiots" who liked to shoot at the "niggers" in South Dallas; his conflicting feelings about his mother. Reading "Sidney Deepscorn," or most any of Storey's works, is voyeurism.
Storey fills the final page of "Sidney Deepscorn" with thousands of nearly unreadable words that actually divulge much about his past. He recounts the guilt he experienced when one of his friends bragged about shooting a black man in Dallas and Storey did nothing about it. He recounts his three bad marriages, how he talked the true love of his life out of getting an abortion, how the love of his life walked out on him."
I'll let you, for now, with another example of what I'm saying, even if not from one of Barron Storey's journal's (needless to say that I subscribe to every word... but one: I couldn't read it):


"Take a note: what you are looking at. but are you?
was created throughout in drawings. I point this [...]
this paraphrase of Bertolt Brecht’s Song of
the Cut-Priced Poets to ask again the question of his
poem of nearly 70 years ago: why won’t you pay?
Have you forgot what drawings look like? We try
to offer you something to look at that will remind
you of drawings that are not knocked out, though[t]
that has not been simplified and stories that are
derived from experiences that occurred in life. Why
then have you abandoned our market? Tell me:
has nothing in our work struck you? We tried to
speak to you in the language you seem to admire
even though you persist in overrating that lan-
guage and the practitioners thereof. And yet no-
one speaks truths any more in that language &
no one does drawings that cannot be done easily.
And no one ever thinks of doing stories that ask
questions that cannot be answered by displays
of will of force. That’s the pass you have brought
things to. You won’t pay - even though you have
become more affluent - or so we’re told. When I
began Slidehouse I wanted it to be excellent
all through. But. That’s too hard. Who will pay
me? This will just have to do.

Sorry if I spit the first and most obvious thought that comes to mind: sure, Storey never got the recognition, but surely it must have been much more frustrating having the likes of Dave Mckean and Bill Sienkiewicz cashing on it (and in the superhero genre, by the way).

Hi Santiago:
as far as I know, when asked, Barron Storey always says that he's proud of his students and of those, like Dave McKean, who weren't his students, but were influenced by him. Plus: let's not forget Peter Kuper who did autobio for Fantagraphics and edited WW3 (with another of Storey's students: Seth Tobocman) before being famous for _Mad_'s "Spy vs. Spy."
Sorry, but I don't agree with what you say. I can't really speak for him, but I suppose that Barron Storey was really frustrated (or I'm projecting my own feelings, here, who knows?) by the lack of sophisticated readers in the comics market. "Refried Eyes" is particularly telling: the father is the perfect reader, the son is the only reader that Barron Storey feels he's getting.

Yes, I think I was out of place in the way I made my argument, and probably its also my own projection.

But the fact that Dave Mckean (well, complemented with the writing of an unknown and unpcoming Neil Gaiman, tough he became famous on the Morrison scripted Batman gig)found "sophisticated readers" and Storey didn´t seems very arbitrary, considering early Mckean work is almost an emulation from Storey´s. Of course, most of Mckean´s work is worth on it´s own merit, but if those earlier works , from Violent Cases to Black Orchid got him a lot of attention and praise for his fine avant garde art aproach, it´s kind of odd that Storey´s didnt.

Who knows? Maybe the diference was PR or a good agent.Maybe some artists are dommed to be known well into posterity, if so.

By the way, somehow your post on Oesterheld and Pratt comes to mind...

Hi guys, just wanted to inform you that the society of illustrators in NY will host a show dedicated to Barron's journals this June.

There will also be a new edition of "Life After Black" available at a reduced price.

Unfortunately the re-edition of Marat Sade will only be ready by fall.

Just wanted to inform you that the society of illustrators in NY will host a show dedicated to Barron's journals in june.

There will be a second edition of "Life After Black" available at reduced prices.

Unfortunately, the re-edition of Marat Sade will only be ready in fall 2009

Way late here but Storrey's work was published by, what seemed to me at the time, a basic unknown with distribution that seemed a bit shaky at such a small size it was nearly impossible to read the words. Also, comics seem to reward those that plug away for 5 years. Very few get a big audience right off the bat unless of course they draw an issue of the Hulk.

You're right. Look for Carl Wyckaert's books. They're worth every schekel.

"When Storey made his comics debut in 1993 with the publication of The Marat/Sade Journals,..."

Just a comment- I'm not sure when Storey started doing comics, but it was much earlier than 1993. He did do a story that appeared in World War 3 Illustrated #2 (circa 1981). Unfortunately, a good checklist is nowhere to be found on the web at this point in time, as far as I can tell.

It's a shame that he got discouraged from the lack of reaction from the comic book store audience. Needless to say, it's not exactly an audience one should put any attention to. One hopes "Sidney Deepscorn" and his other stories will be collected. You'd think one of the European publishers would jump on that in a heartbeat.

Ooops! Thanks for the correction. I think that that WW3 story is around here somewhere (I should have checked the publication dates). There's a kind of divorce between comics markets: I mean the US, Europe (mainly France and Belgium), and Japan, I suppose. My best bet would be some American boutique publishers, but I don't see Storey fitting in anyone's editorial policy right now, unfortunately.