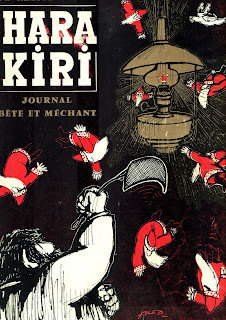 Too many times have I read the historically misguided version that juvenile Pilote was the first adult comics magazine published in France. This is wrong for three reasons: (1) youth is not adulthood; (2) there were, during the 19th century and early 20th, adult comics magazines like L'assiette au beurre; (3) even if we dismiss those old grandfathers there was Hara-Kiri.
Hara-Kiri was a satire magazine, in the vein of Mad, created by Georges Bernier (alias Professor Choron; the mag was situated at 4, Choron Street, Paris, France), François Cavanna and Fred. The early artists where: Jean Cabut (aka Cabu), Roland Topor (the Panic draftsman), Georges Wolinski, Georges Blondeaux (Gébé), Jean-Marc Reiser. It was in the pages of Hara-Kiri that Jean Giraud created his nom de plume, Moebius, while ripping off Will Elder and Harvey Kurtzman. Hara-Kiri's first issue was dated September 1960. Satirizing everything in French life (politics included) Hara-Kiri was the true heir of L'assiette au beurre. The mag's targets were the same old authority figures: organized religion, the police, the army... But also the more modern worlds of advertising, mass culture, sexploitation (Hara-Kiri ridiculed them all). In 1961 and 1966 the mag fell victim of censorship legislation (law 49-956, 16 July 1949, modified December 23, 1958). The above infos, by Stéphane Mazurier, can be found, here (in French): http://www.harakiri-choron.com/articles.php?lng=fr&pg=109 It is ironic, on retrospect, that this law, supposedly destined to protect children and teens, was applied to the first adult comics publication in France after what I call, the half a century children's comics debacle.

Fred (Othon Aristidès) did a lot of cartoons and covers for Hara-Kiri magazine, but apparently he was a kind person among the evil beasts (the magazine's subtitle was: journal bête et méchant: the evil beast journal). If we search info about him on the internet we'll see that the word more associated with his name is "poetic." His masterpiece in Hara-Kiri was "Le petit cirque" (# 38, April 1964 - # 64, June 1966). Le petit cirque is a series of surreal two-pagers (the first episode had three) published in 1973 as an album by Dargaud. It is indeed an absurdist and poetic work, but that's just a superficial reading. In the series' second episode (Hara-Kiri # 39, May 1964) the little circus (just a Gypsy family: father Léopold, mother Carmen, their son - they just call him "petit", little one) performs for the first and only time. In this "monde à l'envers" (the world upside down) their performance is just Carmen hand-washing clothes and Léopold bending his son over his knee and spanking him. Everyday life is fantastic, but a circus performance is quite prosaic. Reading between the lines we can see how sexist Léopold mistreats his submissive wife or how difficult the family's relations with bigoted peasants are.
What one almost can't find on the internet are people praising Le journal de Jules Renard lu par Fred (Le Matin de Paris, 1983; graphic novel: Flammarion, 1988) as Fred's absolute masterpiece. Jules Renard's words are wonderful, of course (few comics scriptwriters, if any, could write at that level), but a slow pace and Fred's landscapes (the leafless trees, the tormented clouds, for instance) add a marvelous melancholic mood to what's being said. The little bent lonely figure of Jules Renard, lost in his thoughts, lost in the scenery is, to me at least, absolutely unforgettable. The crow, à la Ucellaci e ucellini by Pier Paolo Pasolini, is just a bonus...

Image:
Hara-Kiri # 23 (December, 1962): cover by Fred.
PS After Art Spiegelman's success with Maus huge mainstream publishing house Flammarion decided to try a graphic novel collection. Le journal de Jules Renard lu par Fred was one of their choices and I thank them for that. But... (and this is a big one) in order to accommodate the newspaper Le Matin de Paris' pages to Maus' format they created some faked images. It's obvious that my canon is the kiss of death at the box-office (I'm very proud of that fact, actually), but, this time, I which someone would publish the original version.
PPS I didn't mention Philémon...
PPPS Thanks a lot for your PR Lídia!... Thanks also to Álvaro Pons, who mentioned The Crib on his blog La Cárcel de Papel: http://www.lacarceldepapel.com/
Posted by Isabelinho at 12:12 AM