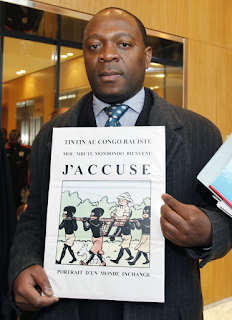 In July 2007 David Enright was at a Borders bookshop in the UK with his wife and two children when he stumbled upon a copy of Tintin in the Congo by Belgian comics artist George Remi (aka Hergé). The couple couldn't believe their eyes: was this filth at children's reach? Worst: was it addressed to them? Here's what he said:


"So you are married to a monkey and have two little yard apes. Good job. Got bananas?" This is one of the letters and emails that my Ghanaian wife and I received, when we asked that the Hergé book Tintin in the Congo be removed from the children's sections of bookshops back in 2007.

According to The Telegraph (July 12, 2007), after being contacted by Enright a spokesman for the CRE (Commission for Racial Equality), said:


This book contains imagery and words of hideous racial prejudice, where the 'savage natives' look like monkeys and talk like imbeciles.
It beggars belief that in this day and age Borders would think it acceptable to sell and display Tintin In The Congo. High street shops, and indeed any shops, ought to think very carefully about whether they ought to be selling and displaying it.

That same month, on July 27, 2007, a Congolese citizen living in Belgium (see above), Bienvenu Mbutu Mondondo, read an Enright related article in a newspaper and decided to act filing suit in a Belgian court against Tintin's copyright holder, Moulinsart Foundation. After patiently waiting for three years Mondondo, now supported by a French anti-racist organization (CRAN: Conseil représentatif des associations noires - representative council of black associations), extended his suit against Tintin in the Congo's publisher, Casterman. The suit was also filed in France.
Mondondo and the CRAN wanted Moulinsart and Casterman to ban the book or, as an alternative, if the first plaint failed, they wanted a warning to be put on the cover of future editions as well as a foreword inside explaining the colonial context in which the book was created (basically they wanted the French-Belgian editions to follow the British Egmont edition). On February 10, 2012, the Brussels Court of First Instance rejected the applicants’ claims. The same thing happened at the Brussels Appellate Court last December 5.
Here are some of the court's allegations:


If we were to follow the appellants, for whom it would suffice to take into account the simple intent of publishing a book, that would require banning today, for instance, the publication of some of the works of Voltaire, whose racism, notably toward Blacks and Jews, was inherent to his thought, as well as whole segments of literature, which cannot be accepted [as] the passage of time must be taken into account. Hergé limited himself to producing a work of fiction with the sole objective of entertaining his readers. He carries out therein candid and gentle humor.
It is above all a testament to the common history of Belgium and the Congo at a given epoch[.]


It is clear that neither the story, nor the fact that it has been put on sale, has a goal to... create an intimidating, hostile, degrading or humiliating environment[.]

Read here the whole document in French.
I'm not a lawyer or, more specifically, I'm not a Belgian Lawyer, but come on! "candid and gentle humor"? How can a book that dehumanizes the Congolese people depicting them as childish and lazy and in need of white peoples' guidance contain "candid and gentle humor"? Are racist jokes "candid and gentle humor"? And how does the entertainment purpose excuse anything? Plus: how can the environment depicted in this blatantly racist book not be "hostile, degrading [and] humiliating"? The known argument that the book reflects its times' prejudice doesn't hold water either as I've shown, here. Hergé could not invoke an insanity defense. He was responsible for creating racist imagery and racist writing. Others, like Alan Dunn, for instance, at roughly the same time, didn't do so.
There's another reason why Hergé couldn't invoke the insanity defence mentioned above: he's dead since 1983. Again, I'm no lawyer, but how can a court judge a dead man (guessing his intentions!) is completely beyond me. I know that the "goal" part above is what matters to the court, but in the dubious case that they are psychic isn't there something called criminal negligence in the Belgian law? What they should be judging is how can today's copyright owners ignore the racism in one of their books refusing to do anything about it. I can understand why did the Brussels court mention the banning of a book by Voltaire, but Mondondo and the CRAN didn't want to ban Tintin in the Congo in their secondary plaint, they just wanted to add some heads up and some informative paratext? Here's what the court had to say about that:


As for the subsidiary inclusion of a warning it is not only an interference with the exercise of the freedom of expression it also hampers the moral right to the integrity of the work which can't be contested because the defendants don't own it [Fanny Rodwell owns the moral rights to Hergé's oeuvre, not Moulinsart and Casterman].

From now on we're informed that a foreword constitutes a violation of a "work's integrity." I can understand the reasoning behind the idea that such a foreword would be a violation of Moulinsart's and Casterman's freedom of expression (as well as Fanny Rodwell's moral rights) though. Said foreword would be forced on them by the court. You're wrong if you think that I'm on Mondondo's side on this. I agree with him only when he says that the court suit was a means to force Moulinsart to seat at the conversation table. I understand the strategy, but it was doomed from the beginning: big corporations don't deal with the little guy. When I repeatedly say on this post that I'm not a lawyer what I really mean is that I don't want to discuss matters I know little about. (What I do know, however, is that they are lousy comics critics at the Brussels court.) What's unfortunate is that the publishers themselves don't comply with Mondondo's wish for a foreword of their own free will as they should. It shows that Continental Europe is still way behind America and the UK when these matters surface in the public sphere.
Another quote in the court's decision (written by De Theux de Meylandt), states:


We see in particular that Tintin in the Congo does not put Tintin in a situation where there is competition or confrontation between the young reporter and any black or group of blacks, but puts Tintin against a group of gangsters... who are white[.]

I'll let a Portuguese anthropologist living in Maputo, Mozambique, José Flávio Teixeira, answer to the above for me (in a review of Deogratias, a book about the Rwandan Genocide by Belgian comics artist Jean-Phillipe Stassen):

Beyond a self-centered gaze (ethnocentric: what interests him, above all, is how "his people" behave themselves elsewhere and how they get astray from the recommended "good behavior") what the book states (distractedly) are two fundamental points: the perennial (the need for?) European leadership; the inferior malevolent capability of the Rwandan people (the African people). Thus crystallizing the racism, affirming white superiority: “people” (race, because, in the end, the book is about race) who are more in the lead, who are more corrupt, meaner. More human, right?

Going back to the UK, Ann Widdecombe, a Conservative politician, criticized the CRE (see above) for their support of Enright's views (she said that their claim was ludicrous):


It brings the CRE into disrepute - there are many more serious things for them to worry about.

This reminds me of that American officer, after Belgium's liberation, who refused to accuse Hergé of collaboration with the Nazis under the excuse that he didn't want to cover himself in ridicule. It's a well known fact: comics are less powerful, less corrupt, less mean. Less of an art form, right?
Posted by Isabelinho at 10:11 PM