Maybe I shouldn't post a whole story by the great Héctor, but I'm doing it just the same because I don't believe that this story will ever be republished (Hugo Pratt didn't drew it!, you see?!...). Maybe the Argentinian government will put their money where their mouth is and someday they will publish Oesterheld's oeuvre in a deluxe collection with great production values (getting the Library treatment, I mean...). While that doesn't happen, and I don't believe that it ever will, to be honest, here's my small contribution... Frontera # 48, March 1961: Héctor Germán Oesterheld (w), 19 year old Jesús Balbi (a). My translation. 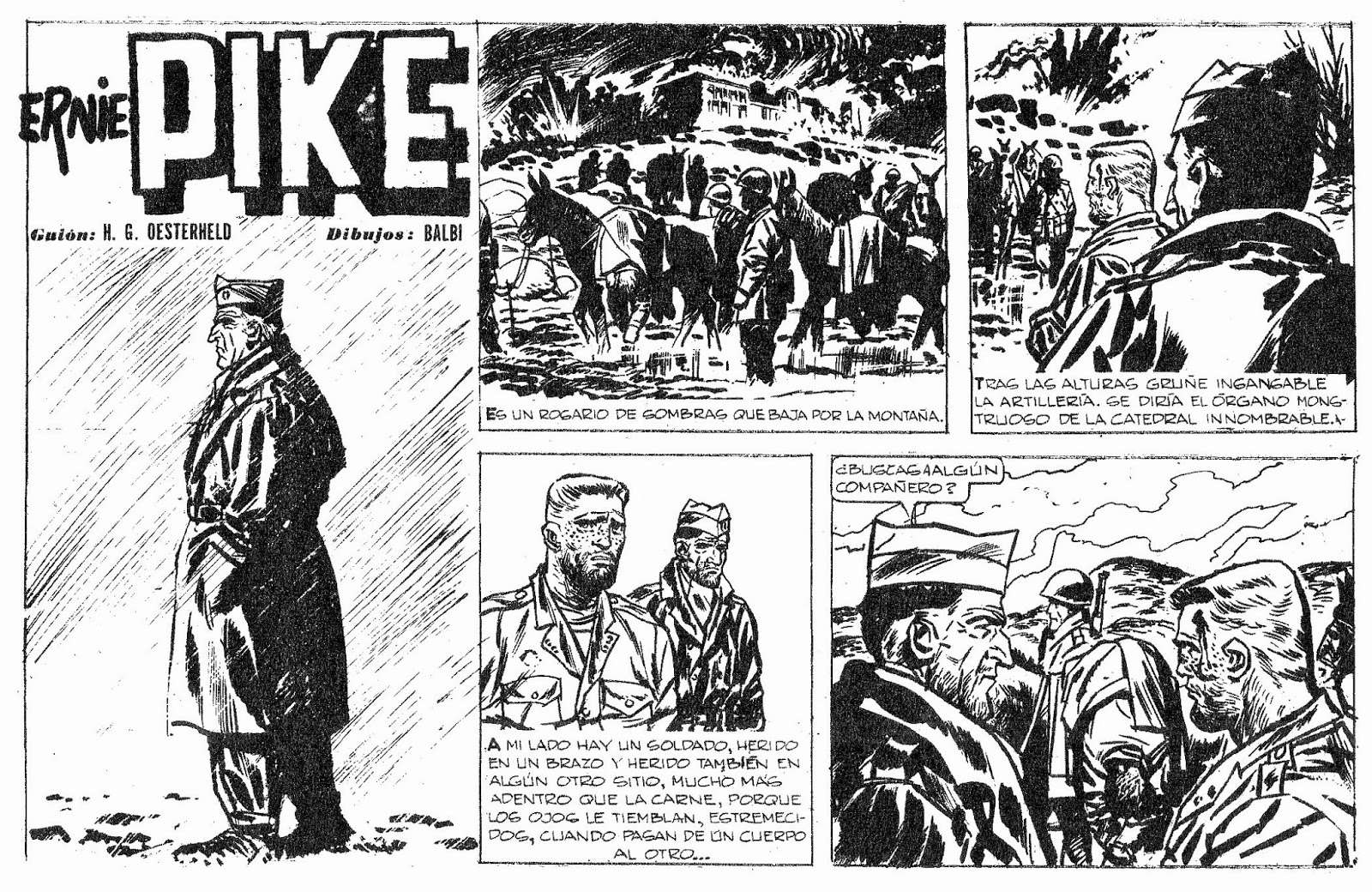 (1/2) A rosary of shadows is coming down the mountain. /  (1/3) The artillery grunts relentlessly at the heights. It seems like the monstrous organ of a nameless cathedral. / (1/4) There, on my side, is a soldier, wounded in an arm, but also wounded elsewhere, a lot deeper than the flesh, because his eyes are trembling when they go from one body to the next... / (1/5) "Are you searching for a comrade?" 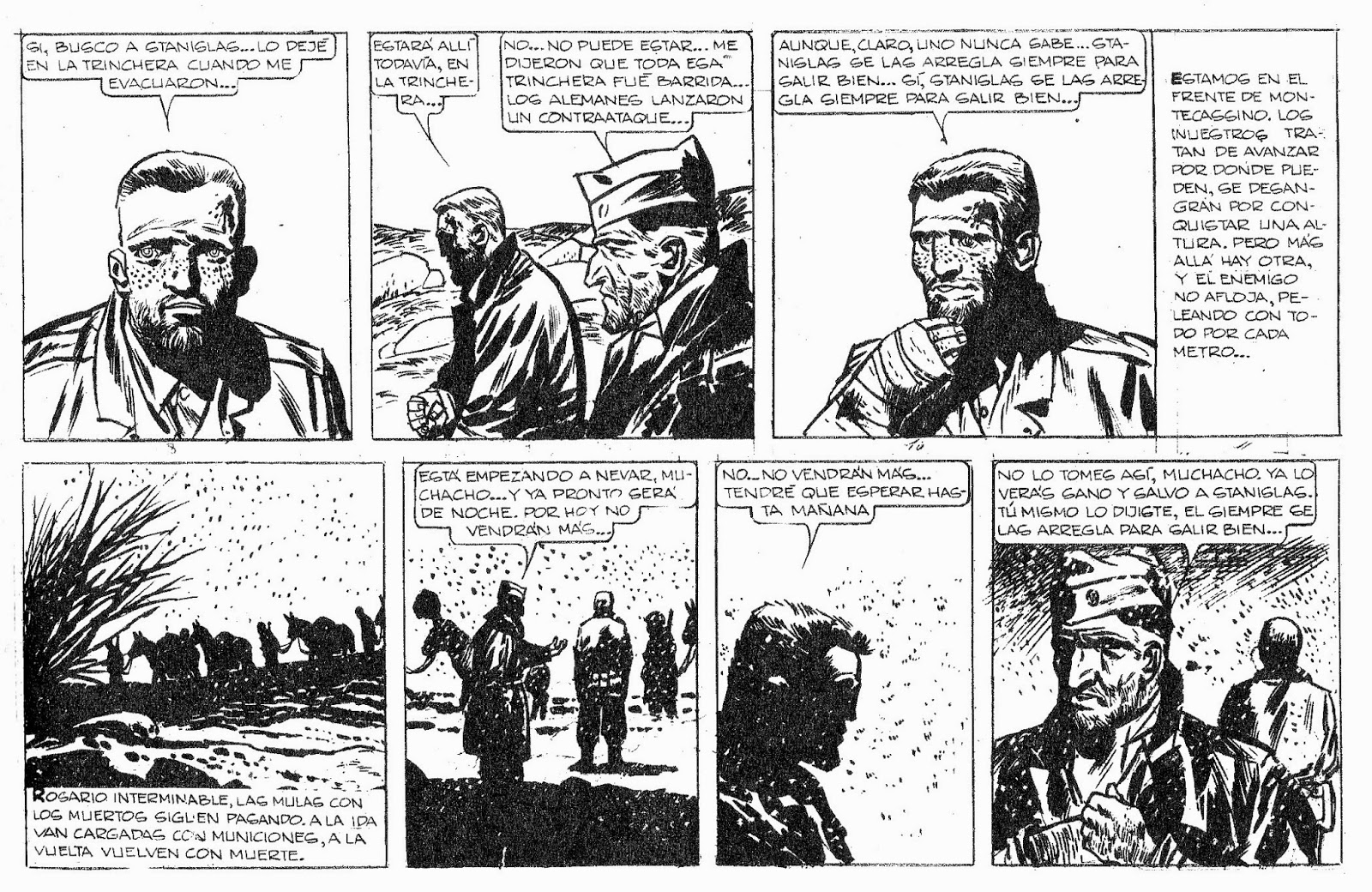 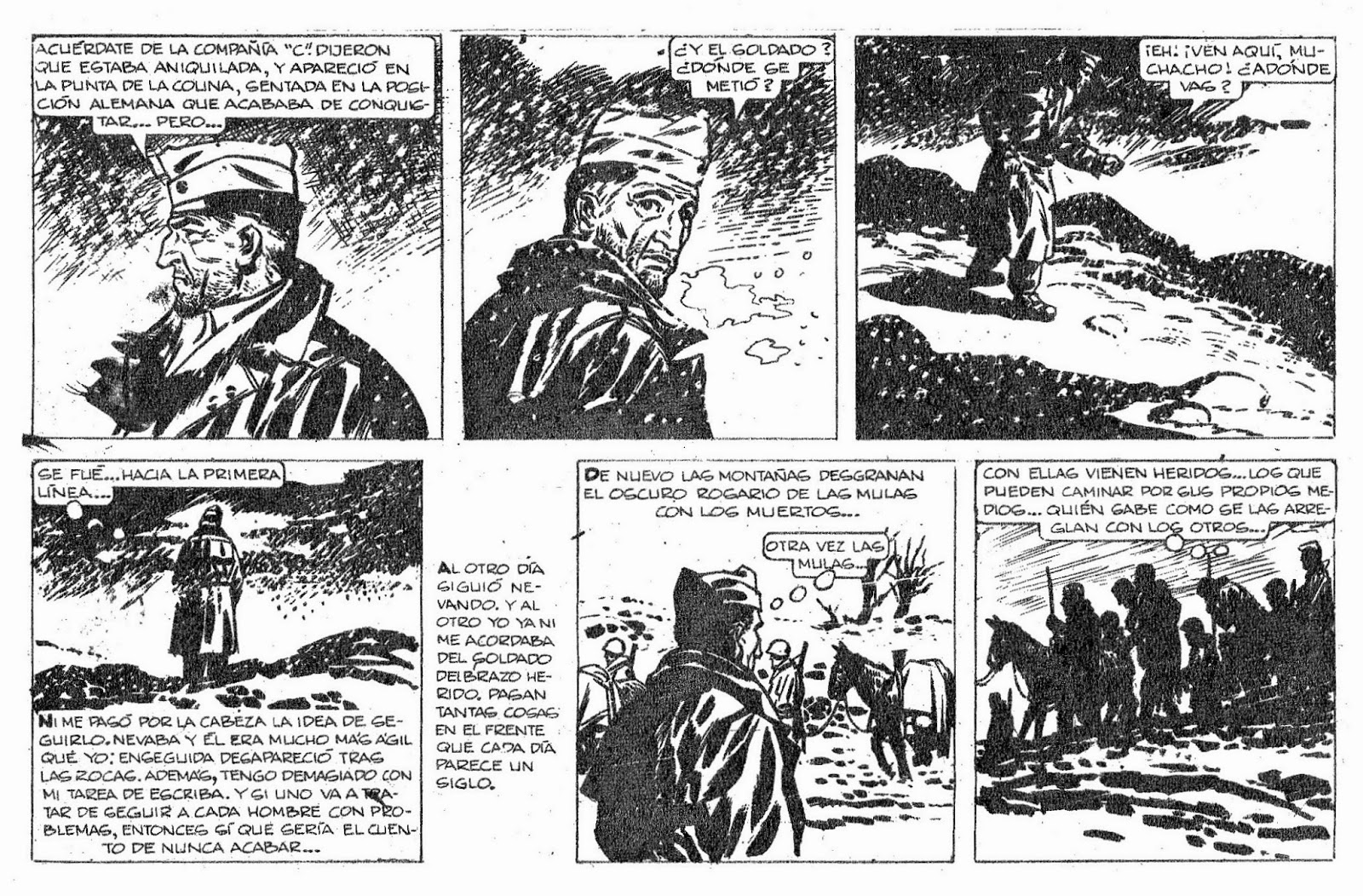 (3/1) "Remember Company C. They said that it was licked when they appeared on the ridge they had just conquered to the Germans... but..." / (3/2) "Where's the soldier? Where is he?" / (3/3) "Hey! Come back here! Where are you going?" / (3/4) "He went... to the frontline..." It didn't even cross my mind to go after him. It snowed and he was a lot more faster than me. He soon disappeared behind the rocks. Besides, I have enough with my writing chores. If one tries to follow every man with a problem, this would be the never ending story... / (3/5) The next day it continued snowing. And the next I didn't even remember the soldier with the wounded arm. There're so many things going on at the front that every day seems like a century. / Again the mountain threshed its black rosary of mules and corpses... / "The mules again..." / (3/6) "The wounded come with them... Those who can walk, I mean... who knows what the others do..." 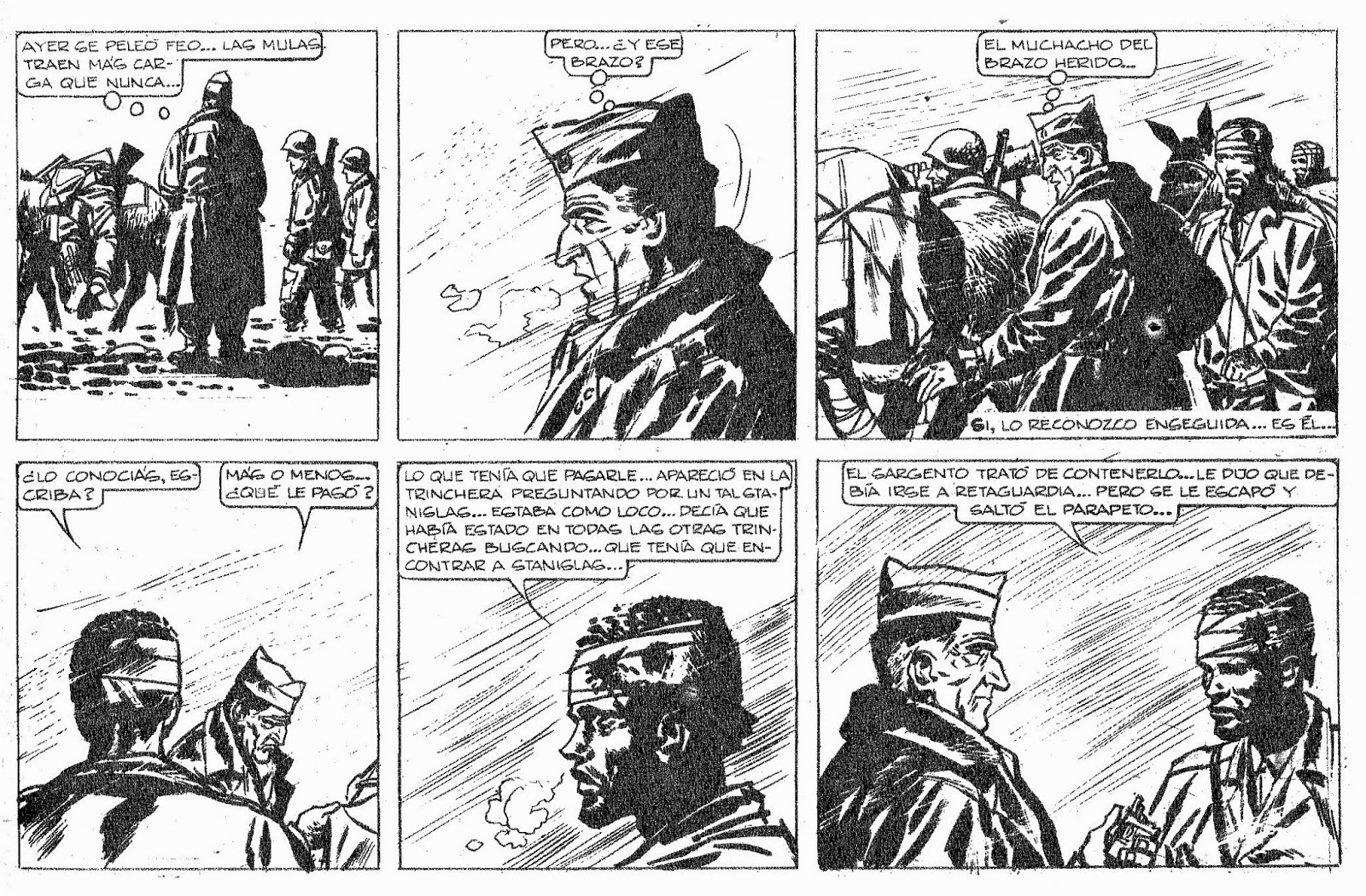 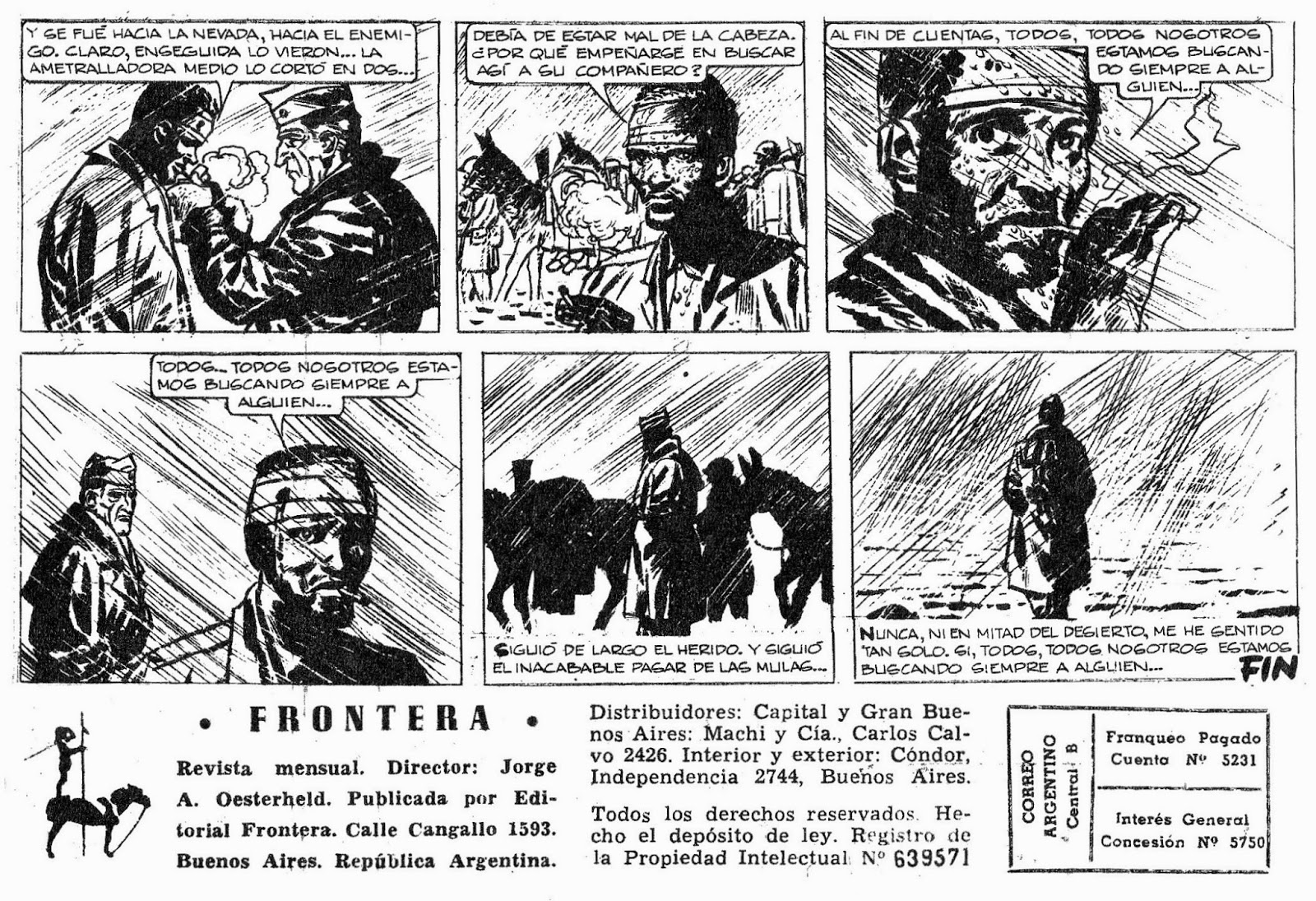 I'm new to your blog, but actually in both France and Italy they've printed a version of HGO and Solano Lopez's Eternauta scanned from the actual original art. The question is when will we see it in it's original Spanish language with scans from the original art instead of the old magazines?

Fantagraphics will also reprint the series for the firts time in English (translated as The EterNOnaut, beacuse as Eternaut it sounds like "Eat her not"). I wrote them about the possibility of using scans from the actual original art, but they are most probably going to go with the horrible Record reprint from Argentina.

That's unfortunate indeed. Thanks for all the info. In any case "The Eternonaut" is awkward. If they don't like "The Eternaut" (the correct translation) I could point them out to a better translation. I'm not saying what it is because it's not mine and it was suggested to me in a private conversation. No one from Fanta asked me anything, of course...