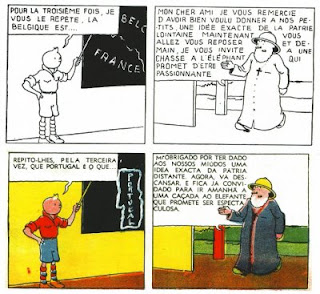 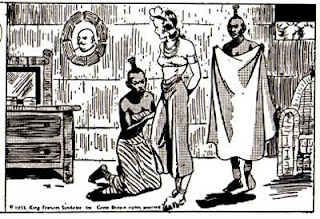 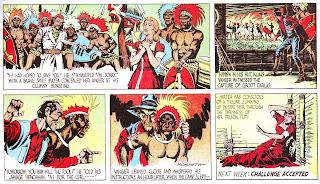 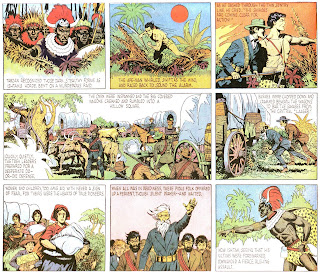 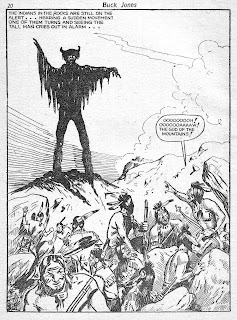 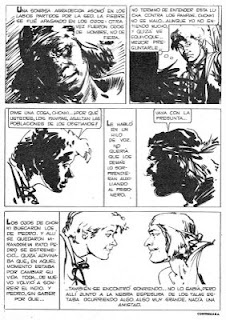 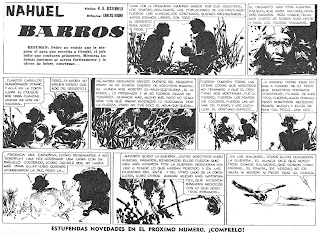 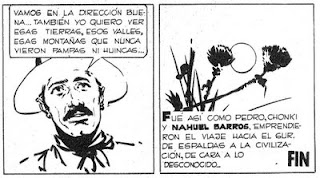 9.
Images:
1. Tintin teaches Congolese children all about their homeland: Belgium, of course (Tintin au Congo [Tintin in the Congo] by Hergé, Editions du Petit «Vingtième» [the little «20th Century» publishing house], 1931; the "wonders" of colonialism!); in the Portuguese edition published in O Papagaio [the parrot] # 230 (1939), the story was titled "Tim-Tim em Angola" [Tintin in Angola]; Tintin teaches Angolan kids all about their homeland: Portugal, of course (as an aside: O Papagaio was the first mag in the world, Belgium included, to publish "Tintin" in color);
2. African women were "naturally" servants to their colonial mistresses (panel from Tim Tyler's Luck newspaper comic strip by Lyman Young, 1933);
3. panels from the Tarzan newspaper comic strip by Burne Hogarth (page 445, September, 17, 1939; as published in Tarzan in Color Vol. 9, NBM, 1994): after my detection of Lavater's physiognomy theory in the series Flash Gordon by Alex Raymond (cf. my April, 19, post) and Tarzan (cf. above), I must conclude that it was important as a visual short cut to newspaper (and comic book, I'm sure) comics artists (I also detected it in the Asterix albums, by the way); to see how it works we just need to compare the good guy's appearance (athletic and handsome, even if approaching middle age) with the baddies' mugs (the African baddie is a mean looking "savage;" the Caucasian baddie isn't in very good physical shape and looks like a rat: baddies rarely shave); the captive woman is young and attractive and, in the first panel, has the pose of a Christian martyr;
4. more panels from the Tarzan series by Burne Hogarth (page 356, January, 2, 1938; as published in Tarzan in Color Vol. 7, NBM, 1994): the word "savages" (and "horde") is actually used to define the African attackers (the name "Ishtak" sounds like a whip cracking); they're depicted as an ugly bloodthirsty lot while the colonists are "pious folk" (the Christian iconography couldn't be absent; there's even a Moses figure); the colonial popaganda can't get more obvious than this; forget slavery, forget the exploitation of Africa's natural resources by the colonial powers, forget reality: when Francis Lacassin compared Burne Hogarth with Michelangelo (in a cliché that became famous: "Tarzan rencontre Michel-Ange" [Tarzan meets Michelangelo], Giff-Wiff # 13, first quarter of 1965) he could only be kidding!;
5. panel from "The Tall Man," Cowboy Comics # 144 Buck Jones, September, 1955, Charles Roylance (a), writer unknown; American Indians are seen as superstitious children that are easily deceived by the Caucasian hero;
6. page from the "Nahuel Barros" series (Hora Cero Suplemento Semanal # 95, June, 24, 1959); Héctor Germán Oesterheld and Carlos Roume depict this peaceful meeting of two different worlds beautifully (Pedro becomes friends with Chonki; this one and the following quotes, my translation): "...[Pedro] didn't know it at the time, but there, near the thick blackness of the grazing, something was happening. Something big. The birth of a friendship.";
7. another page from the "Nahuel Barros" series (Hora Cero Suplemento Semanal # 96, July, 1, 1959); Chonki answers Pedro's question "Why do you, the Pampas, attack the Christians' settlements?": "the huincas, the Christians, taught us... [...] we still own the desert! But we don't own ourselves anymore... [...] The huinca says that we are savages, that we're beasts... the Pampas, it's true, aren't the same [as the Christians], we aren't better or worse than the huincas..."; (to those who defend that comics are primarily a visual medium this page may seem too wordy; I don't understand such a logophobia though: why be against words if they're greatly written?; are mediocre drawings better than great words?; besides: the best visual artist isn't someone who just has technical abilities (that's a virtuoso), a great visual artist is someone who uses visual thinking in a remarkable way; in this page Carlos Roume delivers his own messages: he uses the thistle as a symbol of the Pampa: the plant's thorns are a reminder of how hard life in the desert is; the bird (an howl) represents freedom and knowledge; the moon (the circle: Pedro) represents perfection (the unity) and change (because of the moon's phases);
8. Sgt. Kirk sez (Héctor Germán Oesterheld - w -, Jorge Moliterni - a -, Hora Cero Suplemento Semanal # 101, August, 5, 1959): "Do you know doctor, what I've just learned?... / That there are no palefaces, or indians... there are just men... just men [...]";
9. Nahuel Barros says that he also wants to explore Patagonia (Hora Cero Suplemento Semanal # 101): "That's how Pedro, Chonki and Nahuel Barros began travelling southbound. Their backs turned to civilization, facing the unknown..."; Carlos Roume repeats the symbolism of the thistles (Nahuel, Chonki) and the moon (Pedro) between them.
Posted by Isabelinho at 8:08 AM

Thanks for the Tintin (Tim-Tim) example. I never knew about a Portuguese version of Tintin in the Congo.

I've featured it on my blog.

Why would Lacassin be kidding?

He was dead serious, I'm sure.