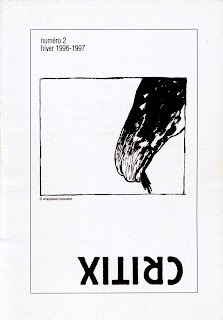 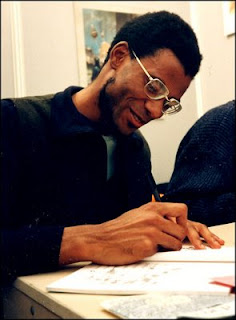 "I was born in 1967 in Guadaloupe and I arrived in Paris in August 1975.
It was while reading American comics [just "comics" in the original text], particularly those by Jack Kirby, that I have begun loving comics ["bande dessinée" in the original text]. Kirby is my first and indelible influence.
I attended different art schools over six years, two of which at the fine arts school in Paris where I discovered what's drawing really about and the importance of an expressive research.
A friend of mine told me a phrase by our teacher, it was roughly like this:
"Everything was already explored in painting, everything was already done. The future lies in comics."
I have, after hearing them, those words always on my mind."
That's how Aristophane (Firmin Aristophane Boulon) presented himself in the pages of Critix magazine (It wasn't a fanzine because critics are rational beings and fanatics are not), issue # 2 (Winter, 1996 - 1997, my translation). The best year in comics, ever, 1996, started with Aristophane's great Conte démoniaque (demonic tale; L'Association - the association -, January) and ended, always under Aristophane's sign, with an extended dossier about him in the aforementioned Critix # 2.
Critix (1993 - 2001), with Bruno Lecigne's Controverse (controversy; 1985 - 1986) and, more recently, Jean-Christophe Menu's L'éprouvette (the test piece; 2006 - 2007) are my canon of specialized non-academic critical magazines about comics (Barthelemy Schwartz's and Balthazar Kaplan's - two noms de plume - Dorénavant - henceforth -, 1985 - 1989 - is in a class of its own and deserves a post on The Crib). The Comics Journal (1977, ongoing) and Les cahiers de la bande dessinée (the comics notebooks; the Groensteen years, of course: 1984 - 1988) are missing links with some hits, but also with a lot of misses. Both mags do (and did, respectively) too many concessions to children's comics (the so-called mainstream) and other utterly mediocre stuff (that's, in my humble opinion, one of comics criticism's main problems: for comics critics everything is equally mature, equally ambitious, equally good; in a word, the main problem with comics criticism is: overrating). 9e art (ninth art; 1996, ongoing) isn't bad, but the institutional weight of the CNBDI (national centre of comics and images) didn't help. (Two other great comics mags were Thierry Lagarde's STP - 1976 - 1979, and Franck Aveline's L'indispensable - the indispensable -, 1998 - 1999; Bang!'s last years, around 1975 - 1977, isn't bad either.) My mag's canon inclusion above doesn't mean that Critix was totally overrating free though. Nobody's perfect...
Its a rare privilege to read a critical text by one of the best comics artists in the pantheon. That's what a body can do in Critix # 2: Fabrice Neaud reviewed Conte démoniaque (37 - 53) and he did it superbly. In the same issue Renaud Chavanne also reviewed Conte démoniaque (54 - 64) and Évariste Blanchet wrote a short note about Aristophane's Les soeurs Zabîme (65, 66). Les soeurs Zabîme (the Zabîme sisters) was published by Ego comme x (a word play meaning "ego comix") in 1996; three short stories were also published in Ego comme x magazine - # 2 - 4, 1994, 1995.) If we don't take into consideration his short stories, published in various anthologies and his first book Logorrhée (logorrhea; Le Lézard, 1993), Faune (faun; Amok, 1995 [Lapin # 2, July, 1992]) completes Aristophane's major oeuvre. A very short list, unfortunately...
In his three great books Aristophane touches the same theme: evilness is an important part of being human. Conte démoniaque is a three hundred pages epic set in hell, but all the demons' cruelty, hubris, will to power, unequivocally remind us of our own world. Faune's subtitle is self explanatory: "L'histoire d'un immoral" - an immoral one's tale. The reason why I like Les soeurs Zabîme so much is because you expect a demon and a faun to obey their own evil instincts. What's a bit unexpected, at least in comics' bowdlerized world, is to find the exact same reactions in children. The Zabîme sisters and their friends are simply some of the best characterizations in comics. The subtlety of the situations and the truthfulness of the characters' reactions are on a par with Proust's best pages.
In Aristophane's short story "La prière du voyageur à la mère universelle" (the wanderer's prayer to the universal mother; Ego comme x, # 5, 1997) the traveller begs (my translation): "Oh, divinity, purify me. turn me into a perfect man, worthy of you" / "As all answer he listened to the same eurythmic murmur: "Your goal is not human, your goal is superhuman.""
Aristophane died prematurely in 2004, he was thirty seven years old. In the doubtful assumption that he wouldn't quit comics, like so many did, and continue to do, I can only imagine what this great artist would give us in his future. Our present...

Posted by Isabelinho at 4:24 AM

Hi, Domingos: thanks for all the references about Aristophane comics. I've been searching his work in the last years, and you've given me more paths to follow.
9 art appeared late in 2008, this year it appeared in time. Groensteen no longer writes in it, but I think they've recuperated some Eprouvette's writers.

Hi Mario!
You're welcome! Glad to be of service, but I also have to thank you for your info re. 9e art!
I corrected my post already.