The Return of the Prodigal Daughter: Carel Moiseiwitsch's This Is a True Story 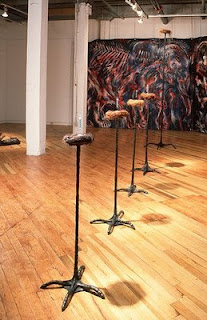 It's a well known fact: comics readers are rarely given the opportunity to follow a comics artist's career from her first steps to maturity to old timer days. Either the artist is doing adolescent stuff or lame jokes (don't be fooled: editors make sure that the jokes are safe and, therefore, lame), in two words, mainstream pap, or the best we can expect is the work of thirty somethings... After that, comics artists get families, bills to pay, etc... and disband for greener pastures. (Another hypothesis is faithful readers getting a book every sixteen years or so...) All these facts are easily explained: there's no money in art comics. Period. It's easy for someone outside the field to say something like "Kafka had a daytime job too," but doing comics is very time consuming and hard. This explains why we have to wait an eternity for the work done by the few who don't quit entirely.
And, then... it's also possible that some people might simply lose interest...
I don't know in which case to put Carel Moiseiwitsch, but she did some very interesting comics for a while and disappeared completely from view after that. I say "interesting" because she actually had something to say. That, has we know, is a capital sin in a babymen's milieu that calls what's dumb "fun" and calls "pretentious" and "elitist" everything that's not "fun" (i. e.: dumb).
Moiseiwitsch wasn't exactly in her thirties when she published in Weirdo (# 13, Summer, 1985) or when Fantagraphics published an anthology of her short stories (Flash Marks, June, 1989; she was born in 1941), but my point stands because she devoted herself to painting and political activism (in defense of the Palestinian people) in more recent times.
One of her most spectacular actions was the creation of a fake (four pages) Vancouver Sun edition. The Seriously Free Speech site gives the details (Canwest: Media Bully: http://seriouslyfreespeech.wordpress.com/): "In June 2007, the Palestine Media Collective [Carel Moiseiwitsch and Gordon Murray] produced and distributed 12,000 copies of a newspaper parody of the Vancouver Sun that satirized Canwest’s anti-Palestinian bias with articles such as “Study Shows Truth Biased Against Israel” by Cyn Sorsheep. Six months later, in December 2007, Canwest Mediaworks Publications Inc. launched a lawsuit against those "conspiring" to produce and distribute the parody."
Carel Moiseiwitsch returned like the prodigal son, but she didn't return to publish in a pamphlet (what for?, to let it languish in those freak shows we call comic stores?) or even in an avant-garde comics anthology. She returned in an unexpected place: Duke University Press' Positions, East Asia Cultural Critique magazine (Volume 13, number 1, Spring 2005: 195 - 204). "This Is a True Story," that's what I'm talking about, was done after a striking stay in Palestine during 2003 (as she reported, with Gordon Murray : "The Israeli army is killing and wounding obvious non-combatants such as medical workers, journalists and international human rights activists with increasing frequency. Between March 16 and April 12, 2003, the Israeli forces ran over and killed Rachel Corrie from the U.S. with a military bulldozer and shot both American Brian Avery and British activist Tom Hurndall in the head. Hurndall is currently on life support and is not expected to survive;" Winnipeg Free Press & Palestine Media Center, May 10, 2003).
After her scratchboard Neoexpressionist, Punk, eighties' and nineties' style, Carel Moiseiwitsch drew "This Is a True Story" with a simpler approach. The images are less violent and dark, but I find his pseudo-children's story graphic style very effective ("not suited for children" is "This Is a True Story"'s subtitle, by the way). I, for one, was moved by Abu Khalid's and Hilweh's predicament at the hands of Israeli soldiers. Quoting Moiseiwitsch and Murray, again: "the Israeli military did not seem to view Palestinians as human beings." This reminds me of the most celebrated graphic novel of the 20th century, but that's another story. Or is it?...

Posted by Isabelinho at 4:19 AM

Hi I saw Carel Moiseiwitsch's Wonder Woman parody comic in A Century of Women Cartoonists, and found your entries on her. Thank you!