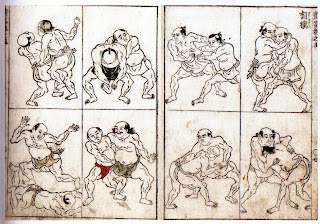 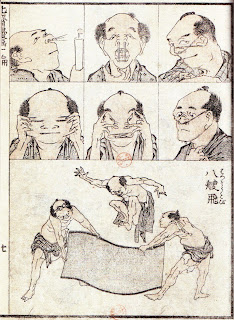 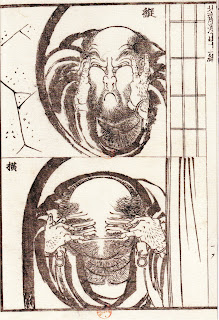 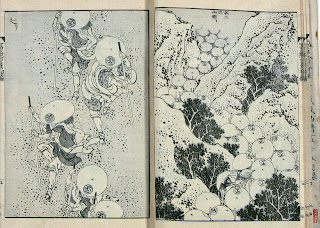 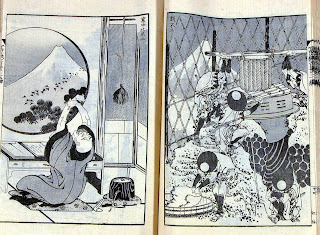 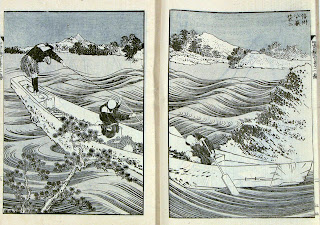 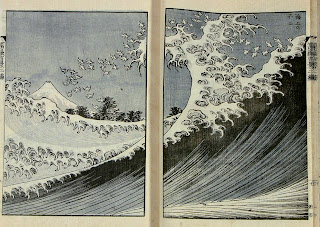 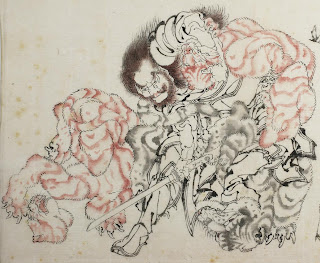 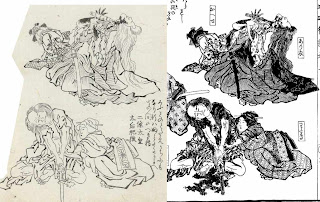 9.
Images:
1. "Sumo Wrestlers" by Hayashi Moriatsu: Gasen (the painting hoop net), vol. 5, 1721, as published in Hokusai, First Manga Master by Jocelyn Bouquillard and Christophe Marquet (Abrams, 2007 [Seuil, 2007]); not only didn't Hokusai coin the word "manga," he didn't even invent the concept... he was "just" stunningly talented, that's all...;
2., 3. they may be done in a descriptive rather than narrative spirit, but comic sequences are definitely part of Hokusai's Manga:
2. vol. 10, 1819 (as published in Hokusai, First Manga Master): travelling performers: the game of the hundred grimaces and the high jump (Hokusai was obcessed by the number; he wanted to achieve, at least, one hundred years);
3. vol. 12, 1834 (ditto): Daruma, founder of the Ch'an sect, grimacing;
4. a truly narrative sequence of two images in Fugakku hyakkei (all the following images, but the last two were caught on the link below): "Fuji no yamaaki" (the opening of Fuji), "Suberi" (sliding down): Fujikō religion pilgrims slowly ascend and rapidly descent Mt. Fuji (the images as well as the image sequences must be read from right to left);
5. right: Hokusai represents the daily work of the common people ("Hizami no Fuji" - Fuji carved; soldiers preparing a meal); left: as written on the Emerald Tablet: "that which is inferior, or below, is as that which is superior or above" (translation by John Everard); Hokusai repeats the form of the Fuji in the people's bodies: here ("Sōchū no Fuji" - Fuji in a window), Kawamura Minsetsu forms the triangle with his arms while yawning;
6. two of Hokusai's favorite topics: water and work ("Shinshū Yatsugatake no Fuji" - Fuji and Yatsugatake in Shinshū); Yatsugatake is a volcanic chain of mountains; the water is lake Suwa; 7. "Kaijō no Fuji" (Fuji at sea): Hokusai returns to his famous great wave, but he inverts the reading order; now, the eye flows with the water, it doesn't confront it; plus, the visual poetry suggests the visual metaphor: bird/foam... the harmony of nature...;
8., 9. original drawings (check out this great site: http://www.hokusai-drawings.com/):
8. Chinese hero overpowering three tigers (mid 1820's);
9. a comparison of an original drawing by Hokusai and the printed work: Bei bei kyōdan (a rustic tale of two heirs) vol. 4, 1815 (words by Bakin Kyokutei).

Here's how Hokusai Manga looks like: http://www.akantiek.eu/print/hokset.jpg.
Posted by Isabelinho at 4:38 PM

Beautiful draftsmanship … you made my day! Certain contemporary artists (and critics), who pride themselves on their line work: "betraying no hesitation in hand or head. It is stolidly gestural, brawnily lyrical, unconsciously sublime" line work should look here, and see how it's really done.

Good draftsmanship is the god of the page!

Well, Hokusai was a great artist. One of the best that ever lived, no doubt about it. But knowing that doesn't prevent me from liking John Porcellino's art too (as my post about him proves).
Anyway, I'm glad that you liked this post Mahendra.
Thanks for your comment.