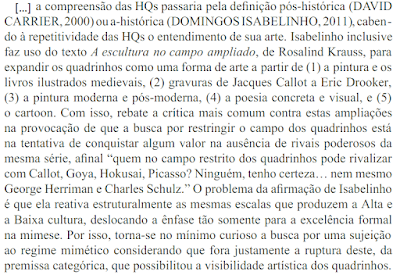 How is The Aesthetics of Comics by David Carrier an awful book?

Let me count the ways:

1 - The unacceptable amateurish cover (it's unbelivable how incompetent the shading is). Even worst is the use (on said cover) of one of the author's photos (depicting him aged 8 according to the list of illustrations, aged 10 according to the back cover!). A book about the aesthetics of comics has a child on its cover! That's just what this artform needs: yet another statement saying that comics are for kids!

2 - From the Introduction: "This book is the first by an analytic philosopher to identify and solve the aesthetic problems posed by comic strips". SOLVE? Did he say SOLVE? According to this statement all previous books about this theme let this problem unsolved, so, here comes the great analytic pholosopher and BAM!, he solves it.
And what pray tell did he solve? Good question! The master sez that comics only exist when: a) there are speech balloons; b) closely linked images (no big narrative gaps between them); c) these images are not very big allowing us a personal reading of them (unlike film and painting which are viewed in public places).
I say that he's wrong: a comic is still a comic even if it is 20 stories high. Languages don't change that way. If I write a huge phrase in English on the wall it doesn't stop being English, does it? Plus: I say that comics don't need the speech balloon (I'm not claiming that I'm right - unlike David Carrier I'm not an essentialist - but he isn't either because no god ex machina came from above supporting either opinion). Recently I read Destiny by Otto Nückel. The images are not that close (the images aren't even juxtaposed), but I see no reason not to integrate this novel in comics history.
As I see it David Carrier solved absolutely nothing.

3 - He talks mainly about caricature (saying this amazing thing on page 22: "Finding Baudelaire's odd antitheology absurd, it seemed a waste of time to analyse his argumentation" - it makes me wonder why do I bother to even comment Carrier's absurd theories about comics). My question is: what do comics, as a language and an art form, have to do with caricature?

4 - Carrier says that unlike painting comics don't need a specialized knowledge in order to be understood. Well, just a few minutes ago I looked at a Finnish comic. Needless to say that I couldn't understand a thing.
No, seriously: he says that Mondrian could lead a marginal life (hence: he could be obscure in his work) while a comic artist needs the public. Really? Tell that to alternative comics artists!
Plus: a) we all know people that simply can't read comics; b) most comics readers can't understand Martin tom Dieck's work (Martin who?).

5 - To support his theory he says that no one wrote a book lenght analysis of any comic like the one Marilyn Lavin did for Piero della Francesca's Legend of the True Cross. With the world full of theorists like him he's obviously right. No one did and no one ever will.

6 - (And worst of all) Carrier cheats: when he claims that comics are a posthistorical art form (it doesn't evolve technically; Maus and City of Glass just add new content without being technically innovative) he gives contrary examples of technically innovative art movements: cubism, surrealism, various forms of realism, abstract expressionism, minimalism, and pop art. Most of the artists who embraced the above mentioned styles used oil painting, a technique introduced in Flemish painting in the 15th century! The real technical innovations were Picasso's collages, Pollock's use of sticks instead of brushes, and various mixed media (to follow Carrier: what most of the 20th century painters really did was to add new content to the history of painting). Now comics: even Jack Kirby used collage! Dave McKean used computer generated images, Alex Barbier used paintings and Anke Feuchtenberger just pencils, Druillet blew the page layout up, Moebius did the same with the narrative sequence, etc... etc... etc...

7 - David Carrier is the 3.675 th theorist since Hegel to say that art is dead. I'm really not in the mood to discuss that.
He supports Lessing's dichotomy of arts of space and arts of time. Just when I thought that said theory was dead and buried.

8 - This one goes to Ernst Gombrich (quoted by Barrier on page 69): "What I find very interesting is that so many half literate or illiterate can read the comics because they are combined with images. This combination is apparently much easier than either only images or only texts".
What a load of crap!! What images is he talking about? What novels is he talking about? What comics? Who are the readers and viewers? To most people Atak is surely more difficult than Danielle Steel; Fabrice Neaud more complex than Norman Rockwell.

He says a few interesting things, none about comics though. I said it on this forum before reading the book and I'll repeat it now that I suffered through it: David Carrier knows nothing about comics.

Posted by Isabelinho at 4:25 PM