In my humble opinion the best Belgian comics artist is not Hergé… The best Belgian comics artist is Frans Masereel…
I vaguely remember mentioning this to a couple of Masereel’s fellow countrymen and I’ve got two different answers (I must add that, in my view, of course, I chose my collocutors well): (1) a nod of approval; (2) something like: In Belgium we don’t view Frans Masereel as a comics artist.
(Needless to say that, besides some puzzled expressions asking “who are those?,” most of my possible Belgian interlocutors would react in a third way calling me a lunatic, or worse, depending on the person’s degree of Tintinophily.)
The first reaction was understandable because said person is an artist himself and what he does is akin to Masereeel’s work. The latter one is more interesting to me at this particular moment because it permits me to enter one of the muddiest territories in comics scholarship once again (when will I learn, right?…), the old conundrum: what is a comic?…
I’m not going to answer that question because it can’t be done. All the answers that one can come up with are rigged because they depend on a previous particular view of what’s essential in a comic (and that’s not only prescriptive, that’s also arbitrary). To Bill Blackbeard, for instance, speech balloons and image sequences are essential so (even if there are older examples, namely, here or even, here) comics started with Richard Felton Outcault’s Yellow Kid in 1896.
Saying this though, doesn’t get us very far (my thoughts on the subject, are here, by the way). What interests me right now are two related points: (1) the sociological side of the problem; (2) anachronism. (1) Words have a (social) commonly agreed meaning. The dictionary tries to stabilize it, but significations aren’t fixed. There’s a reason why we call Maus a “comic.” The sense evolved to include serious work while the signifier stood still. Even so I accept that “comics,” to most people, don’t include Frans Masereel’s oeuvre. Perhaps it will, someday… (2) Frans Masereel didn’t view himself as a comics artist. As far as he was concerned he did wood engravings, that’s all… To call his cycles “comics” is an anachronism. Maybe so, but it seems to me that we are guilty of anachronism all the time and nobody cares. To go back to Tintin, the expression “bande dessinée” didn’t exist when Hergé started doing comics. Why do we continue to say that he did comics, then?… Did the Lascaux painters call what they did “painting?” Is that important? How logocentric can we get?… 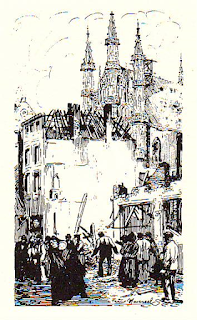 As you can see in this 1915 illustration above Frans Masereel was a naturalist. But working for the pacifist newspaper La feuille in Geneva as a political cartoonist during WWI Masereel needed a less detailed, more urgent, style. As Josef Herman put it:

Working for La Feuille posed two main problems for [Masereel], both of a technical nature. One was that the drawing had to be done quickly, leaving no time for the careful, detailed draughtsmanship he had practised until then. The other was how to achieve maximum effect using poor quality paper, on which thin lines were simply lost. He solved these two problems with the true instinct of a man of genius. He avoided drawing with a fine pen and took a thick brush, in the process giving up the search for tonal texture. He now used large planes of intense black, drawing lines wherever needed with a brush. The emotional effect he achieved was staggering.

Maybe the times weren’t right for nuanced views of the world (?). I love Frans Masereel’s verve and variety (he did manga in the original sense of roaming drawings), but his ideological views and Expressionist style push him into a less than complex view of the world sometimes (the fat, jeweled, cigar-chomping capitalist, for instance, is a regrettable stereotype). You can see one of Frans Masereel’s political cartoons as published in La feuille below: 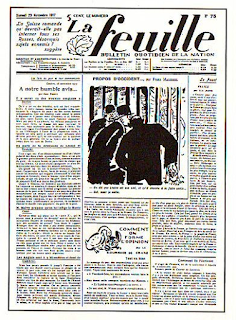 Frans Masereel was 75 years old when he published Route des hommes (1964). He did “novels without words” all his life (more than 50, according to David Beronä). Route des hommes is far from being one of his best (that would be Passionate Journey – 1918 – and, my personal favorite, The City – 1925).
Route des hommes is about the horrible and great things that happen to humankind. We find in the book Masereel’s usual topics: war, famine, exploitation, but also progress, team work, joy, etc…
The greatest thing about this edition of the Musée des Arts Contemporains au Grand-Hornu and La Lettre volée (2006) is that it shows both Masereel’s prep drawings and his wood engravings. In this way we have access to the artist’s creative process as never before. 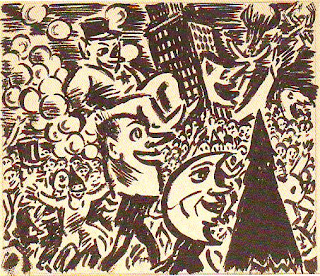 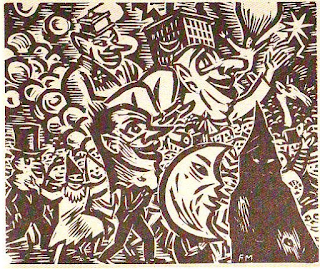 We can see above how Frans Masereel cites another Belgian painter, James Ensor (ditto Jacques Callot at some point). It’s interesting how what seems to be a tree in the foreground of the drawing becomes a sinister figure in the wood engraving (death waits us all at the end). His composition changes (increasing the two background figures’ size) greatly improve his work. 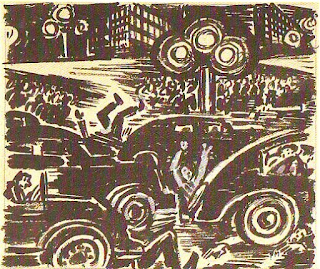 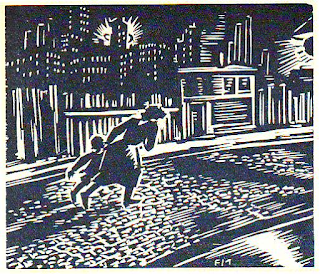 …But, to tell you the truth, I prefer allegoryless Masereel. He could be very poetic, as we can see above…
Posted by Isabelinho at 5:11 AM

better than Hergé!
hahahaha
so funny (not ironical, just because you have to say it beforehand!)
abraços
M