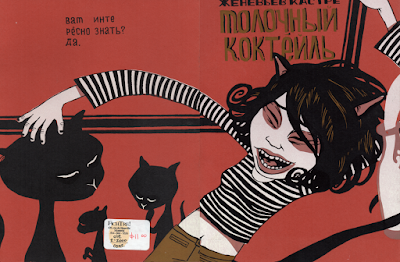 Why 31? That's an odd choice of a number, but the explanation is easy to guess, I guess...Instead of replacing a title in my list I decided to include both choices, hence, 31.

As some of you probably know, I divide the field of comics in two: 1) an expanded field and 2) a restrict field. While the former includes Goya's The Disasters of War or Hokusai's 100 Views of Mt. Fuji or Picasso's The Dream and Lie of Franco or Philip Guston's Poor Richard, the latter is what we usually consider as comics. Don't get me wrong, I don't see any reason to discard any of the above or Masereel's cycles as comics, but I decided to be conservative, just this time. Besides, those comics don't need my pathetic p. r....

I also want to address a well deserved word to those choices that aren't included, but could very well be: what can I say, this is basically a futile and pretty random game, so, mistakes are made. As I said before, I enjoyed the company of such luminaries as Ed Brubaker and Debbie Drechsler lately and I'm sure that I would enjoy and should include a lot more like Geneviève Castrée, for instance...

I'm a perfectionist and that's both good and bad. It's good for obvious reasons, it's bad because it may block you. As I said before I'm highly dissatisfied with the way all this occurred in the last two months, and, consequently, I should call it quits, but a promise is a promise, so, this time I will not let myself be blocked. There's no looking back, now...

Finally: all these choices are obviously limited by my own limits: there are a lot of languages that I can't read, there are a lot of comics that I have never even seen. Of one thing you may be sure, though: I bought them all. In my opinion the moment a critic accepts a book from a publisher s/he ceases to be a critic to become another cog in the prop machine.