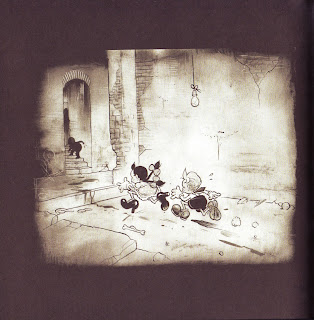 It's very simple, really... I can imagine Pim & Francie telling some stupid children's story that would ruin everything. Al Columbia doesn't fall into that trap. He tells no single story, he hints at dozens instead. And I love the eeriness and the materiality of it all (the unfinished look adds to the effect). I love the "early Disney cartoon" gone wrong look... Not to mention the gorgeous cartooning and composition sense...

Thanks Fanta! Unfortunately I can't forgive you the awful recoloring of your Disney comics, or the dismal recoloring of the Kubert Tarzan in the intro to the latest Prince Valiant volume (why the excessive saturation in the latter books? With a proper handling of the marvelous original color proofs and a more generous size - the Maresca treatment - you could have done the definitive Prince Valiant reprint: another missed opportunity!). 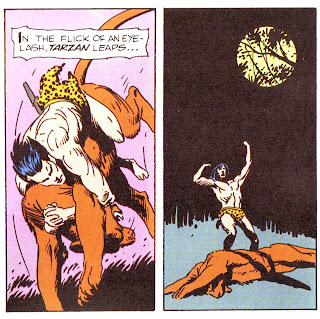 Ugh! Is it possible to imagine a faker and flatter and deader coloring? When will this people learn that the Ben-Day dots serve a purpose? Anyway, why is a guy who lives outdoors that white? Is the whiteness needed to stress the book's racism?
Posted by Isabelinho at 4:45 PM