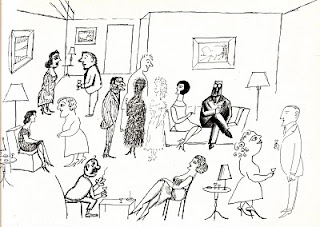 This isn't a review or a criticism of David Mazzucchelli's Asterios Polyp (Pantheon Books, 2009; I'm not a reviewer, god forbid!)... I'm doing a bit of metacriticism instead, again... Reviewing the reviews, I suppose, but it's not even that... It's just a brief note stating my amazement...
I am perplexed because, once again, I realize how comics are truly an art form almost without memory. I say this because only two critics and a reporter (Matt Madden: http://tinyurl.com/yfh9rdk) mentioned Saul Steinberg in the reviews of Asterios Polyp that I read on the www and only one noticed how "Mazzucchelli’s visual quotations of comics history, too, allow him to adapt techniques innovated by other artists, and explore these approaches to their limit. So he nods to Saul Steinberg’s pioneering use of diverse styles to convey subjectivity" (Sean Rogers at http://tinyurl.com/mr3sqn; Pedro Moura mentions an homage to a famous Steinberg New Yorker cover: March, 29, 1976 - more about that later - in Portuguese: http://tinyurl.com/yb2oh6t). Apart from Rogers' and Moura's reviews Saul Steinberg's name can't be seen in reviews by: Hillary Chute (http://tinyurl.com/ycdntjp), Ng Suat Tong (http://tinyurl.com/ye379bd), Charles Hatfield (http://www.tcj.com/?p=2568; who cites comics artists' names left and right...), Derik Badman (http://tinyurl.com/yagzcfz; but he just wanted to talk about the graphic novel's ending), and others... like Scott McCloud (http://tinyurl.com/ksjkf3)... Not even in the very exhaustive Stumptown Notes (http://tinyurl.com/mmkhxo) is Saul Steinberg's name seen anywhere.
Matthias Wivel (http://www.metabunker.dk/?p=2134) pointed out a problem with this visual short cut: "To the uncharitable eye, this might be considered reductive, and thus a weakness of a work that ultimately seeks to convey truth." Agreed, it is a short cut, so, on the one hand it's truly a great visual find, but on the other hand it can't go beyond the surface (it's how others see us in a social situation, not what we really are at a particular point in time - if it's possible to pin down such a thing). (That's how I read Saul Steinberg's drawings, anyway...) David Mazzucchelli copied Steinberg's idea to use it from the other side: "What if reality (as perceived) were simply an extension of the self? / Wouldn't that color the way each individual experiences the world?" In other words: that's not how others see us, that's how we see ourselves and the world around us (enter: Matthias' problem). Mazzucchelli solves it, in my humble opinion, when he states that "[...] these constructions [...] are not immutable." The same characters are identified by different colors and different shapes throughout the book: their mood changes, their behavior changes too (Besides, Asteryos Polyp is the story of a personality transformation: colors being also symbolic, "enlightenment" Asterios is cold cyan blue, but the "new" Asterios is warm primary yellow, the color of death, but also the color of renewal - among the Aztecs, for instance... More importantly though, because of some visual allusions to the Tai Chi in the graphic novel, in ancient China everything in the nuptial bed was yellow to guarantee the fertility of the couple: at the end Hana and Asterios were suposedly on the verge of finally becoming parents.)
Polyp's geometrical shape reminds me of an exhange of opinions at The Comics Journal Messboard, eons ago, about Blankets by Craig Thompson (Top Shelf, 2003) between yours truly and Scott Bukatman: he thought that the shape of the main character's nose looked strange sometimes (all geometricized and all... I told him that it was a visual metaphor and, then, he said something like: of course, he's a blockhead). That's what I think our Asterios is too...
Anyway, I'm sure that you read enough about dualities and Platonic polyhedrons and whatnot, so, I won't bother you with that. I just want to add that those reviewers above are some of my favorite comics critics. Their reviews are in no way less accurate or less good because they failed to see from where David Mazzucchelli came from. It's a bit of a left field comics-wise, I have to concede...
Oh and, is Asterios Polyp going to be part of my canon? Sure, why not?, even if I have to admit that I continue to prefer his shorter stuff in Rubber Blanklet. Even if, again, his best story also came from somewhere else: http://www.metabunker.dk/?p=690.
By the way: did I mention that both Asterios and Saul were architects?...

Images:
At last: after citing Saul Steinberg so many times I posted one of his cartoons (as published in The Passport, Harper & Brothers, 1954) on The Crib: the characters are drawn according to their personalities (or, as we perceive them); we see in the outside (ocularization) what the characters are inside (subjectivism); we can even imagine that Asterios Polyp and Hana Sonnenschein are right there, on the center-right, calmly seated on the couch; David Mazzucchelli didn't copy Saul Steinberg's work faithfully: he used Steinberg's device as a starting point, but, after that, he explored his own ideas (as Sean Rogers put it above): in Mazzucchelli's version of the heterogeneous party Asterios and Hana are really connecting, his blue structure and her red form creating a united morphology.
Posted by Isabelinho at 12:25 PM