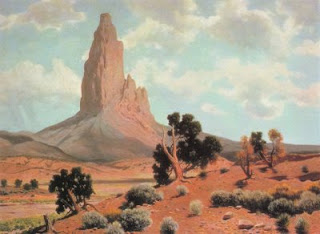 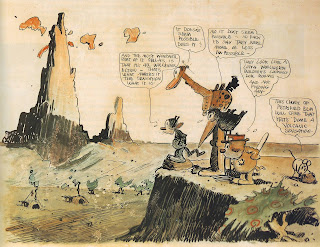 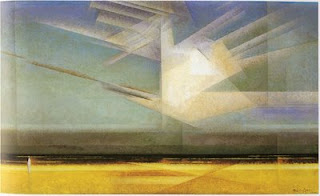 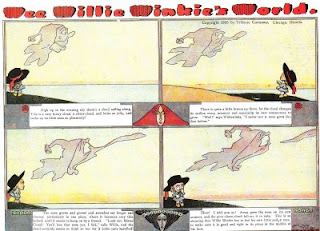 Comics and caricature are two very different things. If images are used in most comics this means that the whole array of visual styles may be used by comics artists. This is rather obvious, but not on the minds of those who view comics through stereotyped colored eye glasses. They simply link comics and Saturday morning cartoons or something similar: comics are funny; comics are silly pictures; comics are childish... etc... comics are caricatures...
There are reasons why caricature was used in such a massive way in comics since the 18th century. Some have to do with the medium of distribution: the newspapers. Caricature was once a powerful tool to satirize politicians (e. g.: the Boss Tweed affair, the Louis-Philippe affair) and, until the recent crisis, editorial cartoonists called newspapers their home (comics artists were their "compagnons de route"). Plus: since politicians lost all power, making fun of them is like satirizing the court jester (what's the point?). On the other hand, inasmuch as economy is the only real game being played, no one laughs at those who really detain power because: 1) maybe (I certainly don't) we really don't know who they are (?); 2) they own the media and they aren't very fond of the idea, to say the least...
But, to quote Peter David, I digress...
Other reasons to explain the above are practical (or technical if you wish): comics are very hard to do; in order to be efficient and deliver his or her work on time a cartoonist has to rely on visual shortcuts. Caricaturing is about exaggerating certain features, sure ("caricature" comes from the Latin word "caricare," which means "to charge"), but it is also about simplifying situations. Sometimes it's about stereotyping (as we all know there's an ugly history of racial caricaturing out there). (These deadline problems shouldn't worry alternative artists with day jobs, I suppose...)
Ernst Gombrich wrote about caricature's history (see link below) having just positive things to say about it. He asked himself why did caricature appear so late in the history of art (?). Gombrich's answer makes sense to me (at least the part that's rooted in Sociology, not psychoanalysis; i. e.: it's not Ernst Gombrich's conclusion, it's Rudolf Wittkover's and Heinrich Breuer's: Die Handzeichnungen des Gianlorenzo Bernini [Bernini's drawings; Bernini was, after the Carracci brothers - & cousin -, one of the first and, duh... best caricaturists ever...], H. Keller, 1931): "The other explanation [...] seeks a solution in the evolution of civilization and society. The spirit of witty criticism and mockery on one side, the sense of the individuality of people on the other, were not developed in a way which would lead to the appreciation of the joke of caricature. Certainly there is truth in this explanation. The social atmosphere of the beginning of the seventeenth century is marked by a culture of wit, esprit and an insight into human nature which created the immortal types of Don Quixote and Falstaff." Gombrich goes on contextualizing caricature as part of the newfound artist's freedom during the Mannerist period: "we are now able to describe caricature in the psychological terms which cover the whole ‘Manneristic’ conception of art. In caricature, too, the artist projects an image transformed by the primary process [the "transformation, ambiguity and condensation" of dreams], giving it as his view of the man. He consciously alters his model, distorts it, plays with its features, and thus shows the power of his imagination — which can exalt as well as degrade. Instead of an objective portrayal of the outer world he substitutes his subjective vision, thus starting an evolution which leads by a winding road to its culmination in modern art."
All this is fine and dandy, but it seems to me that caricature debases its subject most of the times. That's what Pierre Bourdieu says in Distinction (La distinction, Les Editions de Minuit, 2002 [1979]: 229), Harvard University Press, 1984: 208 (translation by Richard Nice): "authority of whatever sort contains a power of seduction which it would be naive to reduce to the effect of self-interested servility. That is why political contestation has always made use of caricature, a distortion of the bodily image intended to break the charm and hold up to ridicule one of the principles of the effect of authority imposition." Why have comics artists persisted (something that they continue to do, as a matter of fact) in using caricature as their chosen style if they want to be serious artists, then? My guess is that tradition is a mighty force to reckon with. Comics artists admire and follow other comics artists before them and this is a very difficult thread to break. As difficult as the obsolete mandatory use of India ink on white paper...
Images:
1., 2. in the images above I compare the imposing mass of Agathla's Needle in Monument Valley
(1. painting by James Swinnerton, a pioneer of American newspaper comics; image published in Jimmy Swinnerton, The Artist and His Work by Harold G. Davidson, Hearst Books, 1985) with a completely deflated image of the same monument
(2. caricature by George Herriman, c. 1925; as published in Krazy Kat, The Comic Art of George Herriman by Patrick McDonell, Karen O'Connell, Georgia de Havenon, Abrams, 1986); it's exactly because caricature debases things that Chris Ware said the following: "Artists like [...] myself, are all trying to tell potent stories with the tools of jokes. It's as though we're trying to write a powerful, deeply engaging, richly detailed epic with a series of limericks." (Dangerous Drawings by Andrea Juno, Juno Books, 1997: 33);
3., 4. the same comparison may be done here between a serious painting by Lyonel Feininger
(3. Vogelwolke [bird cloud], 1927) and one of his comics pages
(4. Wee Willie Winkie's World, 1906; detail; I find Wee Willie Winkie's World quite charming, though...).
PS Ernst Gombrich on caricature:
http://www.gombrich.co.uk/showdoc.php?id=85
PPS According to this site:http://www.business-opportunities.biz/projects/how-much-is-your-blog-worth/ The Crib is worth exactly $0.00. That's very disappointing! I thought that it was worth at least $1,00. Darn!...
Posted by Isabelinho at 4:03 PM