My 33 Favorite Comics - # 33: The Adjustment Of Sydney Deepscorn by Barron Storey

My Own Crib Sheet (almost ten years ago! Jeez!)

Preparing for this post I felt like David Hemmings (who played Thomas, the photographer) in Blow Up, by Michelangelo Antonioni. In fact, I did exactly what he did. I blew Barron Storey's panels up.

That's the end of this post though. Let's do the right thing and start from the beginning...

In the Comics Buyer's Guide # 1030, in his column "Comics Guide," Don Thompson reviewed Tales From The Edge # 1, the anthology in which Barron Storey published "The Adjustment Of Sydney Deepscorn." This is what he wrote about Barron Storey's work: "...". Exactly, he said absolutely nothing. It's a macabre irony, then, that Eric Reynolds published his article about Storey in the same issue of The Comics Journal in which Thompson's obituary appeared (it's also in this issue that an embarrassing letter from yours truly was published [blushes intensely!]).

I could either call Thompson a good representative of the fanboy mentality or a good representative of the direct market culture. Years ago I wouldn't hesitate, of course, "fanboy" it would be, for sure, but one mellows with age, so, let it be the direct market culture. Whatever the name that's not the point; the point is that all subcultures act in a defensive and parochial way. In this particular case it was powerful enough to put a blindfold on the so-called critic.

In a pre-graphic novel, pre-generalist bookstore, market; the world of the "comic book guy" (of The Simpsons and The Big Bang Theory fame) wasn't ready for such an oddity as Barron Storey's comics. Storey's collage aesthetic and no bullshit approach was too much for a highly bowdlerized world (and I use the word to mean both censorship and self-censorship). I don't mean that violence was (or is, because nothing changed) absent from comics sold in the direct market. On the contrary, comics are violent, but it's a cartoony, Bugs Bunny, kind of violence...

Barron Storey is an unlikely autobio comics artist. I seriously doubt that his name is cited in books about autobiographical comics (and, to my shame, apart from Shannon Gerard's thesis Drawn Onward: Representing The Autobiographical Self In The Field Of Comic Book Production I have never read any). But autobio artist he is being obsessed, during his comic book days, at least (more at the end of the post about this) with two things, mainly: his failed relationships with women and his mother's suicide (he said that both were linked). 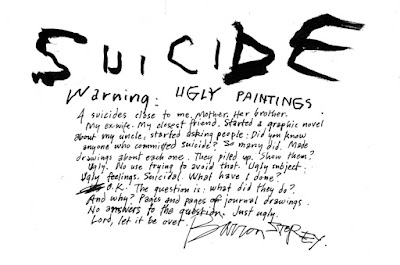 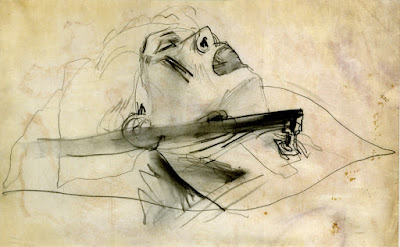 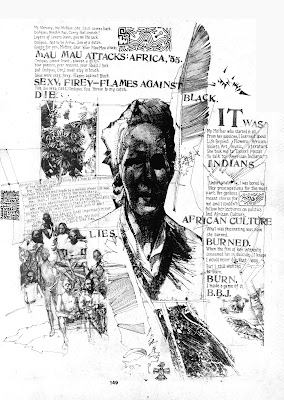 Peter Weiss's The Persecution and Assassination of Jean-Paul Marat as Performed by the Inmates of the Asylum of Charenton Under the Direction of the Marquis de Sade was a strange choice for an adaptation as autobiography. Weiss's play (or Weiss's play as seen by Peter Brooks et al in the filmed version) is a political rumination around the very important theme of the confrontation between reality (or realpolitik), represented by Sade, of course, and utopia (or revolution), embodied by Marat. This topic doesn't disappear from Storey's adaptation, but it is disconnected from the autobio parts: the psychological wound opened by the break up between Storey and someone named Kelly. The only link (and a very tenuous one at that) is, in Storey's own words in the Inkstuds interview (methinks), Charlotte Corday being a woman, killing Jean-Paul Marat, a man.

"Slidehouse," on the other hand, is a glorious failure of gargantuan proportions (something like Héctor Germán Oesterheld's and Alberto Breccia's version of "El Eternauta" in Gente magazine). "Slidehouse" failed because Barron Storey was extremely disappointed when it didn't produce the stir he hoped for in the comics milieu. 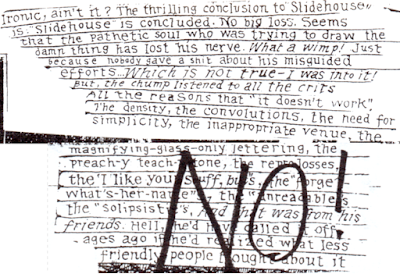 Barron Storey, "Slidehouse," Tales From The Edge! # 5, February 1995 (top and bottom of a page.)
The "No!" above is the answer to the question: Is this the end?
As for "what less friendly people thought about it," they thought nothing at all, as we've seen already.

Another problem, if it is one, is the relation between the artwork and the content. If real life is important to Barron Storey, why disguise it in fantasy garments? To draw what he called the Slidehouse, for instance, Storey drew his inspiration from The Lusty Lady, a peep show in San Francisco which appears as a Piranesi nightmare in "Slidehouse" (linking peep show and prison, perhaps, but what a magnificent prison it is... also, the peep show goer is someone who watches, which is exactly what the artist does). There's also a demon which is, in reality, a robot, and everything, from the "Adjustment of Sydney Deepscorn" to the last instalment of "Slidehouse" seems drawn from the feverish imagination of an H. R. Giger (Alien is one of Barron Storey's favorite movies, I guess).

This provokes a divorce of sorts between form and content. I'm speculating, but could it be that Barron Storey wanted to compromise creating a super-heroine, Assassi(nada), wanting to sell-out, the only problem being that no one was buying? 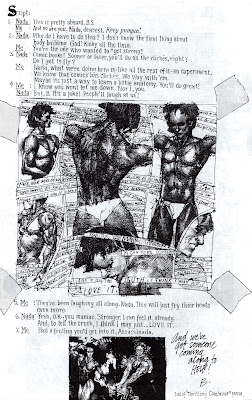 Barron Storey, "Slidehouse," Tales From The Edge! # 5, February 1995.
In this page, written and drawn in tongue-in-cheek mode, Assassi(nada) works out to be a super-heroine. 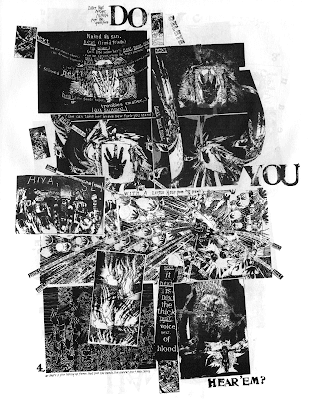 
And yet, look at the above page! There's nothing incoherent, or strange, or particularly gothic or sci-fi about it. I find it extremely emotional. In the dubious case that I need to explain it to you, continue reading below (if not, skip it): 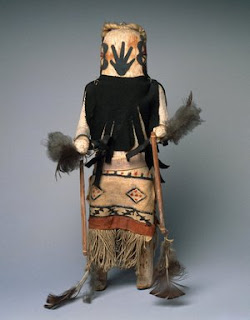 This kachina doll represents one of the Anahoho Kachinas, a pair of strangers sent by the gods to search for the middle of the Zuni world. They were accompanied by fierce Salimopea Kachina warriors. People were afraid of the warriors and hid their possessions on the rooftops, but the Salimopea threw the belongings down and destroyed them. When the Anahoho returned to their village, they found it burned and their brother Kiako missing. In sorrow they smote their faces with soot-blackened hands, leaving a handprint, as seen here.

Barron Storey's work uses symbolism to tell personal stories. The Anahoho Kachina explains, not only this page, but also why Barron Storey's sketchbooks are full of hands. Why the Kachinas, though? You can find that out in the B. B. J. page above.

In "The Adjustment of Sydney Deepscorn," the fantasy genre element is equally present. But the autobio parts are less hidden. If the drawings tell the story of a final judgment, more than adjustment, the words tell it like it is. And that's exactly where the blow up part enters this post. 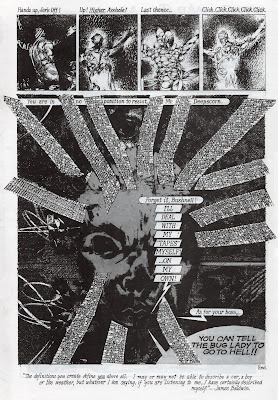 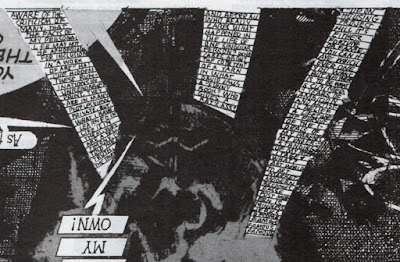 Barron Storey, "The Adjustment Of Sydney Deepscorn," Tales From The Eddge! # 1, June 1993.

The most impressive pages of "The Adjustment Of Sydney Deepscorn" are about racism though. In the words of Robert Wilonsky:

[In "The Adjustment Of Sydney Deepscorn" there are] repressed memories of a childhood spent running with "gun-toting idiots" who liked to shoot at the "niggers" in South Dallas[.]

More than twenty years passed since Barron Storey tried to express himself using a medium that, in his own words, "you [the comics reader] persist in overrating [overrating also] its practitioners thereof." His most recent publishing venture is Trumped. Maybe, after all this time since his Marat / Sade book, he finally did something political? A Poor Richard for the 21th century?

Posted by Isabelinho at 8:19 PM